Tony Stewart at Bristol: When the going gets tough…

Stewart and Co. head to Bristol (Tenn.) Motor Speedway, a .533-mile, high-banked, concrete bullring where racing has been compared to flying fighter jets in a gymnasium.

KANNAPOLIS, N.C., (March 11, 2014) – The expression “When the going gets tough, the tough get going” can easily apply to Tony Stewart and the No. 14 Bass Pro Shops/Mobil 1 team of Stewart-Haas Racing.

Stewart’s toughness has been on display for the last six months as the three-time NASCAR Sprint Cup Series champion has come back from a severely broken right leg suffered in a sprint car crash last August. Stewart has undergone three surgeries, endless physical rehabilitation and the pain associated with each. 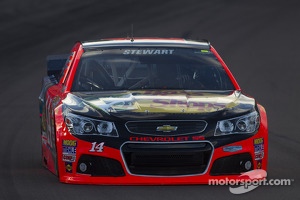 It was a triumph to see him back behind the wheel of his signature No. 14 Bass Pro Shops/Mobil 1 Chevrolet SS in the season-opening Daytona 500 on Feb. 23, but the result – a 35th-place finish due to a fuel pickup problem – was not the outcome Stewart expected. A 16th-place finish the following week at Phoenix International Raceway was not indicative of how Stewart or his racecar performed, but nonetheless it was the result when the checkered flag waved. Then this past Sunday at Las Vegas Motor Speedway, Stewart dealt with an ill-handling racecar that left him an uncharacteristic 33rd.

Now, Stewart and Co. head to Bristol (Tenn.) Motor Speedway, a .533-mile, high-banked, concrete bullring where racing has been compared to flying fighter jets in a gymnasium. That Stewart’s track record at Bristol has been feast-or-famine makes the upcoming Food City 500 even more daunting.

But history shows that Stewart rises to a challenge. His USAC “Triple Crown” victory in 1995, where Stewart won the Sprint, Midget and Silver Crown titles in a single season, came because in the last race of the season, Stewart overtook Silver Crown favorites Jack Hewitt and Dave Darland to win the championship by two points. More recently, Stewart won the 2011 NASCAR Sprint Cup Series championship in epic fashion by winning five of the season’s last 10 races, taking the title in a tiebreaker over Carl Edwards. And in between those two championships, Stewart proved pundits wrong by becoming a successful driver/owner in the Sprint Cup Series when he won on June 7, 2009 at Pocono (Pa.) Raceway seven months after leaving the comfy confines of Joe Gibbs Racing, where Stewart had spent his first 10 years as a Sprint Cup driver. It was the first point-paying Sprint Cup win by a driver/owner since Sept. 27, 1998 when Ricky Rudd won at Martinsville (Va.) Speedway.

You have three races under your belt since coming back from your injury. Now, you head to one of the more physically demanding tracks in Sprint Cup – Bristol Motor Speedway. Did you have any fear in coming back to racing and how do you feel coming into Bristol? “The fear was not getting back out. Being out of my Bass Pro Shops/Mobil 1 Chevy is what bothered me more than anything. I’ve had injuries before. I’ve had broken hands and raced dirt cars and stock cars. I’ve had broken bones that weren’t healed 100 percent and still went out and did what we needed to do. This was just a bigger setback. This was one that I didn’t have a choice of being in the car and fighting through it. This was one where the ante was up a little bit.

“Honestly, there hasn’t been one day or night where I’ve sat and questioned whether it’s what I wanted to do or whether it was something I could do. It was just, when can we do it? I just want to be 100 percent, and we’re pushing toward that. The passion and desire I have for the sport, that’s never wavered, and that’s what gets you through some of this stuff.

“People that want to compete, want to compete. They fight through injuries, they persevere, they work hard to get back where they want to be, and this is no different. There’s nothing about this process that has taken away my desire to do what I want to do. You don’t live for what could happen, you live for what you can make happen.”

Has the injury and the time spent out of a racecar allowed you to view certain aspects of the sport differently? “It’s been different just from the standpoint that in all the other cases I was just a driver who was trying to heal up from an injury. With this injury, I was in a period where my driving was put on hold, but I could still stay active as an owner. It gave me an opportunity to take a different role on a race weekend and be able to do things that I wouldn’t be able to do or see as a driver. It’s given me a perspective that’s a little bit different. I think it’s made me a stronger owner because I had to sit in a different role for six months. It’s a perspective that I probably needed to see but didn’t have the capability with my role as a driver every weekend. I feel like I’m a little more well‑rounded. It doesn’t mean I’m a great owner yet, but I feel like going to the track last fall where I wasn’t inside a racecar all the time gave me insight that’ll help me down the road.”

Beyond coming back from your injury, you’ve had a rough start to this season just from a results standpoint. Is it different when you’re searching for answers as a driver-owner versus being just the driver? “No. I still have to get in there on race day and put my helmet on and try to figure out why the car won’t do what I want it to do. It’s not any different. You still work just as hard.”

You’ve had to work really hard at Bristol of late. You enjoyed success there early in your career, but the track has proven to be a challenge in recent years. Why? “It’s a track where we’ve struggled. We’ve led a lot of laps there but we just don’t have the wins to show for it. It’s a track I definitely like. Everybody goes, ‘How can you like it when you’ve not had any success there for a while?’ To me, that’s just motivation. It gives us the ambition to be successful.”

Can you summarize your history at Bristol? “Bristol is one of those places where you’ve got to have everything kind of go your way. If you have one hiccup, it’s hard to recover from it. We’ve only won one race there and we’ve kind of been all over the board. It’s been feast or famine for us. It’s like if you have one problem in the first half of the race, it’s hard to recover from it. It makes for a very long day. We’ve had more long days than good days.”

How miserable is it when you get several laps down at a track like Bristol? “It’s a place where it’s hard to have a good day. There are so many variables that can go wrong at Bristol versus other tracks. If you have that one bad incident that gets you in the back, it’s hard to recover from that. There are guys who have done it and do a good job at it, but you have to have a great racecar to be able to recover from something bad, especially if you get laps down. It’s like going from the bottom of the mountain and climbing and climbing and not getting anywhere. You fight and fight and fight and at the end of the day you’re right where you were when you had your problem.”

You will be making your 30th career Sprint Cup start Sunday at Bristol. What stands out during your years of racing at Bristol? “It’s a hard race to win. You look at guys like Rusty Wallace who had so much success and won so many races there, it shows you how good you have to be to win and win there consistently. It only takes one minor incident to screw up your day. You would think being a short-track race that if you have a great car you can get there, but normally one small mistake will take that opportunity away from you. Seems like you have better odds of something happening that keeps from you winning than you do of actually winning.”

Danica Patrick at Bristol: Looking to get found