A few NASCAR Sprint Cup Series teams, mainly also-rans looking to claim a position in the top-35 in owner points, will make changes to their driver lineups this weekend as the series heads to Infineon Raceway in Sonoma, Calif., for road course racing on Sunday. When the field takes the green flag for the Toyota/Save Mart 350, road course "ringers" expected to start the race include Tony Ave in the No. 38 and Tomy Drissi in the No. 37 in Fords from the Front Row Motorsports stable; P.J. Jones in the No. 77 Dodge fielded by Robby Gordon Motorsports; Andy Pilgrim in the No. 46 Chevrolet owned by Tommy McMillan; Boris Said in the No. 51 Chevrolet of Phoenix Racing and Brian Simo in the No. 81 Chevrolet of Whitney Motorsports.

I think a lot of it is that when we get to a road course, we look forward to being there.

While the aforementioned drivers are typically aces when it comes to racing on road courses, the road course ringers haven’t been able to show in the last several years that they can overcome their lack of experience in a NASCAR race car to provide much competition for series regulars.

When it comes to road racing at the Sprint Cup level, Tony Stewart, driver of the No. 14 Stewart-Haas Racing Chevrolet, has been the crème de la crème in the last decade. In his Cup career that began in 1999, Stewart has tallied 24 starts on road courses. He has finished first or second in almost half of those races -- 11. Seven of those 11 races ended with trips to victory lane.

“I just like road courses,” Stewart said. “I’ve always like Sonoma, It’s really a driver’s track. It’s tough to make your car drive perfect all day. You can have a really good car, but it’s going to slide around, and you’re going to struggle for grip, and that’s what makes it so fun. You have to do the work behind the steering wheel.”

Stewart has 12 previous starts under his belt at Infineon. He has finished in the top-10 after two-thirds of those starts -- eight times -- including two wins and four top-five finishes.

“It’s definitely a place I feel like we’ve got the potential to win, even before we make a single lap,” Stewart said. “We seem to have taken to the road racing side of it fairly well and just have had good luck with it. I don’t know that there’s a secret to it, necessarily. I think a lot of it is that when we get to a road course, we look forward to being there.”

The only driver in the Sprint Cup Series with road course results comparable to Stewart’s is Jeff Gordon, driver of the No. 24 Chevrolet for Hendrick Motorsports. In the 36 road course races that Gordon has competed in his Cup career, he has won nine times -- the most of any driver -- posted 17 top-fives and 23 top-10 finishes. Gordon has five wins at Infineon on his racing resume to go along with 11 top-fives and 14 top-10 finishes in 18 starts there. 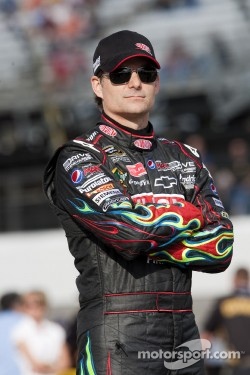 But Gordon’s road course dominance came several years ago. Stewart has since taken over as the series’ road course kind in recent years. Gordon has noticed that he hasn’t been stealing the show lately when it comes to turning both left and right.

It just so happens that Stewart and Gordon also are the top-two drivers on the outside of the top-10 in championship points looking in heading into Sunday’s race in Sonoma. Stewart finds himself in 11th, only one point out of 10th, while Gordon sits in 12th, 17 points outside the top-10. Gordon does already have two wins to his credit this season, putting him in a fairly comfortable position as far as earning a wild car spot goes, should he not make his way into the top-10. Stewart, on the other hand, is still looking for his first win of the year.

Both Stewart and Gordon are considered favorites any time the Sprint Cup Series goes road course racing, and it’s easy to understand why. The two drivers are not only the most successful at road courses among their current counterparts, but also among the all-time greats when it comes to NASCAR road racing.

The green flag is scheduled to wave for the Toyota/Save Mart 350 at approximately 3 p.m. ET on Sunday. The race can be seen live on TNT, with coverage beginning at 2 p.m. ET. It can also be heard on PRN and Sirius XM channel 90.