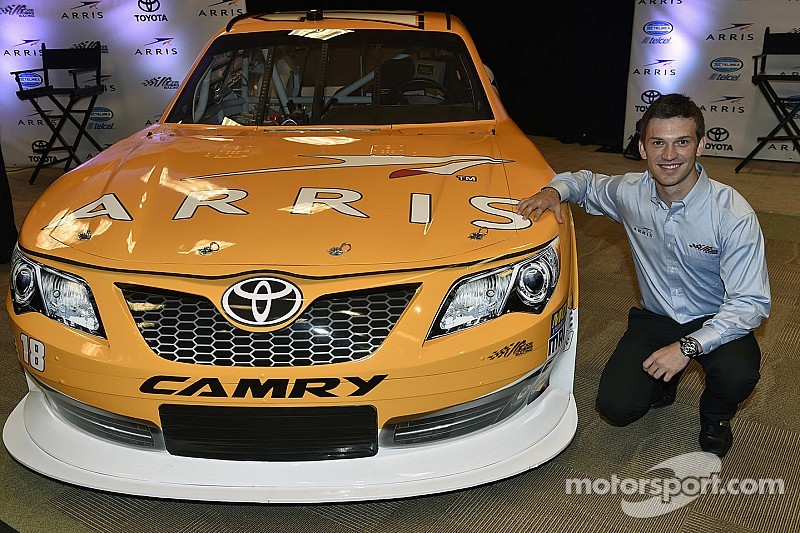 There are some very young drivers doing some very remarkable things in NASCAR's lower divisions.

NASCAR's future is looking bright with the number of talented young drivers moving up through its lower divisions.

Whether these drivers are coming up through the NASCAR K&N Pro Series East or West divisions, the ARCA Racing Series, or in the late model divisions from around the country, there is no shortage of talent in sight.

A. A driver must not have attempted every single race in any given NASCAR national series season.
B. Said driver must also be under 25 years of age.

This list could have easily stretched into a top-20, but for the sake of convenience, I've whittled the list down to a top-10.

So, without further ado, here is my ranking of NASCAR's top-10 prospects heading into the 2015 season.

Despite coming up just short of winning this year's K&N Pro Series West championship, Lupton put in a statistically solid season with Bob Bruncati Racing. In 14 starts this year in the series, Lupton came home with nine top-fives and a win a Kern County Raceway Park along with top-10 finishes in all 14 races. Only two other drivers in the past decade have been able to accomplish the feat of completing every race of a K&N West season in the top-10 - Cameron Hayley, and XFINITY Series regular Dylan Kwasniewski. Lupton is expected to announce his 2015 plans soon.

Hill was the hottest driver of the K&N Pro Series East in the final stretch of the season, winning at Greenville and Dover to close out the year. Other than his two wins, Hill racked up five other top-fives and eight other top-10s on his way to a fifth-place finish in the final points standings. Hill was also able to turn some heads with Ricky Benton Racing in the Camping World Truck Series after leading 21 of 200 laps at Martinsville in October. Although he wasn't able to get the finish he may have been looking for at Martinsville, he certainly showed that there is plenty of speed in this member of the NASCAR Next Class of 2014.

After an extremely competitive season in the K&N Pro Series West in 2013, Hayley tried his hand at a full-time schedule in the K&N Pro Series East with Turner Scott Motorsports in 2014. In his first full-time season in the K&N East Series, Hayley finished second in the championship standings to teammate Ben Rhodes with seven top-fives and nine top-10s accumulated in 16 races. Buoyed in the championship standings by his ability to complete every race while running at the finish, Hayley has a good foundation to work off of for 2015 as he goes for the K&N East title with HScott Motorsports with Justin Marks.

A winner in the K&N Pro Series East and in Mexico's NASCAR Toyota Series in 2014, Suárez has plenty of winning experience on his side heading into his first full-time season in the XFINITY Series with Joe Gibbs Racing in 2015. This year, Suárez grabbed two wins in the opening events of the K&N East season at New Smyrna and Daytona and five wins in the Toyota Series with his first win of the year in the NTS coming at Phoenix. Although he didn't win the title in either series, Suárez showcased plenty of ability to stay out front with his plethora of victories in both series. Other than the XFINITY Series, Suárez will make several Camping World Truck Series starts for Kyle Busch Motorsports in 2015.

The son of 1992 XFINITY Series champion Joe Nemechek, John Hunter Nemechek has been on quite the roll as of late in late model races after winning the All American 400 in November and the Snowball Derby on December 7th. John Hunter's All American 400 and Snowball Derby wins set the second-generation driver up for a strong 2015 in the Camping World Truck Series - where he plans on running part-time until his 18th birthday. This year in the Truck Series, the younger Nemechek had one top-five and six top-10s in 10 starts for family-owned SWM-NEMCO Motorsports.

Running an incredibly consistent season in his own equipment, it was no surprise to see Mitchell crowned as this year's ARCA Racing Series champion. Completing one of the statistically-best seasons in the series in recent history, Mitchell compiled a record of 12 top-fives, 18 top-10s, and a single win at Chicagoland Speedway in 20 starts on the road to the title. Noted for driving with a mature driving style that has kept him out of trouble on the track, Mitchell's natural ability and quick thinking behind the wheel make him a valuable asset to any team. As of the time of this post, Mitchell has not yet announced his driving plans for the 2015 season.

A winner this year in both the K&N Pro Series East and ARCA Racing Series, Jones' early success in his career and his driving style point to a potentially lengthy career for this up-and-comer. Scoring one win at Iowa, five top-fives, and 11 top-10s in 16 starts in the K&N East Series and two wins at Winchester and Lucas Oil Raceway with a third-place finish at Madison in ARCA, Jones had no shortage of success in both series in 2014. Part of his success could be attributed to his driving style, a style that leans slightly more towards using aggressive tendencies to advance track position with not much hesitation to put the bumper on a driver - reminiscent of the style of say, Tony Stewart. Jones will race a part-time schedule for Richard Childress Racing in the XFINITY Series next season.

Coming off of a championship-winning year in the NASCAR K&N Pro Series East, Rhodes put in one of the statistically-best performances of a series champion in recent years. Scoring five victories, 11 top-fives, 13 top-10s, and six pole awards with an average finish of 5.8 on the road to the K&N East title, Rhodes flat-out dominated the series - clinching the title with one race to go in a 16-race schedule. He has also showcased plenty of speed in four Camping World Truck Series, coming home with three top-10s and a single top-five. A quick learner with natural pace, Rhodes' future looks bright heading into 2015 and a partial schedule in the XFINITY Series with JR Motorsports.

Already a four-time race winner in 17 career Camping World Truck Series starts, Jones has shown an incredible prowess at driving a stock car at the national level at such a young age. Jones' accolades don't stop at the Truck Series as he is also a two-time winner of both the Winchester 400 and Snowball Derby - two of the most prestigious short track races in the country. While Kyle Larson and Chase Elliott have received most of the praise in terms of drivers being pointed to as NASCAR's next big thing, Jones possesses the talent - and the record - to earn the honors of being viewed as both drivers' equal. Jones will race full-time for Kyle Busch Motorsports in the Truck Series in 2015.