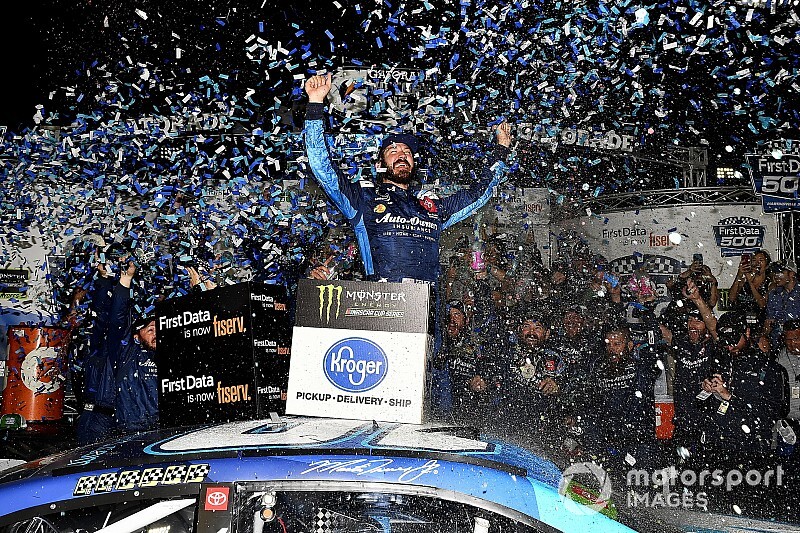 Martin Truex Jr. becomes the first driver to lock himself into a chance to win the 2019 NASCAR Cup Series championship at Homestead.

Truex held off a furious late-race charge from William Byron over the final 24 of 500 laps to win Sunday’s First Data 500 at Martinsville (Va.) Speedway.

Until Byron got hot at the end, Truex left little to doubt in this one, leading a career-high 464 laps on his way to seventh win of the season, 20th of his career and first at Martinsville.

Until this season Truex had never won on a short track and Sunday’s win was his third on a track less than a mile in length.

"I can't believe we just won Martinsville, man. Miami is awesome, but we've wanted to win here for a long time, but the guys have worked so hard, I've worked so hard," Truex said after the race. "I used to just be terrible here, and just an awesome bunch of guys. To get a grandfather clock is pretty special.

"I don't think anyone expected that. This race track in general, you don't see that. Hats off to my eyes. Pit crew was stellar today, and we didn't make many adjustments. We adjusted on early and it came to life, and that was a lot of fun.

"I don't know, maybe now I've got this place figured out, who knows. But just really proud of everybody, and after last year, everybody wants to keep talking about last year, and I'm like, 'We've got work to do.' I'm just proud of everybody for giving me a race car like that and being able to put it all together today when it counted."

Asked if Sunday's result helped overcome the disappointment of last season, Truex said: "I'll let you know in a few weeks. The cool part is we're going to Homestead again, and that was what we tried to accomplish this weekend.

"We don't have to worry about points anymore, we can just get to work on our Homestead car.  Just honestly, I'm so excited and proud to drive this thing, and our team is unbelievable."

Joey Logano and Hamlin had a verbal confrontation on pit road after the race that briefly turned physical and involved crew members from both teams.

Following the break between Stages 2 and 3, most of the lead-lap cars stayed out. On the restart on Lap 269, Truex was followed by Blaney, Logano, Arc Almirola and Byron.

Larson, among those who pit, restarted 18th.

On Lap 286, Logano got alongside Blaney and nudge him out of the way to take over the second position.

With 200 laps remaining in the race, Truex had built a more than 3-second lead over Logano. Byron had moved into third, Blaney ran fourth and Almirola was fifth.

Byron worked his way around Logano on Lap 327 to move into the second position, 3.9 seconds behind Truex.

NASCAR threw a caution for debris on Lap 346 after Austin Dillon and Ricky Stenhouse Jr. made contact and Dillon had a right-side tire go down.

All of the lead-lap car elected to pit with Truex the first off pit road. When the race returned to green on Lap 353, Truex was followed by Blaney, Byron, Logano and Kyle Busch.

Shortly after the restart, Byron got around Blaney and took over the second position.

Caution was displayed on Lap 362 when Aric Almirola and Kyle Busch collided coming off Turn 4 and collected several other drivers in a pile-up including Larson, Jimmie Johnson, Matt DiBenedetto and Ryan Preece.

A handful of cars elected to pit but Truex remained on the track and remained in the lead when the race returned to green on Lap 373. He was followed by Byron, Blaney, Logano and Hamlin.

Daniel Suarez and Alex Bowman got into each other off Turn 4 on Lap 377 to bring out another caution. On the restart on Lap 383, Truex led followed by Blaney and Hamlin.

With 100 laps remaining, Truex held about a 2-second lead over Blaney as Byron had moved up to third. Hamlin ran fourth and Logano fifth.

After 345 laps, Truex’s advantage had grown to more than 4 seconds over Blaney. Byron ran third, Hamlin fourth and Logano fifth.

On Lap 448, Bowyer spun after his left-rear tire went down. His No. 14 Ford had developed a bad tire rub the lap before.

All of the lead-lap cars elected to pit with Truex once again the first car off pit road. The race returned to green on Lap 456 with Truex out front followed by Blaney, Byron, Logano and Hamlin.

After developing a tire rub and tagging the wall, Logano spun out in Turn 1 on Lap 459 to bring out a caution.

The race returned to green on Lap 466 with Truex out front followed by Byron and Blaney.

Michael McDowell hit the wall in Turn 4 on Lap 472, once again putting the race under caution. On the restart on Lap 477 Truex led the way followed by Byron, Blaney, Keselowski and Hamlin.

With 10 laps remaining, Byron had closed to within about a half-second of Truex but didn’t appear to be able to challenge for the lead.

Almirola promises to "make it hell" for Kyle Busch