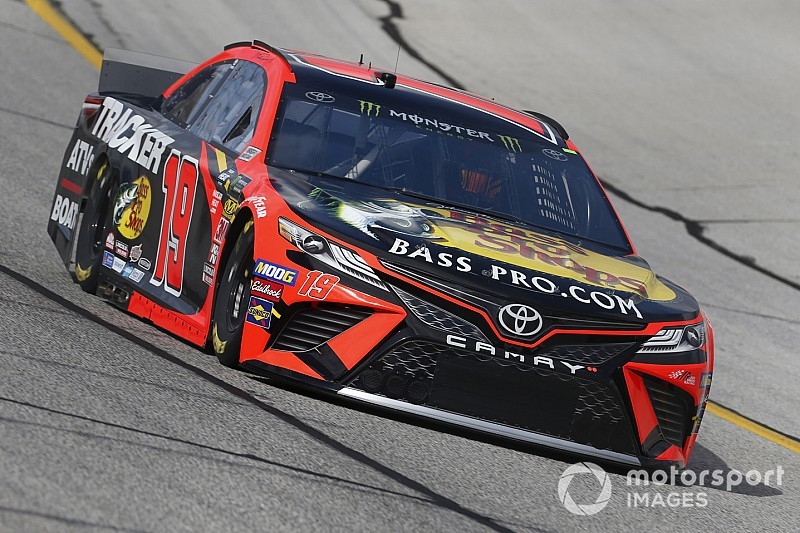 Martin Truex Jr. escaped what would have been a disastrous late-race penalty and almost managed to catch Brad Keselowski for the win at Atlanta.

Truex appeared to have the fastest car late in Sunday’s QuikTrip 500 at Atlanta Motor Speedway but felt his progress to the front was stymied repeatedly by lapped traffic.

“It was just lapped cars. It was a shame we got put in that position on that last restart but that’s the way the caution fell,” Truex said after the race. “Just (Ricky Stenhouse Jr.) rode there in front of us forever and ever running the bottom (lane), and I kept telling him I needed the bottom

“These cars are just so bad in dirty air that he was holding me up really bad. Once I got around him, I got to (Keselowski) in two laps. I just needed one more.

“Unfortunate we had a great car, and like I said, the guys did a great job. Just a little upset. We had the best car. We probably should have won that one.”

Sunday’s runner-up finish was still an important step forward from last week’s Daytona 500, in which Truex finished 35th and wrecked out after 190 of 200 laps.

“I’m really proud of the team. Great rebound after last weekend,” Truex said. “They built a great race car here, and man, I could taste that one.

At one point late in the race it appeared Truex would not even be in contention for the win.

Ryan Preece and B.J. McLeod wrecked on pit road on Lap 272 of 325 in the middle of green-flag pit stops, which brought out a caution and jumbled the lineup.

Truex was one of the cars on pit road at the time and after the completion of his stop, NASCAR officials over the radio called out a penalty on his team for having a crew member over the wall too soon.

To serve the penalty, Truex would have had to restart from the rear of the field, which would have likely knocked him out of contention for the win.

But when the race returned to green on Lap 282, Truex remained lined up in fourth while several teams questioned over their radios why he was not dropping to the rear.

After the race, NASCAR officials said after a review of video footage of Truex’s pit stop, race control officials decided to rescind the penalty, but failed to make a public announcement to that effect.

Keselowski: "Tremendous honor" to get Mustang its first Cup win