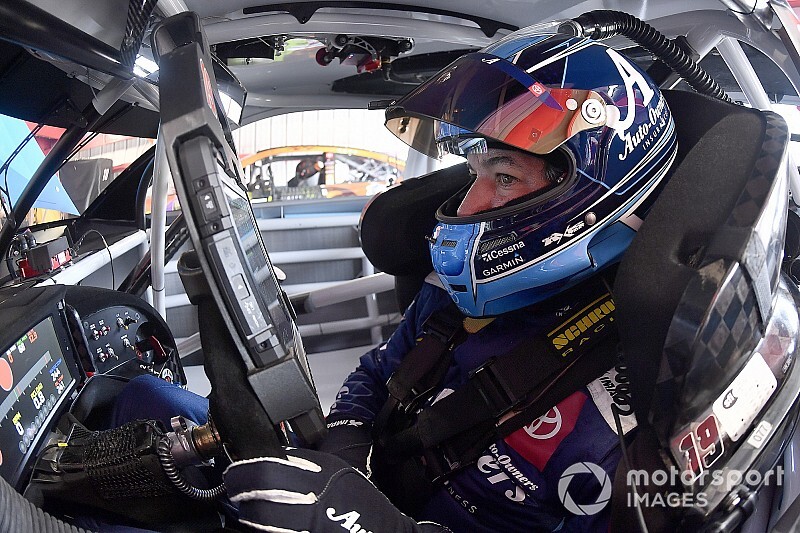 Martin Truex Jr. passed Kyle Larson on the last turn of the last lap to complete a sweep of the first two stages at Martinsville (Va.) Speedway.

Larson stayed out while everyone else pit and led on a restart with three of 130 laps in the stage, but Truex caught him on the last lap and dove to his inside and edged him at the line.

Following the break between Stages 1 and 2, all of the lead-lap cars elected to pit with Truex once again the first off pit road.

When the race returned to green on Lap 140, Truex was followed by Hamlin, Blaney, Clint Bowyer and Logano.

Bowyer quickly moved into second after the restart, Byron to third and Chase Elliott entered the top-five.

Alex Bowman pit on Lap 153 under green to change his right-side tires. His team determined he had a loose wheel.

Byron moved into the second position on Lap 165 as Bowyer dropped to third.

On Lap 178, Ty Dillon wrecked off Turn 4 turning down in front of Daniel Hemric to bring out a caution. All of the lead-lap cars elected to pit again with Truex the first of pit road.

Elliott was slow exiting pit road and radioed his team that he may have a broken axle. Before the race returned to green, he pit again while his team attempted to replace the right-side axle as the race resumed.

When the race went green on Lap 185, Truex remained in front followed by Bowyer Blaney and Byron.

Elliott took his No. 9 Chevrolet to the garage for more extensive repairs on Lap 197.

With 50 laps remaining in the stage, Truex held a small but steady advantage over Bowyer while Blaney ran in third. Byron was fourth and Logano fifth.

After 230 laps, Truex’s lead over Bowyer had grown to almost 1-second. Blaney remained close behind in third as Logano moved into the fourth spot.

On Lap 234, Blaney got around Bowyer to take the second spot.

Elliott returned to the race on Lap 236, 52 laps down from the leader.

Bowyer was forced to pit under green on Lap 247 with a flat right-rear tire.

On Lap 252, Bowyer spun and slowed on the track to bring out a caution after his team mistakenly changed his two left-side tires instead of his right-side tires during his stop.

Almirola promises to "make it hell" for Kyle Busch