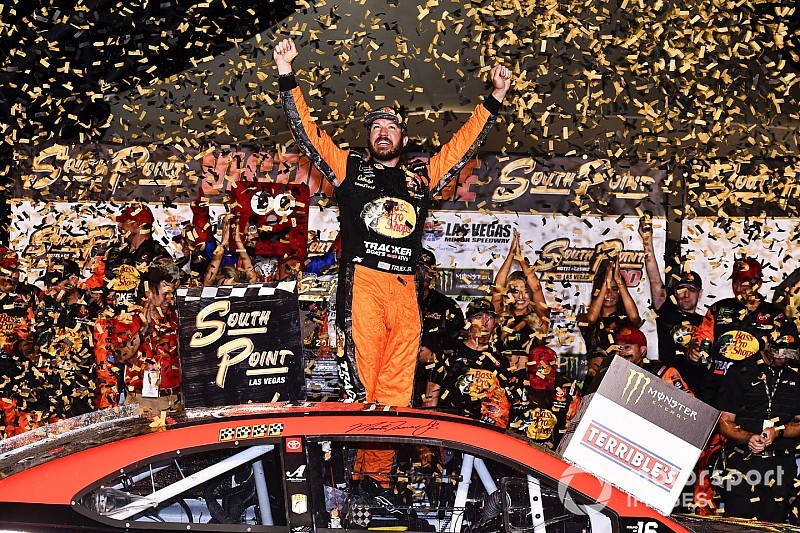 Martin Truex Jr. hadn’t won since June but he showed Sunday he will be a factor in this 2019 NASCAR Cup Series title battle.

Truex passed Kevin Harvick with 20 of 267 laps remaining and went on to cruise to victory in Sunday night’s South Point 400 at Las Vegas Motor Speedway, taking the first win in the 2019 NASCAR Cup Series playoffs.

Truex had won four times this season but his most recent victory came in June at Sonoma, Calif., and had not finished better than 13th in the last three races.

The win is the 24th of his career and the victory locks Truex into the second round of the playoffs regardless of how he finishes in the next two races.

"The magic was back today, that's for sure," Truex said after the race. "We took a gamble this weekend; thanks to everybody back at the shop. We took a gamble and qualified 24th and for a while there we weren't looking too smart.

"We got the right adjustments at the end and had a great car all night long. I want to thank everyone who makes this happen for us. We're on our way to making a championship run. We'll get a lot of points and go to the next round.

"That run before when (Harvick) was just running away from us we got too loose and I had to baby it for too long. I told (crew chief Cole Pearn) that he needed to tighten me up some more so I could hustle.

"We hustled all the way to the checkers and got the job done there."

Following the break between Stages 2 and 3, all of the lead-lap card elected to pit with Truex the first off pit road.

During the pit stops, Larson was penalized on his pit stop for a safety violation and had to restart from the rear of the field.

On the restart on Lap 168, Truex was followed by Logano, Elliott, Harvick and Bowman.

On Lap 180, shortly after reporting a tire rub, Byron spun off Turn 4 to bring out a caution. All of the lead-lap cars elected to pit and Hamlin – thanks to a two-tire pit stop – was first off pit road.

Austin Dillon was penalized for an uncontrolled tire penalty during his stop and had to restart from the rear of the field.

On the restart on Lap 186, Hamlin led the way followed by Blaney, Newman and Daniel Suarez (all on two tires) and Harvick was fifth, the first on four new tires.

On Lap 188, Kurt Busch had a tire go down and hit the Turn 3 wall hard to bring out a caution.

Several lead-lap cars elected to pit but Harvick remained on the track and led on the restart on Lap 196. He was followed by Blaney, Newman, Truex and Denny Hamlin.

With 60 laps to go in the race, Harvick had moved out to a 2.3-second lead over Truex as Blaney ran in third. Keselowski moved up to fourth and Bowman ran fifth.

Keselowski – who wasn’t in contention for the win most of the race – moved up to third with 50 laps to go. Harvick remained out front with a comfortable 4-second lead.

Several cars began a final round of green-flag pit stops on Lap 229. Once the cycle of stops was complete on Lap 246, Harvick remained in the lead but with only slight advantage over Truex.

On Lap 247, Truex was able to get around Harvick on the outside and claim the lead for himself.

With 10 laps remaining, Truex had pulled out to a 2.2-second lead over Harvick as Keselowski ran in third.