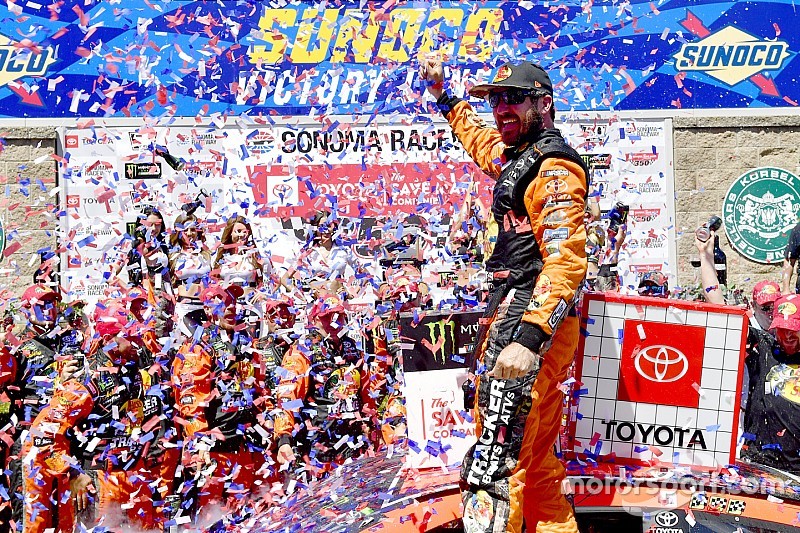 "I just dug down deep and tried to be smooth and hit my marks," Truex said of his approach to keeping Busch at bay. "Luckily I began with a big enough gap where I could get away and not feel too much pressure.

"It was definitely battle going on as far as the race there at the end for us on tires. It felt terrible the last 20 laps. The last 10 it just felt like it was on ice - just no grip anywhere. I'm really proud on all these guys and everyone on this team and everyone back at JGR.

"What a season we've turned this into. This is great, man, unbelievable. Hopefully, we can keep it going."

"Big thank you to 'DW' for all you've done for us buddy. It's been an honor to watch replays of you calling races and stuff. I've been a big fan for a long time. I wish you the best going forward," he said.

Following the break between Stages 2 and 3, those that did not pit in Stage 2 headed down pit road which allowed Truex to inherit the lead.

On the restart on Lap 45, Truex was followed by Chase Elliott, Kyle Busch, Joey Logano and Larson.

Kyle Busch got into the back of Blaney and nudged him out of the way to take third on Lap 47 of 90. Busch’s No. 18 Toyota did suffer some significant damage on the nose.

After 50 laps, Truex held about a 1.5-second lead over Elliott as Kyle Busch remained in third. Blaney ran fourth and Daniel Suarez was fifth.

On Lap 51, Kyle Busch got around Elliott in Turn 7 to move into the runner-up position.

Ryan Preece spun around in Turn 11 on Lap 52 after contact from Ricky Stenhouse Jr. but was able to continue on without incident.

After 55 laps, Truex had opened up almost a 2-second lead over Kyle Busch as Elliott ran in third. Blaney was fourth and Suarez continued to run fifth.

With 30 laps remaining in the race, Truex maintained a more than 2.8-second lead over Kyle Busch. On Lap 61, Stenhouse became the first driver to make his final stop in the race and was quickly followed by William Byron.

On Lap 61, Elliott headed down pit road after saying “blew up, blew up” on his radio. Once in his pit stall, Elliott’s crew went under the hood of the No. 9 Chevrolet looking for the problem.

Elliott’s crew eventually pushed his car to the garage.

Suarez was penalized for an uncontrolled tire during his pit stop and had to come back around and to serve a pass-through penalty.

Kyle Busch inherited the lead on Lap 64 as Truex made his pit stop.

Busch finally dropped to pit road to complete his stop which allowed Truex to reclaim the lead on Lap 68.

Once everyone had completed their stops, Truex’s lead over Busch had expanded to more than eight seconds. Blaney ran third, Harvick fourth and Jimmie Johnson was fifth.

With 15 laps remaining in the race, Truex’s lead over Kyle Busch had fallen to 3 seconds as Blaney ran in third. Harvick remained fourth and Johnson in fifth.

Logano was forced to pit on Lap 76 and a battery was changed on his No. 22 Ford. He had been having alternator problems during the race.

With 10 laps to go, Truex maintained a 1.5-second lead over Kyle Busch with Blaney running in third. Harvick was fourth and Johnson fifth.

After 85 laps, Truex’s lead was down to around a second over Kyle Busch. Blaney was third, but nearly 25 seconds behind the leader.

On Lap 87, DiBenedetto got around Harvick to move into the fourth position.

The win is Truex's third at Sonoma (and second consecutive) and 23rd of his Cup Series career.