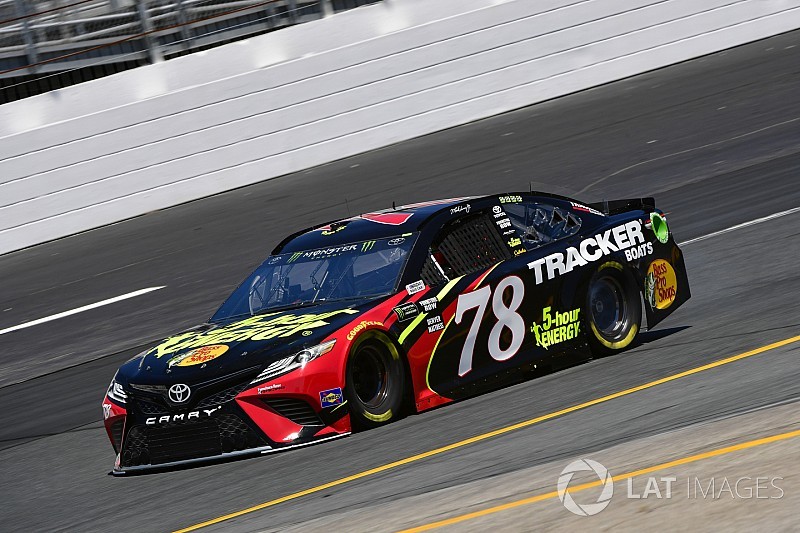 The race finally got underway at 4:24 p.m. ET after a nearly 3½-hour rain delay.

Kurt Busch, the pole-winner, took early charge of the race with Truex remaining close behind.

Landon Cassill hit the wall in Turn 3 on Lap 14 to bring out the first caution. Just a handful of cars elected to head to pit road. The race returned to green on Lap 18 with Kurt Busch still leading the way.

On Lap 20, A.J. Allmendinger spun and hit the wall in Turn 1 to bring out another caution. Allmendinger appeared to have a left-rear tire go down to trigger the incident.

The race returned to green on Lap 24 with Kurt Busch leading and Denny Hamlin moved up into second. On the restart, Kyle Busch powered into the second position behind his brother.

After the completion of 35 laps, NASCAR threw a competition caution to allow teams to check tire wear from the heavy rain overnight and earlier in the day.

Most of the lead-lap cars elected to pit for fuel and tires but Ricky Stenhouse Jr. was among those who stayed out and inherited the lead on the restart on Lap 40. He was followed by Johnson and Matt Kenseth. Truex, the first car off pit road, lined up fifth.

By Lap 45, Truex had moved his way up to third.

On Lap 47, Truex made his way around Johnson and Stenhouse to take the lead for the first time in the race.

A caution for debris on the frontstretch was displayed on Lap 53. Truex remained in the lead when the race returned to green on Lap 55, followed by Blaney and Stenhouse.

With 15 laps remaining in the first stage, Truex held a nearly one-second lead over Johnson. Elliott had made his way up to the third position.

With 10 laps to go, Elliott had made his way up to the second position behind leader Truex. Johnson had dropped back to third.

Ty Dillon had to pit for an issue just before the start of the race because his water bottle got loose inside the car, but he quickly returned to the track.

Both Michael McDowell and Cassill had to start the race from the rear of the field after both had to move to backup cars following separate incidents in Saturday’s final practice.