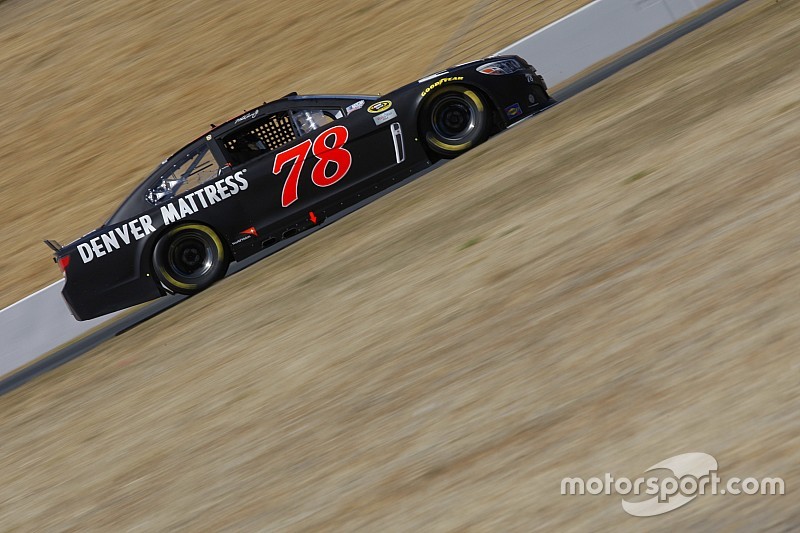 Altercation with the No. 55 Toyota sends the Martin Truex Jr. into the tires, ending his streak of top tens.

Martin Truex Jr.’s run of 14 top 10s in the first 15 races of 2015 ended on Lap 29 after contact with David Ragan sent the No. 78 Furniture Row Chevy into the tires on the esses at Sonoma Raceway on Sunday.

Truex, who is currently second in the Sprint Cup point standings, was running in the top 15 when the accident occurred.

“He just wrecked you,” spotter Clayton Hughes said over the radio. “Damn it, we’re killed.”

“Behind is stuck in the tires,” Truex replied. “Tried to get past him, he just wouldn't give me any room.”

Truex and the Cole Pearn-led Furniture Row Racing team have enjoyed a banner year leading into this weekend. Truex won two races ago at Pocono International Raceway to add to five top fives, 14 top 10s and an average finish of 7.6.

NASCAR red-flagged the race on Lap 31 for 10 minutes and 30 seconds to make repairs to the tire barrier. The wreck brought out the second caution period of the day.

Not the first impact of the race

The first was ignited after David Gilliland lost control of his car coming out of Turn 10 and also plowed into the tire barrier for a lengthy yellow period.

“That was a bad deal," Gilliland said. "I just passed Sam Hornish up in seven and went through the esses and I just told Donnie (crew chief Wingo), ‘I think I’ve got a left-front going down.  It’s soft.’  We were gonna come in and pit that lap and I eased up a little bit going through 10, but it never turned and once you get off in the dirt there that’s a bad place to get off.

"It was a big hit, but I’m OK.  I’m just bummed out for the situation.  This is a great race track.  We really love racing out here and I’ve had some great finishes here, but we’ll have to wait until next year to try again.”

NASCAR to be 'as aggressive as possible' against Confederate Flag