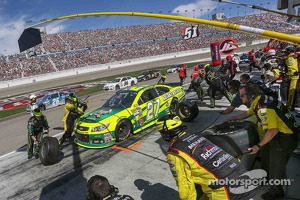 Menard was up to 12th by lap 43, 10th by lap 82 and sixth on lap 93 when they pitted under green-flag conditions. After that stop by the Slugger Labbe-led crew, their Chevrolet started to respond as Menard methodically worked his way through the top-10 and then top-five by the 175th circuit.

On lap 197, he raced six-time champion Jimmie Johnson for the lead and passed him. Relinquishing the lead on lap 205 for fuel, tires and a minor track bar adjustment, Menard returned to action in 11th place and was running second when the final caution waved on lap 221. Labbe called for a fuel-only pit stop and Menard restarted fourth on lap 225. He dropped back to the sixth after getting caught outside on the restart. Determined for more, Menard worked his way up to third when the checkered flag waved for his best-career finish at the 1.5-mile track.

Paul Menard (Start - 21st / Finish - 3 rd / Laps Led - 6 / Points - 18th): "We have had a really good car the first three races, just missed it about halfway through the race in Phoenix. This is good redemption; the guys never give up. This Quaker State/Menards Chevy was hauling ass on long runs today in Vegas. It felt good to race the 48 car (Jimmie Johnson) for the lead there and pass him. We had a lot of those long runs today and it kind of played in our favor."

Richard Childress Racing driver Ryan Newman drove the No. 31 Caterpillar Chevrolet SS to a seventh-place finish in Sunday's NASCAR Sprint Cup Series race at Las Vegas Motor Speedway. Newman started 10th and quickly raced into the top five in the opening laps. By halfway, crew chief Luke Lambert focused on tightening up the No. 31 Chevrolet for the South Bend, Ind., driver in order to break back into the top 10 by making chassis adjustments during a series of pit stops on laps 137, 156 and 208.

Then, on lap 222 under yellow-flag conditions, the CAT crew completed a gas-and-go service to enable Newman to take advantage of a great restart and race from 11th to eighth place in less than five laps. During the remaining 40 laps, the No. 31 Caterpillar Chevrolet team raced to their second top-10 finish in as many races with a seventh-place result.

Ryan Newman (Start -10th / Finish - 7th / Laps Led - 0 / Points - 9th): "It was a good comeback for our Caterpillar Chevrolet. I think that's about the race car that we had. There were times when we could be a little bit quicker toward the end of a run. It was a good effort for the team and it was a good points day. If we keep running like that, we'll put it in the top 5 and if we do that, we'll win. I'm just proud of the guys and everybody from Caterpillar and Chevrolet and RCR. Everybody did a good job. It's nice to be able to put on a show here in Vegas for CAT, they had more than 700 people here in attendance. I hope they had a good time;"

Richard Childress Racing driver Austin Dillon drove the No. 3 Cheerios Chevrolet to a 16th-place finish at Las Vegas Motor Speedway on Sunday afternoon. The Welcome, N.C., driver started the 267-lap event from the fourth position and maintained a spot in the top-10 for the first 90 laps before pitting for four tires and fuel on lap 94 under green-flag conditions.

Exiting pit road in the 11th position, Dillon developed a tight-handling condition during the middle portion of the race and fell further in the running order. A series of pit stops by the RCR crew helped alleviate the handling conditions the young driver was facing, but track position was key and Dillon ultimately recorded a 16th-place finish.

Austin Dillon (Start - 4th / Finish - 16th / Laps Led - 0 / Points - 13th ): "We just got too tight during the middle portion of the race and lost some track position. I am proud of the Cheerios racing team. They did a good job today and I learned a lot. We are building a good notebook that will be helpful next time we come here."