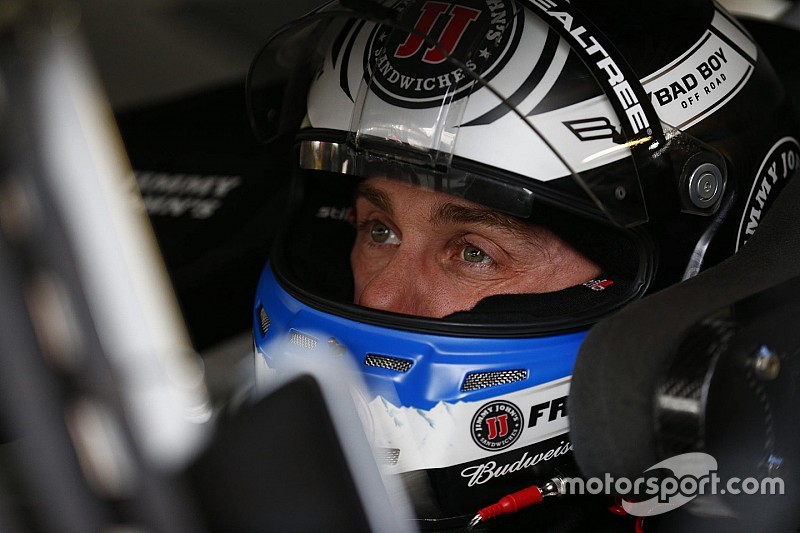 It wasn’t one big “Happy” family for Stewart-Haas Racing following the Hellmann’s 500 at Talladega Superspeedway on Sunday.

Although both Kevin Harvick and Kurt Busch transferred to the Round of 8, apparently Harvick didn’t appreciate the way Busch raced him in the closing laps. Harvick, who was locked into the Round of 8 in the Chase, was told before the closing stages that Busch was “good” in the standings and he could race for the win — and the teammates did.

Following the race, Kevin Harvick approached the No. 41 Chevy of Kurt Busch and had words for his SHR teammate.

“Yeah, the final laps everybody is just pushing and shoving and then he (Kurt Busch) cleaned the side of our car out after the checkered flag,” Harvick said. “I don’t really understand that, but all-in-all the Jimmy John’s Chevrolet team did a great job and didn’t have a scratch on it until then. That is pretty good for Talladega.”

Harvick didn’t feel Busch’s response was sufficient. Busch, who entered the race fifth in the standings with a 20-point deficit, was attempting to gain as many positions as possible at the end.

“We were battling hard and had a great run,” said Busch, who finished fourth. “Our car just wanted to go to the front today. There were a few times I made a mistake and got shuffled back about 15th or so.

“We just worked our way back up and had good pit stops. This effort today just felt like that total team effort. The pressure is here, but we are going to get stronger and better as this Chase goes on.”

But clearly, Busch and Harvick were not on the same page following the race.

“He has a misunderstanding of the call at the end of the race,” Busch said. “He will understand it and I’m sure he will clear it up in his interview.

“For us, we are great teammates. We are doing good together. We have to work together to beat all these other teams out there and he knows that.”

Hamlin advances into the Round of 8 via tiebreaker