Does the renewal of NAPA and Martin Truex Jr. give Michael Waltrip Racing confidence leading into the Chase? "Obviously, our cars are performing well. Our commitment to partner with Toyota and work closely with Joe Gibbs Racing as well has elevated our game. I think the key thing about today is Martin's (Truex, Jr.) attitude toward getting it done. 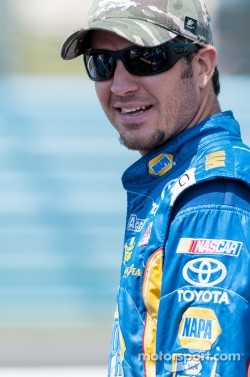 He came to Rob (Kaufmann, team co-owner) in April and said, 'I want to drive this car next year. Y'all figure it out. I'm your guy.' That's the kind of guy you want driving your race car. NAPA saying, 'We're in. We want to go forward.' It just allows us to focus on what we have to do.

I love what Martin said, he's fast enough, our cars are good enough -- we've had to be conservative over the last few weeks to get into this Chase -- we're not going to be that way when the Chase starts. Tony (Stewart) proved last year that you can make some special things happen in that 10-week run. I'm very optimistic about who we are.

This news is just confidence. I know Martin when he puts on that NAPA uniform today is going to feel better than he ever has about who he is and where we're going. We're just really happy to have this commitment. Think about where we've come from -- you can imagine. I don't really need to explain it to you."

What is it about Michael Waltrip Racing that made you want to renew your contract? "I think the biggest thing is that Michael (Waltrip, team owner) and the guys have given me a great opportunity here to be part of a team. I don't go home on Sunday night and sit there and wait for them to build my race cars better or bring me better stuff on Thursday -- I go to the shop on Monday and I'm part of a team and part of building that process.

With those guys integrating me into the team and giving me some say and making me feel like I'm part of something has probably been one of the coolest and proudest moments of my life. It's been a lot of fun and I just want to keep it going. My biggest fear this year was this deal falling apart and us not being able to realize our potential. I feel like we're not where we can get to yet and I'm very, very happy that we'll be able to continue down that path."

How close are you to winning races and potentially the championship? "We're right there. We've been close -- we've been capable of winning races all year long, we just haven't finished the deal. We've run second a bunch of times and we've had the car to beat two or three races and we didn't do everything right. It takes a lot of things to go your way to win a race.

On the days where we've had the fastest car out there, we didn't have the cautions go our way or maybe pit strategy or the way the cycles went, but we've had the speed and we've got the team that's capable of doing it for sure. For now, it's just a matter of getting that first one out of the way and quit worrying about it and go after a bunch of them.

Maybe this will help -- it will be great for the guys on the team to not have to worry about where their job is going to be next year and we're very excited about that and are looking forward to what we can do together. This has been a good race track for us and we feel like this is a place where we can come here and win and there would be no better place to win than here in NAPA's backyard."

Do you expect the Richmond race to be wild? "Richmond obviously has the ability to be one crazy, wild, exciting race. It's been that way in the past and depending on who is in and out of the wild card spots things are definitely going to get exciting, so we'll just have to wait and see. Hopefully, we'll be locked in by then and we can just go after a win."

Would you like the last race before the Chase to be on a 1.5-mile track? "Probably not. I think Richmond is definitely a good place to settle things -- some good 'ole short track racing -- and it will definitely get more exciting there than it would be anywhere else."

What has allowed you to be successful this season? "For me, it's just been being part of a team and really helping build my team as a unit. Being a part of Michael Waltrip Racing with our other drivers, with our engineers, all the staff there -- being a part of that process of making our cars better, being smarter each week on the race track and, ultimately, getting better results on the weekend and being able to be proud of that."

Do you feel like you're a better driver this season? "Well, I certainly feel like I'm better than I've ever been. Obviously, as a driver I don't think you ever stop learning and we continue to get better year in and year out, but I feel like the past couple of years being a struggle the way they've been has really helped me stay motivated, stay focused and really be able to reach our goals this year because of that."

Danica Patrick feels like she was sideways in practice at Atlanta