What NASCAR didn't like about Joey Logano's rear suspension 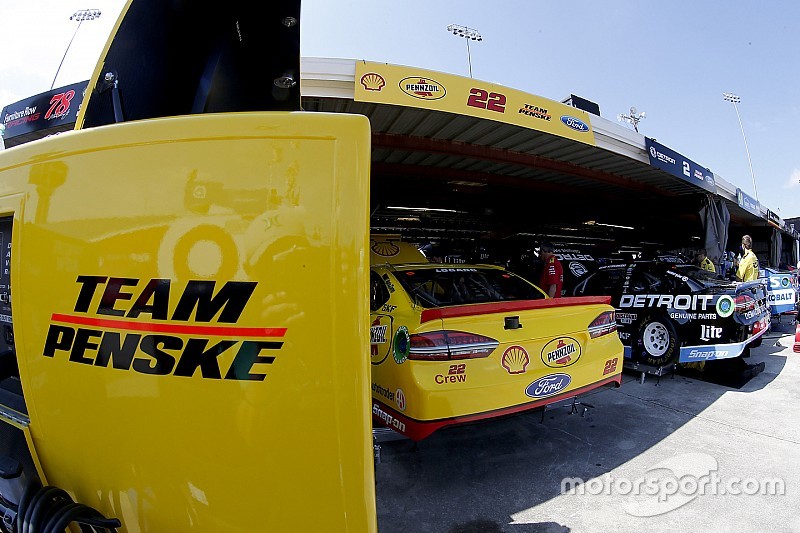 Gordon was fined $50,000 and suspended for two races. He will sit out at Talladega Superspeedway and for next weekend’s race at Kansas Speedway. The team also lost 25 driver and owner points for the infraction.

The crew chief appeared on SiriusXM NASCAR Radio on Friday morning and worked to squash any untoward speculation regarding the penalty.

“I’ll start with a short synopsis of what our rear suspension is made up of,” Gordon said. “Our rear suspension has two trailing arm. We call them truck arms because it’s much like out of a mid-60s Chevrolet truck. There’s two 51-inch long trailing arms and two I-beams that come back and bolt to the rear housing. Then there’s a bar we call the track bar that bolts from the chassis on the right to the left-side truck arm. That’s kind of the make-up of the rear suspension that our cars have.

“In order to set the pinion angle — and that’s part of what the ruling was, the pinion mating surfaces — there are pads on the rear end housing that are part of the bolting mechanism. There’s a U-bolt going down over the housing to bolt it together. Where that pad is and the truck arm is, we can put an angled shim in there to change where the drive shaft angle is coming to the rear end. We call that pinion angle.

“What NASCAR found is, the pinion shims and the mating surfaces have to be full contact at all the time. That’s what we violated. On the right-side truck arm at the back of the pinion shim, there was a 32nd of an inch gap. And the rule says it has to be in contact the whole time. It’s unfortunate, it’s not something I thought we’d have an issue with it but it’s part of the system we’ve got.”

NASCAR rewrote some of the truck arm and shim rules in the off-season. Although there’s been debate as to whether or not NASCAR should have discovered the gap prior to inspection at the R&D Center this week, Gordon says there was no gap between the shim prior to the race. And with 32nd of an inch difference, he says there’s really no tolerance where the rule is concerned.

“There’s really not a whole lot of tom foolery that goes on to hide something like this,” Gordon said. “We don’t work that way at Team Penske, try to stay on the up-and-up and push things where we can. Pre-race, there was no gap there. If you look at it, the suspension has to move. That joint — where the U-bolt goes over the housing and clamps the housing to the truck arm — that joint is the only thing that reacts to the drive of the rear tires.

“Between the left and the right in race situations, there’s 2,500-pounds worth of torque that’s applied through there. So there’s a lot of load on that joint…those pieces move. In order for the suspension to move, parts have to bend. Through 400 laps at Richmond, pit stops, pit launches and restarts, things move. It was legal when it rolled across the NASCAR inspection platform to start with and I would say just race loads and everything else it became low enough that the back of the pinion gap opened up 32nds of an inch.”

Gordon accepts full responsibility for the penalty. He said the team will review the inspection process to better understand where the violation stemmed from. On Thursday, Team Penske released a statement acknowledging they won’t appeal the penalty.

“We won’t appeal it,” Gordon said. “We understand what the penalty was — and not something that we intended to have down there or to have issues. I never want to be in the back races at post-race inspection. But unfortunately, that was the situation.”

Logano believes Penske "the most professional organization out here"