Who will be NASCAR's next generation of team owners? 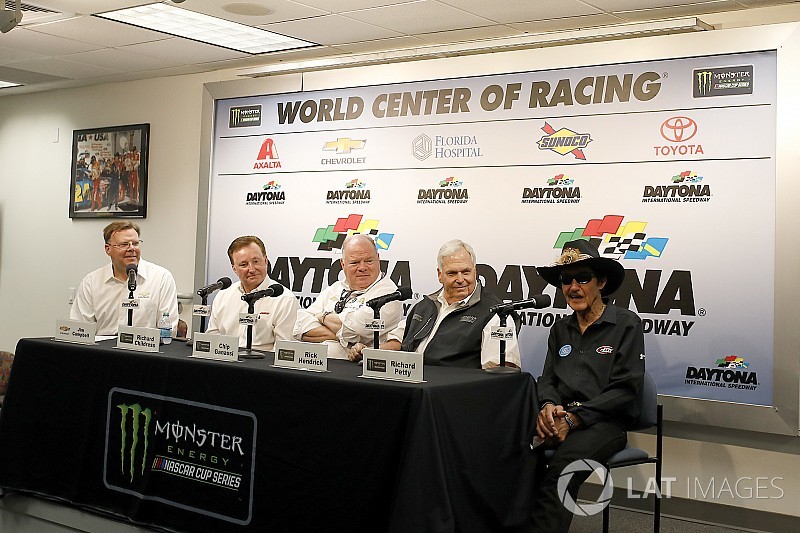 There’s always a next generation of NASCAR drivers to fill the void as older competitors age out.

But where will the next line of team owners come from? They represent the foundation of the sport.

Roger Penske, who turned 81 on Tuesday, remains passionate about racing and is still a fixture at most of the IndyCar and NASCAR tracks and a handful of Australian Supercars events where his teams won titles in all three series last year. And in 2018, they've returned to IMSA to compete in the WeatherTech SportsCar championship.

Barney Visser, 69, is not a newcomer to NASCAR garage. After a decade of dedication to the sport, the furniture maker from Denver, Colorado proved an outsider could win the Monster Energy Cup Series title.

Richard Petty, 80, has a renewed sense of hope with 24-year-old Darrell “Bubba” Wallace Jr., behind the wheel. Wallace’s second-place finish in the Daytona 500 was the best for the venerable No. 43 car since Petty won in 1981. But after seven decades of caravanning to the race track, the King can’t imagine being anywhere else.

“You know, I've been going to the races since I was 11 years old,” Petty said. “Drove the racecar, it was a hobby. Now basically it's a hobby. Trying to make a living out of it, too. It's in your blood. I wouldn't know what to do if I didn't do the racing part.

“I guess when my toes turn up, I'll still be at the racetrack somewhere.”

Petty isn’t concerned about which family member steps up to the plate when he’s no longer up for the task. There are plenty to fill the void.

“I got about 25 people with the name Petty on the end of it,” said the seven-time champion. "They'll be here for a while.”

Hendrick Motorsports is in good hands

Rick Hendrick, 68, has enjoyed more success in NASCAR than any other team owner with 16 drivers championships, 296 race wins and 245 pole positions. While he balances his automotive empire between his showrooms and his race teams, he’s had a lifelong love affair with racing from speed boats to stock cars.

“My body tells me I can’t keep up with the pace I used to have but I have some great people and I help direct them,” Hendrick said. “Roger Penske and I are buddies. We talk. He’s about 10 years old than I am. But it’s what we love. It’s something energizes us. Richard said it best. ‘What would he do?’ He walks out here and there’s fans all over him just like there were 25 years ago.

“It’s our brand in the automobile business. I go to visit stores and they bring their kids if they know that I’m in town that are race fans. For me, like Richard, I grew up wanting to race—drag race, race on the street. I never thought I could do this. I showed up here and have been surrounded by great people and been very fortunate.”

“I think our deal is in good shape for the future,” Hendrick adds. “There’s enough energy and family in the sport that want to carry these things on. Will there be an influx of a bunch of new owners? It takes a lot of money to start a team.

How charters have changed things

Hendrick believes the introduction of the NASCAR charter system two years ago will enable the current fraternity of owners to keep skin in the game. That’s what Rick Ware Racing is banking on.

Since entering NASCAR in 1995 as a driver then getting hurt and coming back a decade later to concentrate on the team ownership side of the business, Ware, 54, and his wife Lisa have poured themselves into the sport. The family has also raced IMSA and Supercross before attempting to compete full-time in the Monster Energy Cup Series.

“It’s a very unique business,” Ware said. “This year, we will make our 750th start as an owner. We’ve done multiple trucks, Xfinity, Cup, part-time-Cup. You have to be really immersed. You can’t be a passive owner. First of all, you have to be here for the core love of the business. If it’s just about the money, it’s probably too much work to justify it. I don’t know how you can be a good surgeon just for the money. You can’t justify spending 12-16 years of your life to train for it.

“You have to love it. You have to be willing to work hard. It’s a tough deal when you think about it. There’s probably only 20-25 owners. Period. It’s tough. It’s a tough question to answer because I don’t know where the next generation will come from.”

This season, Rick Ware Racing bit the bullet and leased the No. 43 charter from Richard Petty Motorsports in hopes of finally establishing a foothold in NASCAR’s top tour. For now, the No. 51 team is on the high rent end of the garage but experience tells them they could easily be bumped to the back again.

“Why is there not a niche for what we do,” asks Lisa Ware. “You know, somewhere in between the money that Hendrick gets and what we want to do. There has to be a marketing plan for that.”

“It takes a want to want to work that hard,” Rick Ware adds. “We’ve been involved in different forms of motorsports but NASCAR is the only one that has a business model that works. The others are for wealthy people with serious hobbies.

“You have wealthy owners that are here that have other businesses to support their racing. At some point, there’s always the fine line between business and performance. If you chase performance, you’re almost always going to sacrifice the business model and you’re not going to make a living. These other owners that do things to make money, they realize there’s a fine line between the business side and the profit side. And we have to walk that line very carefully.”

RWR provided rides for seven different Cup drivers last year. They’ve started 2018 with two different drivers and will offer Cole Custer the opportunity to make his Cup debut at Las Vegas Motor Speedway next weekend. The Wares have tailored their program to supply drivers with options to suit their needs.

Richard Childress Racing is another company that has a unique business plan supplemented with technical alliances and rides for qualified drivers with sponsorship. After a reorganization over the last year, the organization came to Speedweeks and won the 2018 Daytona 500. At 72, Childress is still going strong, but could he see a day when he turns over the reins to his Daughter Tina Childress Dillon?

“She can run it better than me,” Childress said. “She runs our winery, some of our other businesses. She's our consultant. Believe me, I hear about it every Monday morning, sometimes Sunday night.”

A look towards the future

Certainly, the ownership ranks is missing its fare share of females in ownership roles. With Dillon’s background of raising two sons in racing and watching her father run a successful operation for nearly five decades, she knows the sport inside and out.

Earnhardt-Miller would be more than capable of taking JRM to the Cup level should Hendrick ever divest himself of the company. But Hendrick doesn’t show any signs of taking a backseat anytime soon.

“I see some of the smartest people I know, Warren Buffett, Roger Penske, that are in their 80s and outworking, outthinking and outrunning everybody,” Hendrick said. “It’s the adrenaline rush and the energy boost that you get from loving what you do.

“Now, if you hate your job and you’re 65, then it’s time to go. But if you love your job and it makes you want to get up in the morning and go to work, then you’re very fortunate.”

Eye in the Sky: How Austin Dillon's spotter helped him win the 500