Whose fault was Chicago clash: Kevin Harvick or Jimmie Johnson? 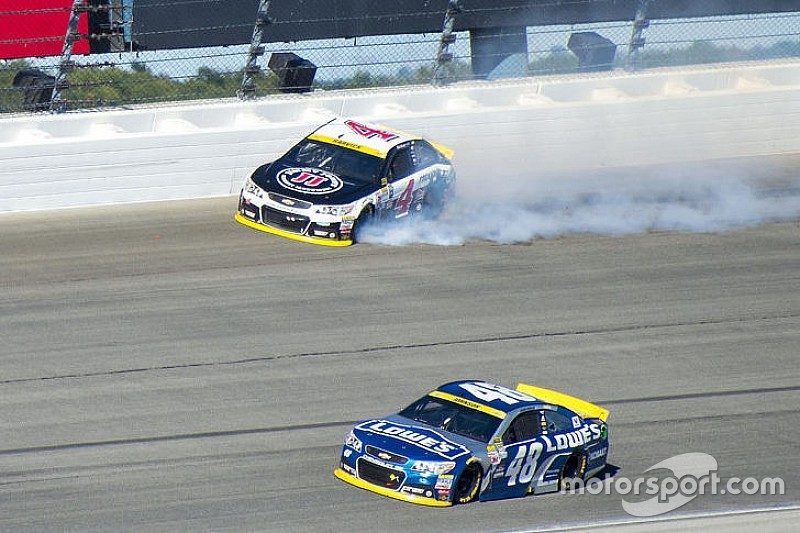 It took 135 laps of Chicagoland for NASCAR’s Chase to truly ignite as Kevin Harvick and Jimmie Johnson banged fenders, giving Harvick a tire rub that later sent him into the wall. Whose fault was it?

Motorsport.com’s Editor in Chief Charles Bradley and NASCAR Editor Jim Utter beg to differ over who was at fault for their collision following a restart. Watch the replay, read their opinions and then decide for yourself who you agree with...

It was Harvick’s fault

Charles Bradley: What was Harvick thinking? We were only just past half distance in race one of the Chase, not a green/white/checker at Homestead with the title on the line. Sure, he’s entitled to hold his ground at a restart but he should also give rivals some racing room, and his attempt to hold Johnson down on the apron – who clearly had a huge run going into Turn 1 – was misguided in my mind.

More importantly, it’s what was going through his mind that matters. Harvick, like all topliners, has a finely-tuned racing brain. Through all his years of racing experience, he will have learned to switch off his conscious mind, and focus purely on his subconscious. Which is perfectly fine for 99.9% of the time.

This part of the brain reacts much faster – many refer to it as being ‘in the zone’ – and while this is great for laptime it’s rubbish at assessing risk factors. In here, there is no peril assessment, little fear beyond primitive instincts (loud noises making you jump, your nose twitching when you smell burning, etc) and zero ‘big picture’ thinking space. That’s what the logical and rational half of the brain does.

And this is where Harvick’s mind management faltered, as so many drivers do at crucial times. Ironically, it’s often listening too much to the conscious brain – which is constantly self-critical, and brings incessant background noise – that causes drivers to ‘choke’ or lose out in the heat of battle.

But what Harvick did was the opposite: he didn’t  listen to the voice in his head that would have been screaming at him to play it safe, he stayed purely in that clear air of the subconscious which meant there was no way he was going to give an inch to a rival, never mind a car width to a rival with a run on him.

Johnson was running out of road and time to get back off the apron and on to the racetrack before Turn 1. He was pushed there in the first place by Joey Logano, and actually I think Johnson did well not to push Harvick into a spin – having backed off massively when he realized this might happen – which would’ve led to absolute chaos.

My final submission is this: watch the onboard from Logano, and look how much space Harvick has available to his right…

It was Johnson’s fault

Jim Utter: What was Johnson thinking? Sure, Joey Logano shoved Johnson on a restart on Lap 135 of 267 in Sunday’s Chase for the Sprint Cup opener at Chicagoland Speedway, but so what? Logano didn’t turn Johnson’s steering wheel to dive down on the apron.

No, there is nothing illegal about driving on the apron at Chicagoland, but should a driver elect to go there, he better have a plan for getting off it before entering the turn.

What was Johnson’s plan? Simply move up the track and hope Harvick moves over. That’s not a plan, it’s a fantasy.

Yes, this was the first half of the first race of the Chase, but four drivers are eliminated after the first three races and winning one automatically advances you to the next round, providing an enormous benefit to your team.

We’re not talking about Lap 10 of 200 in the season-opening Daytona 500. There is a championship on the line and if I’m a fan, I’m not looking for my favorite driver to simply move out of the way to help someone else get out of jam that they created.

Yes, you do, but not by expecting others to help you out of your problem.

Charles asks, “What was Harvick thinking?” Perhaps he was asking himself why he should he allow a potential race-winning and championship-winning driver to get by and deny himself the victory?

Some might call that selfish. I bet plenty of other drivers with championships on their mantel – including Johnson – would call that smart.

After all, you can’t race in the championship finale at Homestead unless you get there and you aren’t going to get there by helping your competition finish better than you do.

Did Harvick pay a price for holding his line? You bet he did.

But how would he feel if he had let Johnson by and Johnson then went on to win the race. Any better? Really?

Yes, the onboard video from Logano is very enlightening. It shows a wealth of race track Johnson could have headed toward rather than the apron – the one place he knew he couldn’t remain for very long.