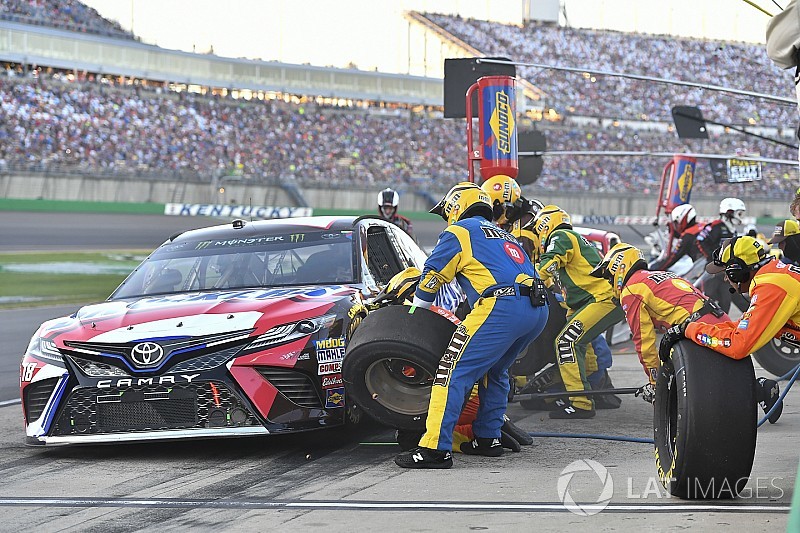 On the final green-flag pit stop in Thursday night’s race, Rhodes pit for fuel only on Lap 123 of 150. Most of the leaders took two or four new tires.

When the cycle of stops had completed, not only did Rhodes come out ahead of former race leader Stewart Friesen – who took two new tires – but Rhodes was able to hold him off the remainder of the race and claim the win.

All three series have a new left-side tire this weekend for Kentucky, which Goodyear brought in an effort to increase mechanical grip.

“We’re running on hockey pucks, so, you know, they’re harder than hard and you can stay out on tires and whoever is out front, air matters more than the rubber that meets the road,” Busch said Friday at Kentucky.

“So, you know, it’s challenging racing when you have that especially in a Truck race. The guy that had two tires wasn’t able to come through (the field) and even our cars, our trucks when we were trying to pass people towards the end of the race, we got boxed in as well, too.

“So, I think you’ll see the same thing Xfinity and Cup.”

Rhodes’ crew chief in the Truck Series, Eddie Troconis, said his decision to make the no-tire call late in Thursday night’s race was based on what he had seen from the tire wear earlier in the day in practice.

ThorSport Racing teammates Matt Crafton and Rhodes did a run in practice where Crafton took right-side tires and Rhodes took four tires to see how they compared.

Once the race got underway, Troconis said they discovered that Rhodes’ balance wasn’t as good on a two-tire change.

“Our truck was fast and I felt we were strong on four tires. On the last run, we had four tires and Ben said he was still pretty tight,” Troconis said. “With fuel, no tires we would definitely get the lead. But on two right-sides we were going to get tighter.

“With the time it would take to do two right-sides, I could made some wedge and track bar adjustments. That was actually the game-changer.”