The Wood Brothers and the Motorcraft/Quick Lane crew didn’t get to drive their No. 21 Ford Fusion to Victory Lane at Michigan International Speedway on Sunday, but they did feel like a big celebration was in order.

Over the years, the Wood Brothers have played a large role in Ford’s NASCAR success, winning 98 races in both Fords and Mercurys, including some of the sport’s marquee events. Among the Woods’ victories are five in the Daytona 500 and 11 at Michigan International Speedway, where their win total is second only to Sunday’s winning team, Roush Fenway Racing, which now has 13 at the home track of the U.S. auto makers. 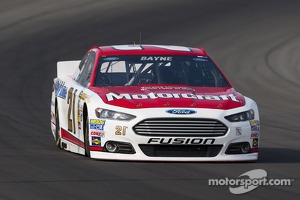 “We’re proud to be a part of Ford’s celebration of 1,000 NASCAR victories,” said Eddie Wood, co-owner of the No. 21 Motorcraft/Quick Lane Ford Fusion. “We want to congratulate Ford Motor Company, Jack Roush and Greg Biffle for getting this milestone win and for getting it here at Michigan. It caps off a great week here.”

Wood, his brother Len and their driver Trevor Bayne took time this past week to visit their Ford friends in Dearborn and on Sunday, Edsel B. Ford II, the great-grandson of company founder Henry Ford, and his son Albert watched the Quicken Loans 400 from atop the Wood Brothers’ pit box.

“That’s truly an honor for us,” Eddie Wood said, adding that Mr. Ford is a huge supporter of racing.

On the track, Bayne was involved in a minor dust-up on the start, but quickly moved inside the top 15 from his 25th starting spot. A later incident caused some aerodynamic damage to the Motorcraft/Quick Lane Ford Fusion, but quick pit work by the Motorcraft crew and good race strategy by crew chief Donnie Wingo helped Bayne bring the No. 21 Ford Fusion home for a top-15 finish.

“Considering the damage to the car, we were fortunate to wind up 15th,” Eddie Wood said.

Bayne and the Motorcraft/Quick Lane crew return to the Sprint Cup Series next month for the Coke Zero 400 at Daytona International Speedway on July 6.