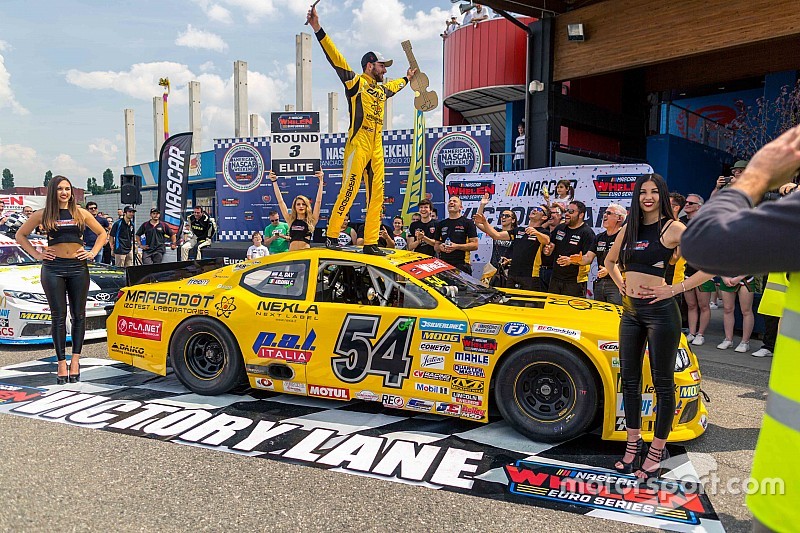 Day held off Marc Goossens on two restarts throughout the 29-lap event to pick up his first win of the 2019 season. Canadian Jacques Villeneuve followed in third to score his first podium finish in the NASCAR-sanctioned series in just his third start.

The Israeli native was ecstatic after winning the race.

“It’s such a wonderful feeling to win again,” said Day, who used his win to move into the lead in the championship points standings. “It was tough for me and the team in Valencia. It wasn’t easy as Marc was there the whole time.

“I saw him and Jacques in my mirrors all the time. It was an honour to stand on the podium with a Formula One champion. We want to build on this win today and do it again tomorrow.”

After scoring his third-place finish,  Villeneuve will start fourth in the Sunday ELITE 1 race.

“It was a physical race on that short track and it was fun,” said the Go Fas Racing driver. “The fastest lap is important for the grid for the second race. Unfortunately we were faster in the end of the race when the tires weren’t fresh anymore. I was trying to get closer to Marc in case he made a mistake.”

The first caution flag of the race was given on Lap 1 after Mauro Trione and Alex Claffi got together in Turn 2 sending Trione flipping into the safety area. Both drivers were okay after the incident.

“I had a good start and gained some positions,” said Trione. “Alex Caffi was hit hard in the back and then he spun. I was not able to avoid him and then I got pushed from behind. I rolled in a very soft way, so the car is not damaged that bad.”

Nicolo Rocca was sixth with Gianmarco Ercoli seventh while Stienes Longin - who finished second in both Elite 1 races last month in Spain - was eighth with Francesco Sini and Alex Sedgwick completing the top 10.

Ander Vilarino, who swept the season-opening weekend last month in Spain, also made contact with another driver suffering damage to his car, forcing him to eventually retire on Lap 24.

“I was hit by a competitor on my left rear and suffered some damage,” explained Vilarino, who lost the championship lead to Day. “I got my starting position back during the caution. I was able to gain some spots, but unfortunately the car was unable to continue and I had to retire before the end of the race.”

Rookie drivers ruled the podium at the finish of the Elite 2 division race after Lasse Sorensen was able to take advantage of bad luck for a pair of drivers to score the win in his debut start.

“That’s amazing and thanks to the whole team,” said Sorensen. “They gave me a car that was amazing. As they say to finish first you have to finish and I had a bit of luck with Florian (Venturi) retiring early.”

The Danish driver was making reference to Venturi, who won a race last month in Spain, and Andre Castro who both experienced issues that cost them both a chance to win the race.

Justin Kunz, a teammate of Sorensen, was fourth with Advait Deodhar completing the top five.