The Spaniard scores back-to-back wins in the Whelen Euro Series opening weekend to take early lead in the championship standings. 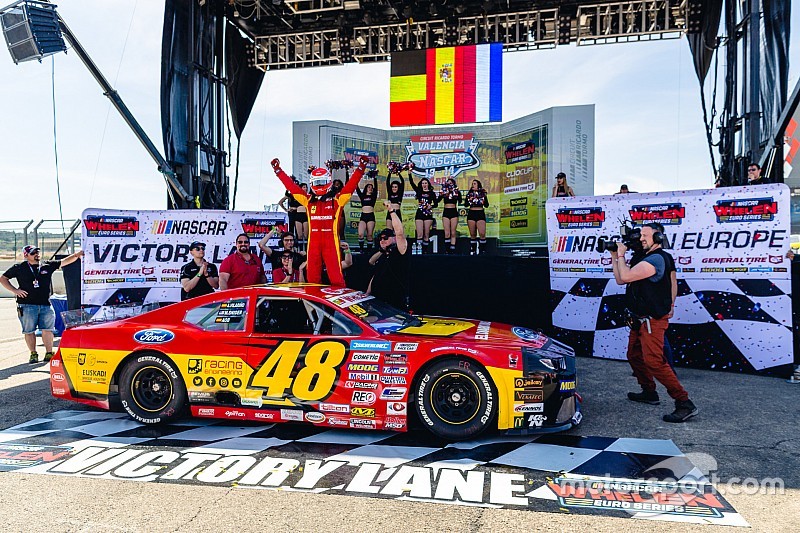 What a way to comeback to the NASCAR Whelen Euro Series after a four-year absence for Ander Vilarino.

For the second consecutive day Vilarino led all 18 laps of the race to pick up his 22nd Whelen Euro Series win and exit his home country with the series points lead.

The Donostia, Spain led all 18 laps of the race just like he did on Saturday and was able to keep Stienes Longin in second as well for the second straight day at the Circuit Ricardo Tormo. The two are now first and second in the championship standings, separated by 10 points.

The win was the sixth for Vilarino at his home track on the Whelen Euro Series schedule.

“We just had a fantastic car, I have to congratulate Racing Engineering for this,” said the winningest driver in the Whelen Euro Series. “It was the team’s first race ever in this series and they did a great job. I was not expecting to win a single race here in front of my home crowd, but honestly the car was perfect. Thanks to the fans, Euro NASCAR and all the persons involved for making it such a great weekend.”

Longin was able to stay close to Vilarino and despite not scoring a win was happy with how his weekend turned out.

“It was a really great weekend for us,” said Longin, who will chase Vilarino for the championship lead at the Autodromo di Franciacorta in Italy next month. “The team was outstanding in building the car and finding such a good setup. I think I had a shot to win the second race here. In the end it’s good to score a lot of points at the first weekend of the season. I tried to push a little bit harder to get Ander, but he was just a little bit quicker.”

The start of the race saw a big crash on the mainstraight. Ellen Lohr and Maurio Trione made contact and slammed hard into the wall. Both drivers walked away and had a friendly chat right after the checkered flag waved.

Nicholas Risitano held off Andre Castro to become the second consecutive driver to score their first NASCAR win of the weekend in the Elite 2 division.

The 31-year-old Italian took advantage of the intense battle for the lead ahead of him between Myatt Snider and Castro to position himself perfectly and grabbed the lead on Lap 8 of the 15-lap race and staying out front the rest of the way.

“It was an amazing race and I’m happy to celebrate my my first ever NWES win here at Valencia,” said Risitano. “Yesterday we broke an engine but the team was able to send me on track for two laps in the first race to get a good position for today's race. Racers Motorsport simply did a fantastic job, they worked all day and night to win this race. I’m really looking forward to the races at Italy in May.”