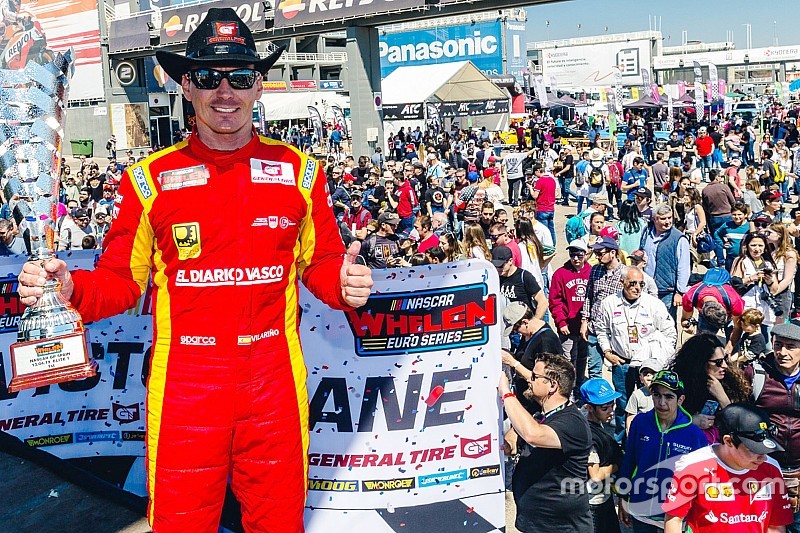 The native of Donostia, Spain, held off a spirited challenge from Stienes Longin and defending series champion Alon Day to pick up his record-setting 21st series win in his team’s inaugural NASCAR series start.

The Spaniard started from pole position in the 18-lap event held the lead from the start of the race. Longin was able to pass Day early, moving from fourth to second. The three drivers put up a tough three-way battle for the lead that lasted most of the 72-kilometer race.

“It’s been a fantastic race,” said Vilarino, who led from flag to flag. “Thanks to the Racing Engineering team for giving me such a great car. In the beginning we were faster than everybody else, but then Stienes and Alon came back to my rear bumper.

“Stienes was much faster than me until his pace dropped off. I am really happy to win in front of my home crowd and for the fifth time here in Valencia.”

Longin was also happy for the second-place run.

“I started fourth and suddenly after Turn 1 I was second,” said Longin. “I was too nice to Day. I know he is a good overtaker and that is why he passed me again. He began to struggle so I was able to catch him again and also close the gap to Ander. In the end (Vilarino) was too fast for me.”

For the defending series champion, he felt his car was just not quite fast enough to contend for the win.

“The team did a really great job,” said Day. “Unfortunately we couldn’t push enough to catch Vilarino. He was very quick and had the advantage of the pole position. I wasn’t involved too much in the fight between Stienes and Vilarino so I was able to save the tires a little bit, so we’ll see tomorrow.

“Understanding the new tires this year will be an important part of the championship, so I’m ready to strike back tomorrow.”

Lucas Lasserre was fourth and Nicolo Rocca was fifth and won the Junior Trophy in his NWES comeback.

The NASCAR Whelen Euro Series ELITE 1 will be back at action on Sunday at the famous Circuit Ricardo Tormo. The race will start at 1:55 pm CEST. All races will be streamed live at Motorsport.tv, Fanschoice.tv, the Euro NASCAR Youtube channel and Facebook page, Motorvision.tv.

After leader Andre Castro and Gander Outdoors Truck Series driver Myatt Snider got together on the final lap racing for the lead, Giorgio Maggi benefited with the victory in the Elite 2 division race.

The pair of first-year American drivers fought for the lead after battling up front the entire race when Snider made his move in the final turn of the race to score a win in his first series start.

The contact sent both drivers spinning and opening the door for Maggi to move up from third and score the win.

“I’m really happy to win here in my Euro NASCAR debut in Valencia,” said the 21-year-old race driver, who also won the Rookie Trophy. “I tried everything to catch those two guys in front of me, but in the end my goal was to save a little bit of tires.

“I managed to avoid crashing into them and got the win. Many thanks to Hendriks Motorsport for giving me such a great race car.”

Vittorio Ghirelli started 12th and came home second ahead of Martin Doubek who finished third to give another podium finish to Hendriks Motorsport. Massimiliano Lanza was fourth with India native Advait Deodhar rounded out the top five.