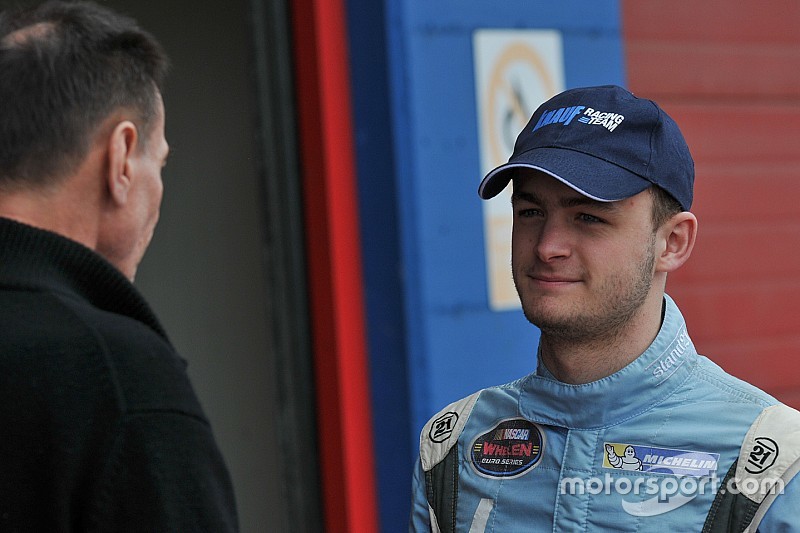 This week Motorsport.com continues its series of stories to help NASCAR Whelen Euro Series fans get to know the drivers and stars of the only NASCAR sanctioned series outside of North America.

The ‘Getting to know’ feature highlights drivers in both the Elite 1 and Elite 2 divisions. This week driver Thomas Ferrando is featured.

Ferrando is one of the first young drivers to go straight from karting to NWES and fully demonstrates how smooth the transition can be for a competitor. He’s been a part of the NASCAR Whelen Euro Series driver’s development program since the beginning, training in a NWES car and he’s also raced in the US when he was too young to compete in Europe.

Ferrando has quickly become one of the most popular drivers with the fans and can easily communicate throughout Europe as he’s fluent in French, English and Italian.

Ferrando didn’t come from a wealthy family, however his skill and talent caught the attention of Knauf and the company decided to invested on him and founded the Knauf Racing Team. They now have two cars, one for Ferrando in ELITE 1 and ELITE 2 and another car is fielded for drivers Wilfried Boucenna and Paul Guiod.

1. How long have you been racing and what was the first race you competed in and what kind of car did you drive?

I’ve been racing for 12 years and I started driving for six years in Karting, then two years of training in a stock car (NWES cars in Europe and different stock cars in the US) and another four years of racing. The first race I competed in was at the “Madhouse”, Bowman Gray Stadium in Winston Salem and it was in the NASCAR Whelen All-American Series Modified division. It was an incredible feeling and an unforgettable moment.

2. How long have you been competing in the NASCAR Whelen Euro Series?

I’ve been in the NASCAR Whelen Euro Series for four years now. My first year was with the No. #22 team and from my second year to now I’m working with the KNAUF Racing Team driving the No. #37 car in both ELITE1 and ELITE 2 divisions.

3. What made you decide to compete in the NWES?

I’ve tested a NASCAR car when I was 12 years old and I really fell in love with this car. It was fantastic for me and there is a funny story behind it. My current team manager Olivier Bacle and NWES President Jerome Galpin played a big role in this first test. Olivier is a dear friend of my parents, he has known Jerome for a long time and he loves racing. He was the one who suggested to my family to put me in a Go Kart. When I was 12, he suggested I try a NWES car and with Jerome they organized a private test at Val de Vienne. Olivier was my instructor in the passenger seat and I also took laps with Wilfried Boucenna. I wasn’t strong enough to change gears, so they had to help me with the gear lever, but after 20 minutes I was hitting 200 Kh/h on the straight. After that I’ve done some races in America, I’ve served as spotter for Wilfried Boucenna and then I was selected for the NWES Drivers Development Program in Europe, and it was natural to start racing in NASCAR Whelen Euro Series.

4. What makes being a part of the NWES special to you?

5. How have your fans responded to you being a part of NASCAR in Europe?

They are all enthusiastic about it. They push me to be better every day, and I’m trying to give them back. I’m working hard for them and maybe one day bring them with me on top of NASCAR in the US.

6. What or where is your favorite track on the schedule?

My favorite track and event on the European schedule is Brands Hatch. The American SpeedFest is one of the most impressive events of the year. The fans are amazing and we can feel their energy all weekend long. The track is also really enjoyable, I really love to go there.

7. Do you have any hobbies outside of racing?

I like practicing every kind of sport. But my two main hobbies are cinema and video games. I enjoy playing video games with my brother or watching films with my family. My favorite movies are from the Fast & Furious franchise. I like especially Too Fast Too Furious and the first Fast and Furious because of the atmosphere and the energy. I loved how they work on the cars to change them. It will be super cool to see what the Brands Hatch organizers have prepared this year to celebrate Fast & Furious during the American SpeedFest V. As far as video games, I loved Need For Speed and I liked Project Cars too. I also tried iRacing and it is a fantastic simulator. I started with a Legend car and moved up, obviously to stock cars!

8. If you weren't a race car driver, what do you think you would do instead of racing for a career?

It’s hard to imagine my life without racing. I think that driving and the passion for cars are linked, and all jobs I could imagine to do are linked to racing. Maybe being an aerospace engineer could be a great choice and that’s what I’m preparing for at school in France. But I feel more alive when I’m on the track and it is what I really want to do.

9. Who has been the biggest influence in your life and/or racing career?

Who has been the biggest influence in my life and in my career? That’s a tough question. Ayrton Senna, Jules Bianchi, Jeff Gordon and Dale Earnhardt, they all four had an impact on my life and my career. They are amazing drivers, their behavior have impact me and that is the type of driver and man I want to be.

10. Tell me something about you that would surprise your fans?

I’m a volunteer firefighter in my hometown. I work with my dad there and I love it, it’s great to be able to help people. I cannot drive the firefighters' truck yet because you need to have a driving license for at least five years, but I will do it for sure!