Myatt Snider is off to a strong start in his unorthodox NASCAR season that has taken him to two foreign countries so far. 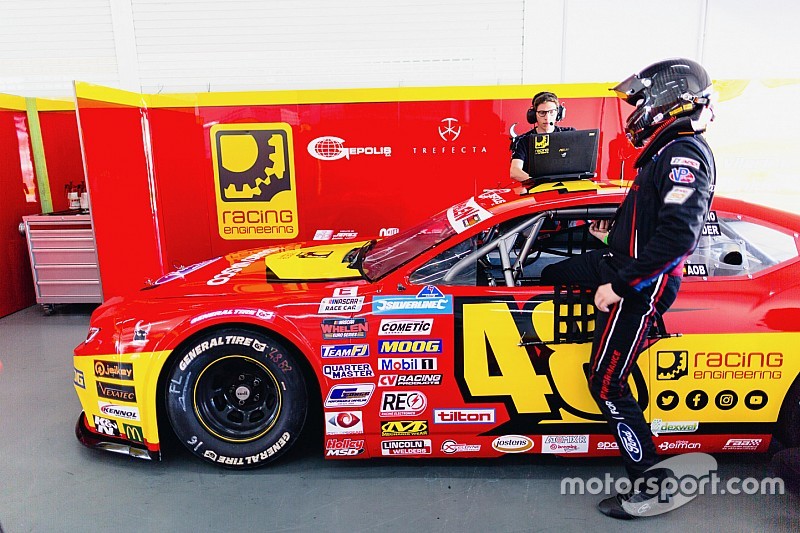 Snider, who earned rookie of the year honors in the Gander Outdoors NASCAR Truck Series last season, originally hoped to be running his second full season in Trucks in 2019 but changes at ThorSport Racing left him with only a part-time ride.

In April, Snider got the opportunity to compete in the NASCAR Euro Series’ ELITE 2 Division, behind the wheel of the No. 48 Racing Engineering Ford Mustang, competing for the overall classification and the rookie trophy.

Through the Euro season’s first two weekends (four races), Snider has already found himself in position to win, won poles and earned his first podium finish most recently at Franciacorta, Italy.

In the Valencia season opener, Snider, 24, was involved in a last lap crash while trying to grab the lead from Andre Castro. He is currently sixth in the series standings, 36 points behind leader Maggi Giorgio.

The series’ next two rounds are at the famous NASCAR American Speedfest at Brands Hatch on June 1-2.

In a recent interview with Motorsport.com at Charlotte Motor Speedway during NASCAR All-Star Race weekend, Snider talked about his NASCAR Euro season, the differences in racing etiquette and prospects for a victory.

How does your experience so far in the NASCAR Euro Series compare with what you expected when you first agreed to participate?

Snider: I did a preseason test with them to kind of get the lay of the land. I went over to a French track in Fontenay-le-Comte so I had a little idea what it would be like. But it’s a little bit different when you actually get in the races and see how the dynamics are. There are some tiny things that are different but it’s like somebody had taken Late Models and started running them overseas. Since you’re in Europe, there are differences. Almost all the racing is governed by the FIA or else no one is going to take it seriously. So, they abide by FIA rules. They are stock cars and they handle like stock cars.

The biggest difference is the driving etiquette I guess you could say. One person pointed out to me is that the American philosophy to try to go for it on (corner) entry and pass them before center, lay the power down before they know what happened. Well, the European philosophy is to set them up prior to the corner and pass them on the straightaway. If you get anywhere close to them on (corner) entry, you’re already making people nervous, no matter if the pass is stable or not.

Given that, how did your pass for the lead go over in the opening round at Valencia?

Snider: I think I did send a strong message in the first race at Valencia. I tried to go for it and the guy cut me off, but I also was there. I thought it was an equal-fault move but not according to the stewards. I did get admonished and got put under probation. I got back to America and everybody was like, ‘You were going for the win. That’s what you do.’ And everybody over there was like, ‘That was too aggressive.’ It’s a fine line I have to walk. It’s just a different dynamic of how you race people and how you pass people. Even then, on exit to a turn, it’s apparently anybody’s game. You can move people out of the way on exit. They will almost let anything fly there. I guess I’ve been kind of spoiled because nothing in NASCAR is really punished per se for stuff on track. There, have a lot of ‘racing rules’ they enforce.

Have you enjoyed the opportunity to race this season even if it’s not in America?

Snider: Absolutely. If I take a step back and look at the grand scheme of things, I’m still racing. I’m in a stock car and I get to travel the world. It’s not an opportunity that many people have and I’m getting to go to these amazing places like Milan, Italy, and Valencia, Spain. I get to experience all these new cultures. I’m trying to make a point every trip to go out explore the areas I’m near.

How competitive do you feel this season and have you established any goals for yourself?

Snider: There are a few operational goals I have. I want to be able to pick up tracks quickly and figure out what I need to do to get around. That’s important, obviously, because I’ve never been to any of these places. At the same time, as far as racing goes, I want to win a few races and I definitely believe I can. I got the pole in both races at Valencia, finished second and sixth at Franciacorta with a locked differential (both wheels turn in unison, regardless of the traction) the entire time, which definitely didn’t make things easy. Our team has a lot of speed and I think we can probably go for the championship.

Does your relationship continue with ThorSport?

Snider: Yes, of course. I spent most of the Truck race weekend at Charlotte in No. 13 team garage seeing what’s happening with them. It’s a learning opportunity in my opinion. Johnny (Sauter) is a guy who’s won the championship and should have won a few more in my opinion. He’s won plenty of races and knows exactly what he needs in a truck. That’s a level of efficiency that I’m trying to reach. If I can pick up some of what he knows – all the better.

I’m working on some races here. There are a few races that I have circled that are kind of important for me. Hopefully, I can work out something to get to do those.