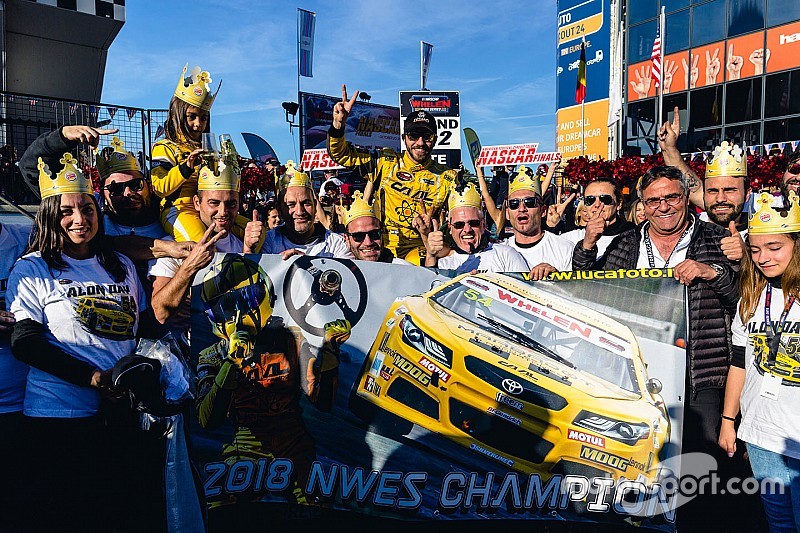 Day didn’t set out to be a trendsetter when he began racing in the only NASCAR sanctioned series in Europe, but that’s what he’s done.

After winning the 2017 Whelen Euro Series championship, Day returned this season determined not to be satisfied with what he and his CAAL Racing team had accomplished in previous seasons.

His resume was already impressive with 10 wins in just 36 starts and half of those starts with top-five finishes.

“I’m so happy for my team and everyone in winning this championship,” said Day. “We had a great year last year (2017) and this year was even better for us.”

Day did what he had to do during the final two weekends of the season - winning the second race at Hockenheim and sweeping the season finale at Zolder.

Day won last Saturday in Zolder, and although he was looking strong to win the title, he wasn’t sure he was going to win until after Sunday’s race.

“I knew going into the final race that we had to finish fourth or better to win the title and you never know what might happen in a race,” said Day. “We were able to win the race and celebrate a title against a tough field of competitors.”

Day also became just the third driver to win multiple titles in a series that Day says keeps getting stronger every season.

“There is no doubt the Whelen Euro Series gets better and better every year,” said Day. “The competition gets stronger and stronger and everywhere we race, the fans attending the races goes higher and higher every time we return.”

The 2018 season started with mixed emotions. He picked up three consecutive wins sweeping the weekend in Spain at Circuit Ricardo Tormo in Valencia and opened up with a win in the next event in Italy at Autodromo di Franciacorta.

After the second race, Day was disqualified and felt he had to work extra hard to clear he and his team’s name after the infraction.

“This was in some ways this was a very hard year for me in NASCAR,” said Day. “When we got DQ’d it was hard for me and my reputation. It took me a couple of rounds after that and winning again to show people that I’m not one who will try and cheat.”

The series competes mostly on ovals and Day has already shown fans throughout Europe - and North America - that he and his fellow competitors in the Euro Series are very capable road course drivers.

Day, along with former champion Anthony Kumpen, are just two of the drivers who have come to North America and made starts in the NASCAR Xfinity, Trucks and Cup Series events over the past several years.

“We have really good road course drivers here in Europe and I appreciate the opportunities we’ve had to show what we are capable of doing  when we get the chance to race in the U.S.,” said Day. “I don’t know what my plans are for next year but I hope I get the chance to compete in some road course events again.”

Day made one start this season in the Monster Energy NASCAR Cup Series and enjoyed his strongest run to date in a NASCAR national series in the an Xfinity Series race in 2016 when he finished 13th at Mid-Ohio after running in the top-five for most of the race.

“I drove an older Dodge in that race and was able to run up near the front,” added Day. “I hope I can get the opportunity to return next year and compete in one of the NASCAR national series.”

While he continues his quest like so many drivers to reach the top levels of NASCAR, he has already seen the benefits of competing in the United States when he can.

“Our series is growing so fast over here and I even had fans come up to me in Germany earlier this year asking me to sign items from the car I drove in Sonoma last year,” Day. “Our fans in Europe really love the pure racing we have in the NASCAR Whelen Euro Series.”

Day will formally celebrate his championship at the NASCAR Home Tracks Champions Awards in Charlotte, N.C., on Dec. 7 at the Charlotte Convention Center.