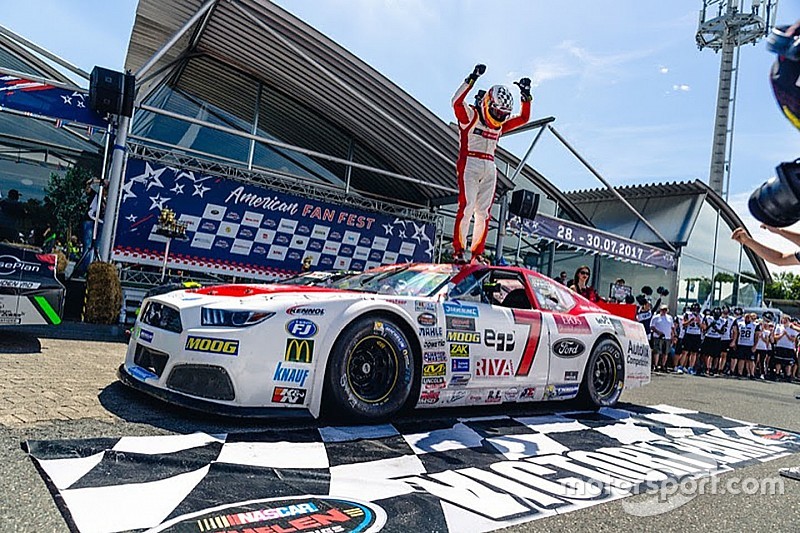 The strong season for Borja Garcia just keeps getting better.

Garcia started from the pole and despite a strong challenge from Anthony Kumpen at times, led flag-to-flag to capture the win in the first visit to Hockenheimring in Baden-Wurtenberg, Germany for the NASCAR Whelen Euro Series on Saturday.

The victory was the fourth of the season for the points leader and fifth overall in his career.

“I’m really happy to win my fourth race of the season and it’s really great that it's the first win for the NASCAR Whelen Euro Series’ here at Hockenheim,” said Garcia. “I have to thank my team who worked really hard to give me a fast race car for today’s race.

“The car was really good at the start of the race and had great balance for the long green-flag run. Towards the end of the race, the car started to slide a bit in the turns and I had work really hard to keep Anthony behind me.”

Although Garcia led the entire way, he felt the challenge from the defending series champion.

“He (Kumpen) was putting quite a bit of pressure on me and it was really a great battle but fortunately I was able to hold him off long enough to get the win,” said Garcia. “I need to get as many points as I can before the final race of the season at Zolder because it’s Anthony’s home track and he’s really good there.”

Although Alon Day won the pole during qualifying on Friday, Garcia started from the point after Day was given a 10-position penalty on the grid for contact in the previous road course race at Brands Hatch.

With four laps remaining in the race, Dominik Farnbacher was involved in an incident in Turn 9 and had to be towed in from the gravel setting up a final dash for the win.

Garcia survived a wild restart that saw the field go four and five-cars wide at times and eventually led to a crash in Turn 3 that brought out the red flag. The race ended due to lack of time.

“The race was really good and I’m sure all the fans enjoyed watching it,” said Kumpen. “My team provided a great car for the race. I was able to close on Borja and started to put pressure on him to make a mistake. I think without the red flag there at the end we had a great chance to go for the win.

“Unfortunately that happens sometimes in racing so all I can I do is be grateful that I have such a great team, great sponsors and supportive race fans. The weekend’s not over, so I’m really looking forward to the race tomorrow.”

French racer Thomas Ferrando pulled off a stunning win in the ELITE 2 division race for his fourth victory of the season and showed everyone he’s a contender for the title this season.

Ferrando now has nine wins in his NASCAR career, jumping to second in the record books for all-time winningest drivers in the ELITE 2 Division.

“I’m so very happy,” he said from Victory Lane. “What a fantastic win today! I had such a great race car and I have my incredible team to thank for it. I think the Hockenheimring is an incredible place!”

Maciej Dreszer followed in second with Jean Baptiste Simmenauer who finished on the podium in his first ELITE 2 race. Martin Doubek and Gil Linster completed the top five.

A few questions with driver Maciej Dreszer in Venray