A few questions with driver Maciej Dreszer in Venray 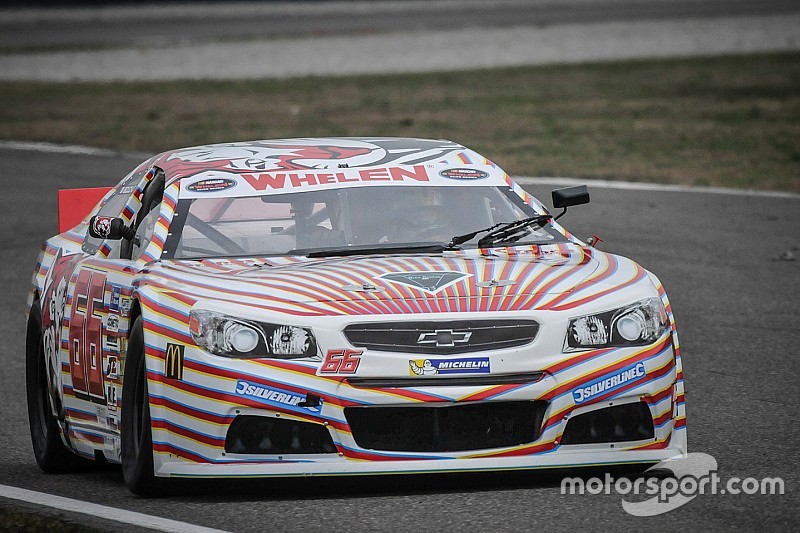 Motorsport.com reporter André Wiegold recently sat down with Polish driver Maciej Dreszer in Venray to talk racing and why he decided to give the NASCAR Whelen Euro Series a try.

Maciej Dreszer is a 21-year-old driver from Krakau, Poland. He started his career with 16 years in the KIA Picanto Cup and later switched to Volkswagen Golf Cup.

Afterwards he moved over to the Toyota TMG GT86 Cup at Nurnburgring in the VLN where he won the championship and the 24-hour race in his class last year.

He's also driven in the GT4 Series and earlier this year he switched to NASCAR Whelen Euro Series at DF1 Racing in the No. 66 car in the Elite 2 championship division.

In Valencia, the rookie finished third twice and at Brands Hatch he scored finishes of third and fourth, respectively. In his most recent race on the oval at Venray he came home fourth and eighth.

André Wiegold asked him several questions concerning his season and why he decided to give NASCAR a try.

After you have been racing a lot of different cars, you decided to race in the NASCAR Whelen Euro Series, why?

"I had a lot of cars in a short time. Now we're in NASCAR and what I really like with this car is that there are no systems which are helping you as a driver. It‘s pure racing. It's only you and the car. I like the solutions in this car because it‘s not so expensive. When you touch someone and something brokes, it's not that expensive. But this are is also very fast. It doesn‘t need so many solutions like for example a GT3-car. But I think the NASCAR-car is more fun for a driver and its a bigger show for the spectators than GT-racing. This is why I've done that step."

How was the start in your new racing series and team?

"The beginning of the season was quite crazy because I had not so many training sessions. The car was completely new for me. I’m still learning how to drive this car but I think I‘m getting real close to the limit of the car. I love this car. It‘s one of the bests car I‘ve ever been driving. It very hard for drivers because you have to be really good because it don‘t have any systems. It‘s very demanding also physically. I have to train a lot to race like I raced today on the oval.

Was the race at Raceway Venray your first race on an oval track?

"It was my first time on an oval track. I haven‘t got any opportunity to race or train here before this weekend. On Friday they gave me the possibility to drive on the track with a Renault Twingo. This car has completely no connection to our NASCAR-car. But I have to be honest: It was fun. What I like to race in an oval is that you can be very close to each other. You have a car in front of you only 5 centimeter away. Behind you its 10 centimeters. It gives you a lot of adrenaline even more than on a road course. Everything depends on but it‘s also very good. I love the road courses. But after this weekend I also love oval tracks. I think I will do a lot of ovals, too. I had a lot fun here and I think I can learn a lot on ovals to get a feel for the car. You have to feel the car and have to know what's happening to the car. It‘s all about you instinct. That is something I like very much."

The next race will be at Hockenheim in Germany. You are driving the short version of the track. What are your goals?

"I hope I will win in Hockenheim. I had some possibilities to train there. I like the circuit. I like circuits like Hockenheim but I love tracks which are dangerous where you have to be a little bit crazy and have big balls. This is why ovals and the Nurnburgring are very nice for me."

Your on the way to have a good chance to win the rookie championship. Then you would get a chance to race in the US. Would you like to make that step?

You switched your cars and teams a lot in the past. Is racing for DF1 Racing a short term or a long term project for you?

"The first time I want to stay longer than one season in this series. In my career it was always one season and then the next step. Like I said before: The NASCAR Whelen Euro Series is nice for me. I’ve learned to race on the road courses and I don‘t want to miss it. The NASCAR Whelen Euro Series is perfect to connect road courses and ovals. I want to fight for the championship. Maybe it will be not that season because I have to learn more about the car. We have also to work on the setup so the car fits for me. Every driver has got a different style. I’m still looking for some possibilities to have not only a faster car but a car that fits better to my style of racing. So everything is changing. We will do a big step with the car for sure. I also want to stay at DF1 Racing in the next season. I want to connect my whole career to DF1 Racing because it‘s a very nice team. I think it‘s good for me. We want to work together so that we can fight for the championship."

Nicola Larini to compete in Whelen Euro Series at Franciacorta