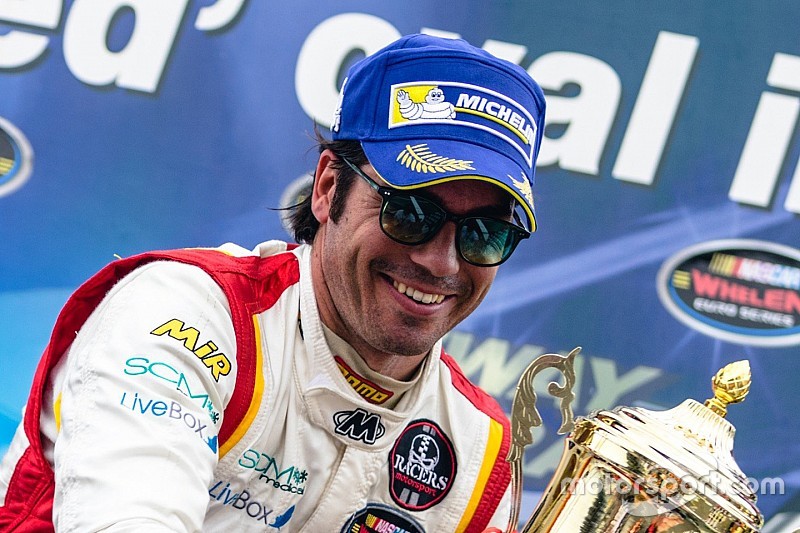 Spaniard scores third NASCAR Whelen Euro Series victory of the season to extend his points lead heading into second half of the season.

After finishing second in the first race of the weekend on Saturday, Borja Garcia dominated in his first career win on an oval track in the ELITE 1 Round 6 at Raceway Venray.

Just like his counterpart and defending series champion Anthony Kumpen did on Saturday, Garcia led flag to flag to score his third win of the season and extended his lead in the points standings ahead of the final race of the NASCAR Whelen Euro Series regular season.

After recording the fastest lap in the first ELITE 1 division race of the weekend to earn pole award honors for Sunday’s event, Garcia took the lead from the start of the race and withstood a challenge on the restart on Lap 20 and drove away giving Racers Motorsports its first-ever ELITE 1 division win.

“This is fantastic,” said an ecstatic Garcia from Victory Lane. “I won at Raceway Venray!  I’m really happy and very excited for my team.  I’m so proud of them!  We had a few challenges before practice but my team is awesome, they made some adjustments and gave me a winning car.  I’m really happy!”

Garcia entered the weekend as the points leader in the ELITE 1 division and now leads Kumpen by 26 points (263-237).

“My second place finish yesterday and win today was very important for the point standings,” Garcia said.  “This is my third win of the year, first on an oval track and I’m really excited about this season and the opportunity to contend for the NASCAR Whelen Euro Series Championship.”

Kumpen was happy with his finish despite not being able to sweep both races in The Netherlands.

“Yesterday I won, today I finished second,” said Kumpen. “Considering the circumstances, I think second was the best we could do today.  The car received a lot of damage this morning when it was caught up in a crash during the Elite 2 race.  I have a fantastic team and they were able to repair the car in time for the start of the race but we never had an opportunity to make any adjustments to get the car handling as it did yesterday.  All in all, I really can’t complain with our performance this weekend.”

Gianmarco Ercoli started in the rear of the field and finished sixth after Braxx Racing worked on his car overnight after he suffered mechanical problems on Saturday. Completing the rest of the top-10 were Marc Goossens, Frederic Gabillon, and Marko Stipp ninth. Stipp also won the Challenger Trophy.

Felipe Rabello took the lead with just two laps remaining in the ELITE 2 race on Sunday at Raceway Venray. He also held on to score his first NASCAR Whelen Euro Series win in a green-white-checkered finish in Saturday's race.

Rabello, who also won on Saturday, claimed back to back wins in his oval racing debut by beating his fellow countryman Marconi De Abreu to score the first ever Brazilian 1-2 finish in NASCAR Whelen Euro Series history.

The NASCAR Whelen Euro Series will now head to Germany for the first edition of the American Fan Fest at the legendary Hockenheimring on July 29-30.