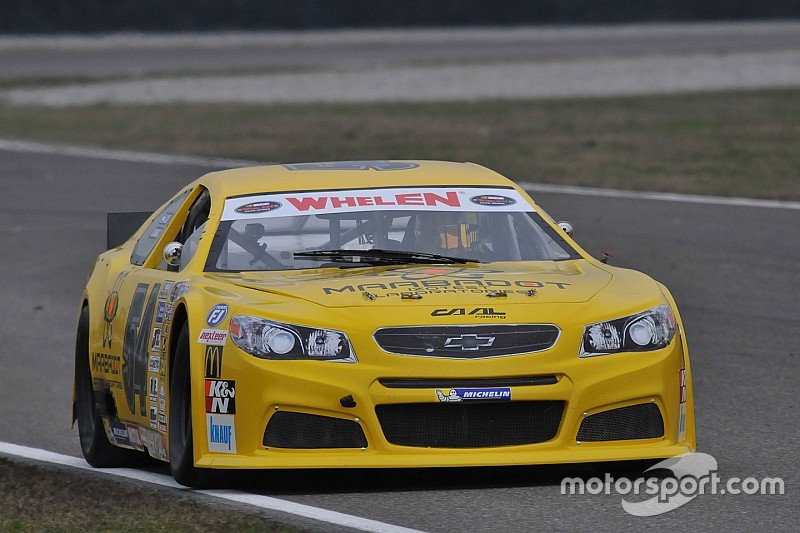 The Ashdod, Israel native picks up his second win of the season and eighth of his career at the right time taking the opener of the playoffs for the NASCAR Euro Series Saturday afternoon.

Day was able to pass polesitter Frederic Gabillon on Lap 2 and remained out front the rest of the way to score the easy win and in the process take the lead in the points standings by five points over Borja Garcia and seven points over defending series champion Anthony Kumpen.

"I‘m ecstatic about the win today because it was a crazy race,” said Day. “I was really fast in the dry but I know Fred Gabillon is a real fighter and I‘m glad that we had very clean and nice battle for the lead.”

Day, who recently became the first NASCAR Whelen Euro Series driver to compete in the Monster Energy NASCAR Cup Series at Sonoma in June, was thankful to his team.

“My CAAL Racing team is amazing and did an impressive job,” he added. “I‘m very thankful to all the mechanics and the other team members. The car was so fast, probably the fastest I’ve ever had. I know this track very well and we tested here a few times with the whole team. We did our homework and we worked hard and you see, practice makes it perfect."

Gabillon held on to finish second to stay close to Day in the race for the championship heading into Round 2 of the playoffs on Sunday.

"It was a good race for me but it was impossible for me to keep Alon at bay. We’re not that good yet when we have a dry track,” said the Frenchman. “It will be a very hard second race for us on Sunday if the weather stays like this, but I‘m still hoping for the rain to come. Marc, who finished behind me, was really fast too. He was better than me in the slow turns but in the faster turns I was a little bit stronger than him. It was an amazing and fair battle."

Thomas Ferrando scored his third consecutive win in the ELITE 2 division to get out to a solid start in the playoffs for the NASCAR division. It was his sixth win of the season and he’s now just two short of Longin’s record of eight wins in a season.

Much like Day, Ferrando passed the pole sitter of the race and went on to score the win. He was able to get past Ulysse Delsaux on Lap 9 and went on to win by 1.5 seconds.

"It was a very intense Semi Final here at the Autodromo di Franciacorta”, said Ferrando.  “In the beginning Ulysse was pretty fast. I had to overtake him quickly to maximize the result. I think we‘ve done a great job on the car during practice. The whole Knauf team is just amazing. I also hope to break Stienes Longin wins record of 8 races this season and win the championship. Even if I don‘t win tomorrow it‘s important to score as many points as possible to have a comfortable situation in the Zolder Finals."

Carmen Gil Boix was sixth with Arianna Casoli seventh scoring her first career top-10. NASCAR scoring was still working on the complete results and will be updated later.

Both NASCAR Whelen Euro Series ELITE 1 and ELITE 2 divsions will return to action on Sunday afternoon in Round 2 of the playoffs.