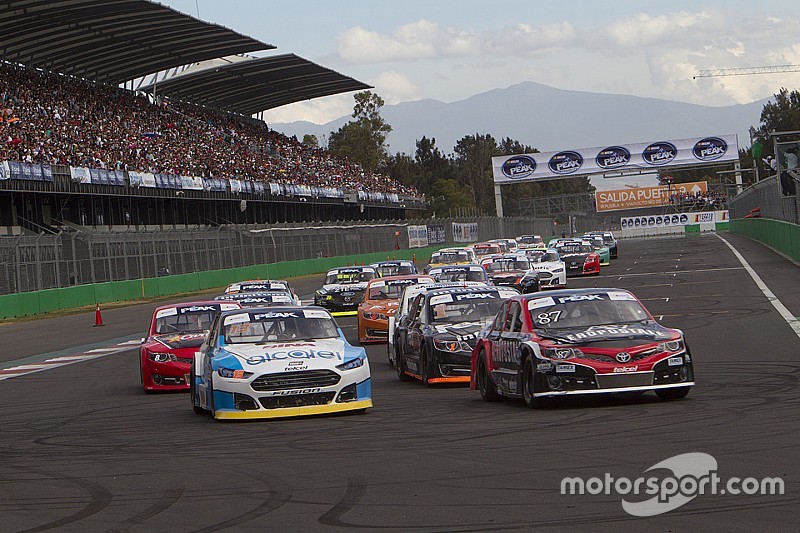 The Series conducted an exhibition race this Sunday at the Autodromo Hermanos Rodriguez where Homero Richards and Rogelio López were the winners.

NASCAR Mexico is ready to return to the track full-time in 2017. The Series presented itself this Sunday under the new format in which they will compete next year, at the Autodromo Hermanos Rodriguez in Mexico City.

The main grandstand was packed for the two races which lasted 40 minutes each, where Homero Richards and Rogelio Lopez scored wins respectively.

“It is a very different format to the one we knew," said Homero Richards after he won the first race. "We now need to accelerate from the first moment and fight with everything. I liked it a lot and I think that is something interesting to compete."

In the first race, Rafael Martinez started from pole position driving the Ford No. 22 while Homero Richards, in the No. 20, won his race from the third position. Between both competitors, in second, was Santiago Tovar driving the No. 8 car.

As soon as the green flag waved, Richards went on the attack, but his race pace was quickly cut before an accident involving Jorge Contreras Jr. which led to a 20-minute red flag, reducing the time of the green flag.

On the restart, Homero dominated in the first position ahead of Rafael Martinez; while Jorge Goeters got into the fight for the first five positions next to Abraham Calderon and Rogelio Lopez.

With just 20 seconds remaining in the race, a yellow flag was presented forcing a green, white and checkered flag restart. Richards took off as soon as the race got underway for the final two laps, getting a lead of 0.4 seconds over Martinez with Goeters in third place.

“It has been a great victory," said Richards. "Since yesterday we had the potential and showed it in practice. In qualifying we made a mistake with the balance, but in the end, we corrected it to bring us this victory that it is important to close the year. It's great that this championship will be back, especially with a race on a track that means as much as it does to the Rodriguez Brothers".

The 25th for Lopez

NASCAR Mexico premiered for the second race of the afternoon, a format of an inverted grid, with the first 10 starting in reverse order, which put Luis Felipe Montaño in the first position, followed by Alex Gonzalez, Piero Rodarte and Santiago Tovar in the first two rows. Homero Richards started from the tenth position.

However, Richards was unable to defend his victory and left the competition before the end of the half of the race after a contact that broke down the carburetor of the engine.

"It is sad to not be able to finish the second competition, however, we have learned a lot," said Richards. I think that is something very fun but there are still aspects to improve".

Luis Felipe Montaño was also a victim of an incident while Piero Rodarte did not kept the pace to fight for the victory. All these circumstances combined for Rogelio Lopez, accompanied by his nice handling, help him to climb to the first position with a comfortable lead of 2.0 seconds after crossing the finish line in the first place, leaving second place to Abraham Calderón and Álex González in the third place.

"It is the 25th victory. I don't know if you count as an official triumph, but it would be the silver victory in my career," said Lopez, who has the record for most number of wins in the Series. "I miss these runs, they are very special and I want to thank NASCAR for the great effort they have made to return the category. Without a doubt, the format is very fun and is something that I liked. I'm anxious to start the next year.

"In the end, I want to thank Abraham Calderón helped me because I already almost had no fuel. We reached the goal with very little gas".

Lopez ascended to the podium accompanied by Calderon and Gonzalez.