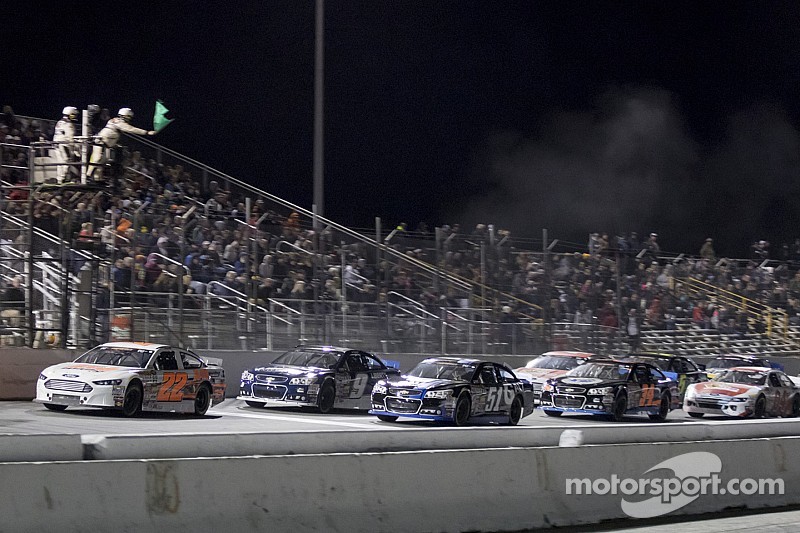 Although Hill won the pole (the first of his career) hours earlier, his autograph line wasn’t nearly as long as some of the other up-and-comers – Kaz Grala, Gray Gaulding, Rick Abreu or Dalton Sargent. The lack of attention didn’t seem to bother the 20-year-old Winston, Ga.-native – neither did the comment from a middle-aged woman that Hill “isn’t as young as some of the other drivers”.

While that might be true, when it comes to momentum, Hill has plenty.

And on Sunday night, he won his third consecutive K&N Pro Series East race - and led every lap. At the end of 2014, Hill closed out the season with wins at Greenville-Pickens Speedway and Dover Downs.

We’re a small family-owned team trying to make it in NASCAR.

“To be able to sit on the pole, run all 150 laps in the lead and be able to win is pretty special to me,” Hill said. “We’re a small family-owned team trying to make it in NASCAR.”

On Thursday, Hill was back over at the big track – Daytona International Speedway – where he was looking to make his debut in a truck on the 2.5-mile oval. Hill didn’t disappoint. He topped the speed chart in first practice with a lap of 188.509 mph on his 10th of 13 laps behind the wheel of the No. 82 A&D Welding Ford for Empire Racing Group.

Hill made two starts in the Camping World Truck Series last season for Ricky Benton. He finished 26th at Martinsville in his NCWTS coming out party and improved by six positions for a 20th-place finish at Homestead-Miami Speedway.

Doing a lot with a little

What Hill lacks in resources, he makes up for in talent. Entering just his second full season on the NKNSE tour, Hill is returning to tracks and is able to draw from his experiences to improve his performance. He used lessons learned from Dover to manage his tires at New Smyrna on Sunday and the payoff on restarts was dramatic.

“I learned what I needed to do to get a really good start at Dover and I applied it (at New Smyrna),” Hill said. “That seemed to be the difference between them being beside me at the start-finish line and me being two to three car lengths ahead by Turn 1. That was really awesome.”

For now, Hill plans to run for the K&N championship. With funding coming primarily from his father – and a few anonymous sponsors – Hill is covered for the season but he wants to race more. Like most young competitors, he aspires to compete in one of NASCAR’s top tours one day.

To be able to run up front with those guys and beat them like we did (Sunday), shows how good we are as a race team and how well we work together.

“It means so much more to me when we win a race knowing we have cars from Turner Scott (Motorspots) and NTS – all those guys out there – that are putting so much money into it,” Hill said. “And to be able to run up front with those guys and beat them like we did (Sunday), shows how good we are as a race team and how well we work together.

“We really need some sponsorship (to take it to the next level)…We would love to run some truck races, ARCA or XFINITY races to stay in the seat. Running 14, 15 races doesn’t keep you in the seat much at all. If we could get some sponsorship to run more races that would be awesome.”