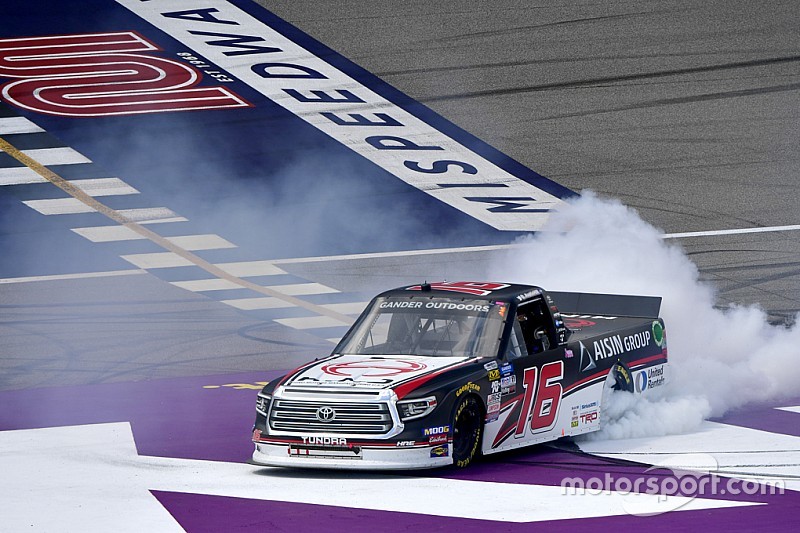 Hill held off Sheldon Creed – who needed a win to make the playoffs – in overtime to win Saturday’s Corrigan Oil 200 at Michigan International Speedway.

Hill had started the season with a victory at Daytona but had struggled of late, including a last-place finish last week at Eldora.

“Oh man, this is huge,” Hill said. “We’ve had a struggle these last four or five races. We just kept having issues and can’t finish the races. Man, these guys have worked their tails off day and night trying to put these trucks together.

“This is actually a brand new truck, first time it has seen the race track was yesterday. We unloaded and we had to work out some bugs on it but we got driving really good. I was really happy with the speed in it.

“This race was crazy. I had to come from the back a few times. I had a speeding penalty one time and I kind of thought our race was done but, man, we came back up through the field.”

On Lap 66 of the scheduled 100, Codie Rohrbaugh spun off Turn 4 to bring out a caution. A handful of teams pit but Todd Gilliland stayed out and remained in the lead when the race returned to green on Lap 70.

With 26 laps to go in the race, Ben Rhodes powered around Gilliland to take the lead. One lap later, Harrison Burton got the front for the first time in the race as Ankrum moved into second.

On Lap 78, Hill was able to take the lead for the first time. Ankrum was second followed by Crafton.

Christian Eckes spun between Turns 1 and 2, which brought out another caution. On the restart with 10 laps to go, Hill remained in the lead, followed by Ankrum, Crafton, Moffitt and Creed.

Eckes spun again on Lap 94 – the third time in the race – to put the race back under caution just after Ankrum had got around Hill for the lead.

When the race returned to green on Lap 97, Ankrum led followed by Hill, Moffitt, Crafton and Dippel.

On the restart Ankrum got turned by Crafton which triggered a multi-truck accident that also included Natalie Decker, Gilliland, Jordan Anderson and Anthony Alfredo. Hill was the leader when the caution was displayed.

When the race returned to green in overtime, Hill led the way followed by Moffitt, Crafton, Burton and Dippel.

Moffitt went three-wide with three laps remaining in the stage to grab the lead and held on for the Stage 2 victory.

Following the break between Stages 1 and 2, chaos erupted on pit road as Sauter got into Rohrbaugh, sending him into Stage 1 winner Chastain, causing significant damage and forcing him to the garage.

“It was gut-wrenching for sure,” Chastain said. “We had perfect execution. It’s tough to lose a race with a truck like we had today.”

In addition, Gilliland was forced to restart from the rear of the field for a having a crew member over the wall too soon.

When the race returned to green on Lap 28, Rhodes led the way followed by Moffitt and Eckes.

With 10 laps remaining in the second stage, Rhodes and Enfinger were dueling for the lead with Burton having moved up to third.

On Lap 32, Friesen suffered a flat tire and was forced to put under green.

On Lap 33, Eckes spun off Turn 2 to bring out a caution. He had a flat tire but no damage to his truck. Several drivers elected to pit under the caution but Enfinger remained on the track and inherited the lead.

When the race restarted with four laps to go in the stage, Enfinger led the way followed by Moffitt and Anderson.

Chastain held off a fast-approaching Rhodes to take the Stage 1 victory, his third stage win of the 2019 season.

Eckes was third, Moffitt fourth and Gilliland completed the top-five.

When the race got underway, Ankrum and Self were both black-flagged by NASCAR for getting out of line at the start of the race before taking the green flag.

Chastain, who started on the pole, held the lead early as Gilliland moved into the second position on Lap 3.

After five laps, Chastain maintained a small lead over Gilliland with Rhodes running in third.

With 10 laps remaining in the first stage, Rhodes had moved into the second position as Gilliland dropped to third, Eckes was fourth and Enfinger fifth.

After 15 laps, Rhodes was trying to challenge Chastain for the lead as Eckes moved into third. Crafton, who started from the rear of the field, had moved into the top-10.

Crafton (engine change) and Norm Benning (unapproved adjustments) had to start the race from the rear of the field.