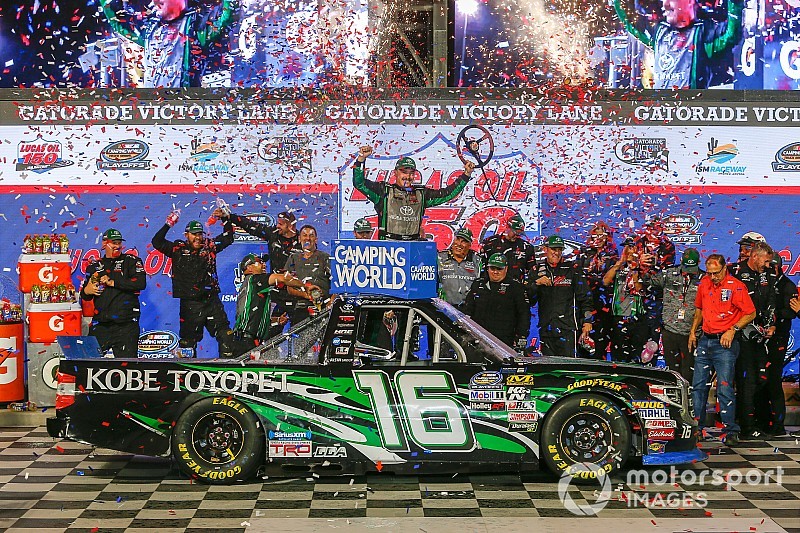 Brett Moffitt made the most of a late-race restart to snag his fifth win of the season at ISM Raceway as the Championship 4 was set.

Just when you thought he might be content to finish in the top three and advance to Homestead, Brett Moffitt showed he wanted more.

After a late spin by Riley Herbst set up a three-lap dash to the finish with Noah Gragson and Grant Enfinger on the front row but it was Moffitt who emerged victorious after a daring three-wide pass to the inside.

While Gragson and Enfinger made contact on the restart, moving up the track, Moffitt dove low below the apron and overtook them both out of Turn 2.

“We just had a bad ass Toyota Tundra,” said Moffitt. “We were focused (on Homestead) already and knew we just had to have a smooth night (tonight) but when the No. 98 (Enfinger) got up there we started worrying and knew we had to win.

“I can’t say enough about this group and all of our partners and HRE team.”

Gragson was able to finish second and he’ll join Moffitt, Johnny Sauter and Justin Haley in the Championship Four at Homestead-Miami Speedway next weekend to race for the 2018 NASCAR Camping World Truck Series championship.

Harrison Burton was third with Enfinger fourth and Stewart Friesen rounding out the top five. Sauter was sixth with Tyler Ankrum seventh and Derek Kraus finishing an impressive eighth in his first truck series start.

The final stage was slowed twice by cautions with the first yellow flag of the stage needed when John Hunter Nemechek spun while leading the race on Lap 177 trying to fend off Enfinger.

Gragson led the field to the green flag and stayed out front until Lap 33 when Moffitt was able to take the lead on the restart after the first caution flag of the race.

The yellow flag was displayed after a three-truck incident involving Todd Gilliland, Ankrum and Jason White in Turn 3.

On the restart Moffitt got a good jump and was able to pass his fellow championship contender and stay out front the rest of the first stage of the race.

The segment remained green the rest of the way with Friesen third and Burton fourth. John Hunter Nemechek completed the top five.

Burton was able to start the segment from the point and remained out front the entire segment to pick up the stage win.

Matt Crafton is trying to advance to the Championship Four after a one-year absence and finished just behind Burton in second. Friesen was third with Haley and Ben Rhodes completing the top five.

Burton, who is not eligible for the playoffs, led by as much as one second in the stage before Crafton was able to pull up to his rear bumper on the final lap going for the stage win and championship point.

Enfinger was sixth while Brett Moffitt was penalized for speeding during the pit stops and was forced to restart Stage 2 outside the top 10. The championship contender was able to rebound and finish seventh.