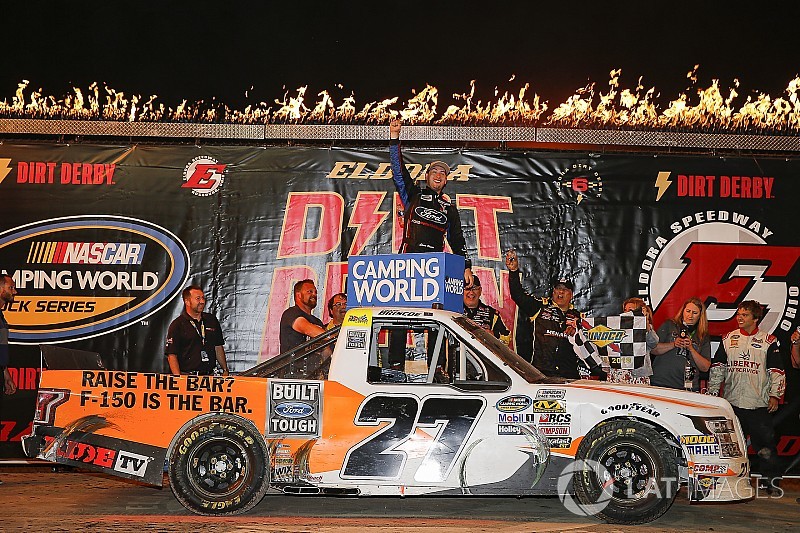 Chase Briscoe picked up his first NASCAR victory of the 2018 season in dramatic fashion.

Briscoe, who is running a limited scheduled in IMSA and NASCAR Xfinity this season, was competing in his only scheduled Camping World Truck Series race of the year.

"I know (Enfinger) is running for a championship and he's our teammate. I was't going to wear him out, I wasn't going to just wreck him for the win," Briscoe said. "We rubbed and I definitely let it float on the way to the wall and I'm sorry for that, it's not how I race.

"It just means to much to win Eldora. I was growing up as a dirt guy. My grandpa won here and this is our Daytona for dirt guys. This win is for all the dirt guys out there who don't get a shot. Tonight proves a dirt guy can do it at this level.

"I'm so thankful that Ford allowed me to do this race. I was begging them about three weeks ago to let me do it and it came together at the last minute. It's awesome to be in Victory Lane."

Asked about stopping after Stage 2 to take new tires and if he was concerned about getting back to the front, Briscoe said, "Yeah I was worried to death. I thought track position was way too big at the time. Honestly, without that caution I didn't have a chance to win that race."

A multi-truck wreck with two of the scheduled 150 laps remaining set up the overtime finish with Briscoe in the lead followed by Enfinger and Logan Seavey.

During the break between Stages 2 and 3, Briscoe and Enfinger elected to pit while Seavey stayed out and inherited the lead when Stage 3 went green on Lap 92.

With 50 laps remaining, Seavey held a more than two-second lead over Friesen while Briscoe, on new tires, had worked his way back up to eighth.

With 40 to go, Seavey moved out to a more than four-second lead over Friesen.

Briscoe made his way into third, behind Seavey and Friesen with 22 laps remaining in the race.

Tyler Dippel and Austin Wayne Self got together while battling for sixth place with 20 laps remaining to bring out a caution and erase Seavey’s lead. On the restart with 14 to go, Seavey led followed by Friesen and Briscoe.

Several trucks, including Todd Gilliland, Myatt Snider and Austin Hill, wrecked off Turn 4 with 13 laps left to bring out another caution. On the restart with five to go, Seavey remained out front followed by Briscoe and Enfinger.

Briscoe powered into the lead on the restart.

Briscoe held off a furious challenge from Enfinger to take the Stage 2 victory.

Seavey finished third, Self was fourth and Chris Windom completed the top-five.

“I got a really awesome truck right now,” Seavey said during the break. “It’s starting to feel like the track is adding some grip. We’re going to get some more race grooves. I’m really liking it right now.”

During the break between Stages 1 and 2, Ben Rhodes was among several drivers who elected to remain on the track and continued to lead when Stage 2 went it green on Lap 41. He was followed by Briscoe and Tyler Dippel.

With 45 laps left in Stage 2, Rhodes had built up a two-second lead when he snagged the wall and developed tire problems that forced him to pit road. Briscoe inherited the lead as Rhodes fell two laps down.

Dippel and Crafton were involved in an incident on Lap 54 that brought out a caution. Ryan Newman also got collected in the incident and made an unscheduled pit stop about the same time.

On the restart on Lap 61, Briscoe led the way followed by Windom and Enfinger.

With 20 to go in Stage 2, Briscoe held a slight advantage over Enfinger. Windom was third, Snider fourth and Seavey had moved back up to fifth.

Seavey moved up to third with 10 laps to go as Briscoe continued to hold a solid lead over Enfinger. Friesen moved back into the Top 10 with seven laps remaining in Stage 2.

Rhodes held off Seavey while running the high groove to claim the Stage 1 victory, his fourth stage win of the season.

“It’s stressful up here in the lead,” Rhodes said during the break. “It’s getting really, really slick.”

Rhodes, who started on the pole, took early command of the race and moved out to a two second lead over Gilliland within the first five laps.

With 31 laps to go in the first stage, series points leader Johnny Sauter spun to bring out the first caution. The race returned to green with 36 to go and Rhodes still in the lead.

Three laps later, Friesen moved up into the second position in an effort to challenge Rhodes for the top spot.

Justin Fontaine spun in Turns 3 and 4 to bring out a caution on Lap 21. Sauter received the free pass and returned to the lead lap. On the restart on Lap 26, Rhodes continued to lead the way.

Friesen got spun by Windom to bring out another caution on Lap 28. Friesen too the opportunity to pit for adjustments on his truck.

On the restart on Lap 34, Rhodes remained out front and Seavey has moved into the runner-up position.

Wendell Chavous had to start the race from the rear of the field for making unapproved adjustments following qualifying.

Matt Crafton looking for a second "sweet victory" at Eldora

Noah Gragson to sit out Saturday's Truck race due to illness