Crafton conserves to win in Kansas 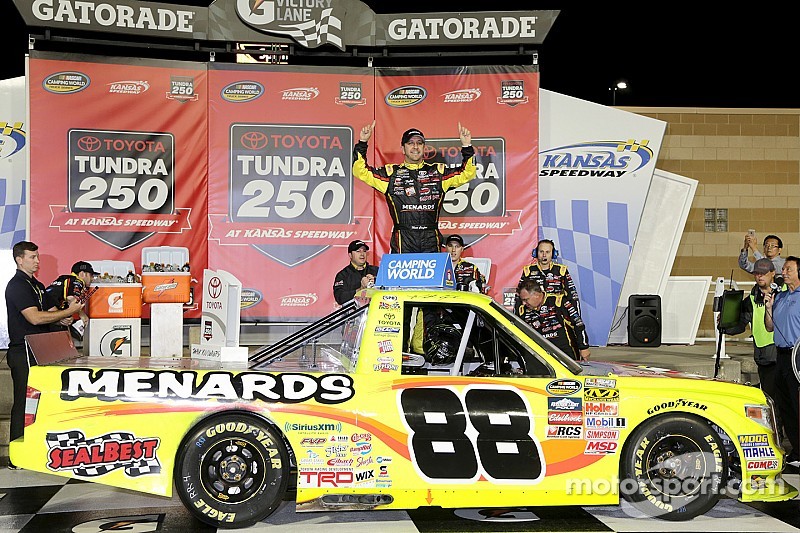 Erik Jones dominated the event but would run out of fuel with five laps to go.

As trucks ran out of fuel in front of him, Matt Crafton was able to find enough fuel to make it to the end of the Toyota Tundra 250 NASCAR Camping World Truck Series race at Kansas Speedway on Friday night.

"I'd rather be lucky than good some days, and we were lucky today," Crafton said.

Ryan Newman finished second, Johnny Sauter was third, Timothy Peters was fourth and Cameron Hayley rounded out the top-five, all having enough fuel to get to the end.

According to Sauter, the race turning into a fuel mileage contest was to his benefit.

"I didn't really have a choice but to save fuel," Sauter said, reporting an engine issue late in the race.

Erik Jones dominated the race, leading all but 10 laps before running out of fuel with five laps to go in the 167-lap race. The laps-led stat gave Jones the distinction of leading the most laps in a Truck Series race on a mile-and-a-half track in series history.

"We had, by far, the best Toyota Tundra here," Jones said. "It's just a shame that races have to come down to fuel mileage like that."

Reddick inherited the lead when Jones ran out of fuel, but he ran out of gas himself with two laps to go. Daniel Suarez also ran out before Crafton took the lead on the final lap.

Reddick started in the back in a backup truck after wrecking with Brad Keselowski Racing teammate Austin Theriault during qualifying earlier in the day. He was up to third for a restart following a lap 41 caution. He restarted with the lead after getting off pit road first during the fourth and final caution on lap 112, but after a battle with Jones on the restart, Jones regained his lead and maintained the position until his fuel ran out.

Crafton was the best of the rest

Jones started on the pole, and throughout the first half of the race, saw Crafton in his rearview mirror in second through most of the second half of the race. Crafton got off pit road ahead of Jones during the second caution of the race on lap 41, but Jones retook the lead after a four-way battle with Crafton, Reddick and Newman.

Crafton, though, was dropped back through the field by a strategy of taking four tires during a lap 66 caution, followed by a problematic restart. Newman replaced him in second, but after a fuelk only stop when Jones took two tires, he lost ground to Jones. Newman was able to maintain second, but by the time the final yellow flag waved in the final 60 laps, he was 11 seconds behind Jones.

Newman had to restart 21st with 52 laps to go after his crew lost control of a tire on pit road. He made up 13 of those spots in the first green-flag lap after the restart and seemed to stall out in the seventh spot before trucks began to run out of fuel in the closing laps.