Reigning NASCAR Truck Series champion Sheldon Creed picked up his first win of the 2021 season thanks to avoiding a multitude of wrecks in the final 35 laps. 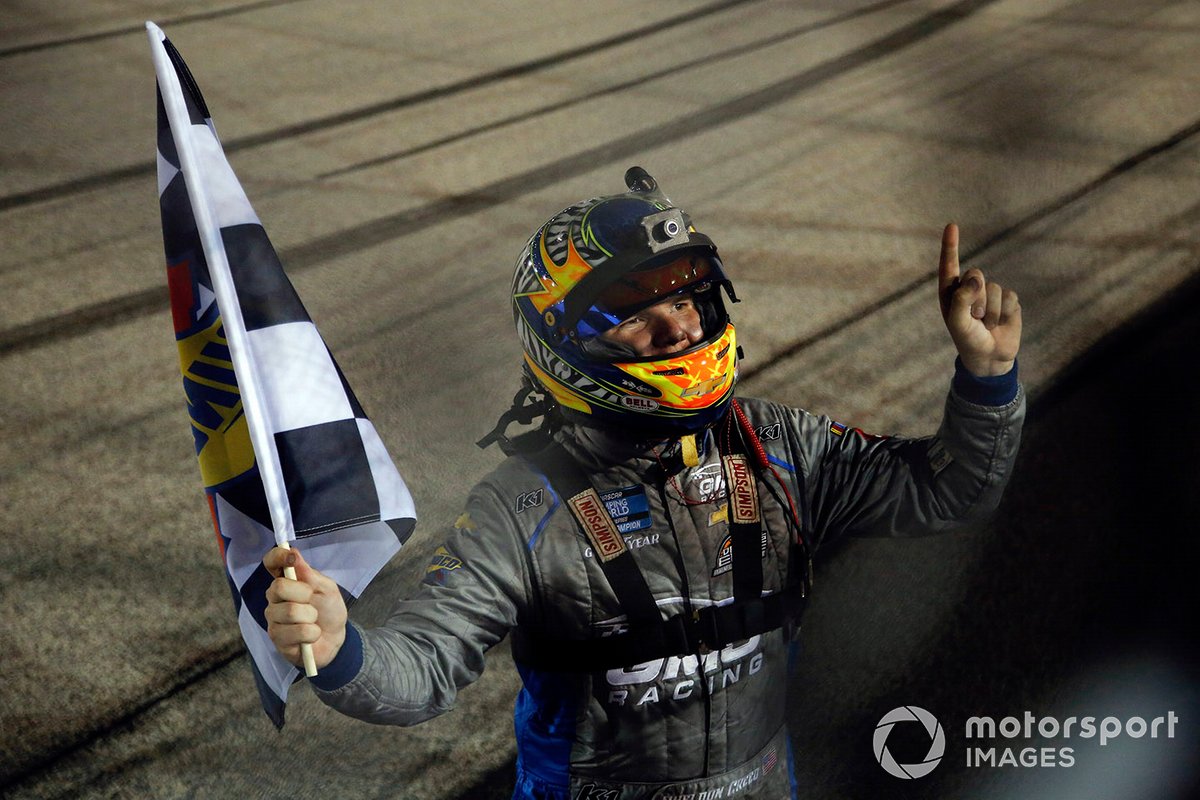 Creed led the way on a restart with two of 147 laps remaining and quickly powered out to a sizeable lead. After taking the white flag, a caution was displayed – the fifth in the final 35 laps – when Hailee Deegan wrecked on the frontstretch.

The caution ensured Creed’s victory at Darlington (S.C.) Raceway, which also came with a $50,000 bonus as part of the Triple Truck Challenge. Should Creed win the next two races at Circuit of the Americas and Charlotte, he will collect an additional $500,000.

The win is the sixth of Creed’s career and locks him into the series playoffs for the second consecutive season.

Creed got in position to challenge for the win after avoiding getting caught up in a massive 17-truck pileup on a restart on Lap 118. He took the lead for the first time on Lap 140 and led only seven laps in the race.

“It feels great,” Creed said after the race. “We didn’t have the best truck, that’s for sure. I was really tight and then I was wrecking loose. I was just doing everything I could. I was really aggressive on restarts and I’m sure I didn’t make any friends tonight but that’s what it takes.

“I’ve just tried to stay focused. We’ve been struggling. We’ve been getting better trucks the last couple weeks and all I ask for is something I can race with.

Following the break between Stages 2 and 3, most of the lead-lap trucks remained on the track and Nemechek continued to lead when the race returned to green on Lap 96.

Timothy Peters spun off Turn 4 on Lap 102 to bring out a caution. A handful of trucks elected to pit but Nemechek was among those who stayed on and continued ton lead when the race returned to green on Lap 107.

After contact from Ryan Truex, Tanner Gray spun down the frontstretch on Lap 111 in an incident that also collected Akinori Ogata and Timmy Hill.

Another group of drivers pitted under this caution but again Nemechek stayed out. He led the way on the restart on Lap 118 followed by Austin Hill and Corey Heim.

As the field took the green, Stewart Friesen appeared to get into the back of Heim, which sent Heim into leader Nemechek and ignited a massive accident that collected more than 15 trucks, including most of the contenders for the race win.

The race was red flagged for nearly 13 minutes while NASCAR and safety trucks worked to clear the track.

Rhodes, who had restarted ninth, ended up as the leader followed by Friesen, Ryan Reed, Crafton and Anderson before some elected to pit.

Chandler Smith was parked by NASCAR during the caution after dropping brake rotors on the track and being warned for his speed under caution.

When the race returned to green with 17 laps to go, Rhodes led followed by Friesen, Sauter, Creed and Parker Kligerman.

As the field entered Turn 2, Kligerman appeared to cut a tire, turned right into Friesen and both wrecked to bring out the caution.

The race returned to green with eight laps remaining and Rhodes still leading the way.

Creed got around Rhodes in Turns 3 and 4 to take the lead for the first time on Lap 140 but next lap Danny Bohn hit the Turn 2 wall to place the race back under caution.

Once the race returned to green with two laps remaining, Creed led the way followed by Rhodes, Hocevar, Sauter and Crafton.

Nemechek returned to the lead on a restart with two laps to go then held of Heim to take the Stage 2 win, his second stage victory of the 2021 season.

Hocevar was third, Chandler Smith fourth and Friesen rounded out the top-five.

Following the break between Stages 1 and 2, all the lead-lap trucks elected to pit with Todd Gilliland the first off pit road. He led the way on the restart on Lap 53.

Nemechek got around Todd Gilliland shortly after the restart in Turns 3 and 4 to reclaim the lead.

With 25 laps remaining in the second stage, Nemechek opened up a more than 2.5-second lead over Todd Gilliland with Zane Smith in third, nearly 5 seconds behind the leader.

With 15 laps to go, Todd Gilliland had managed to cut his deficit to Nemechek in half while Friesen moved into third.

Bayley Currey was forced to pit under green to fix a flat tire on Lap 77.

On Lap 81, Chase Purdy and Akinori Ogata wrecked in Turn 4 to bring out a caution. Several teams decided to pit with Nemechek the first off pit road.

When the race returned to green on Lap 89, Gray was among those who stayed out and led the way followed by Timmy Hill.

Todd Gilliland held off late charge by Nemechek to take the Stage 1 win, his first stage victory of the 2021 season.

Zane Smith was third, Austin Hill fourth and Creed rounded out the top-five.

Nemechek started on the pole and led the first six laps until Austin Hill got around him off Turn 2 to grab the top spot on Lap 7.

On Lap 17, NASCAR displayed a competition caution to allow teams to check tire wear. Most of the lead-lap trucks pit with Enfinger the first off pit road with a two-tire pit stop.

Truex, who stayed on track, inherited the lead on the restart on Lap 22.

Rhodes got around Truex and Todd Gilliland to take the lead after the restart for the first time in the race.

Kris Wright and Codie Rohrbaugh wrecked in Turn 2 on Lap 26 to bring out the second caution of the race.

The race returned to green on Lap 33 with Rhodes out front followed by Nemechek and Todd Gilliland.

Friesen spun entering Turn 1 after the restart, which immediately brought the caution back out just as Todd Gilliland grabbed the lead. The race returned to green on Lap 37 with Gilliland out front followed by Rhodes and Zane Smith.

With five laps remaining in the stage, Todd Gilliland remained out front with Nemechek in second and Zane Smith third. 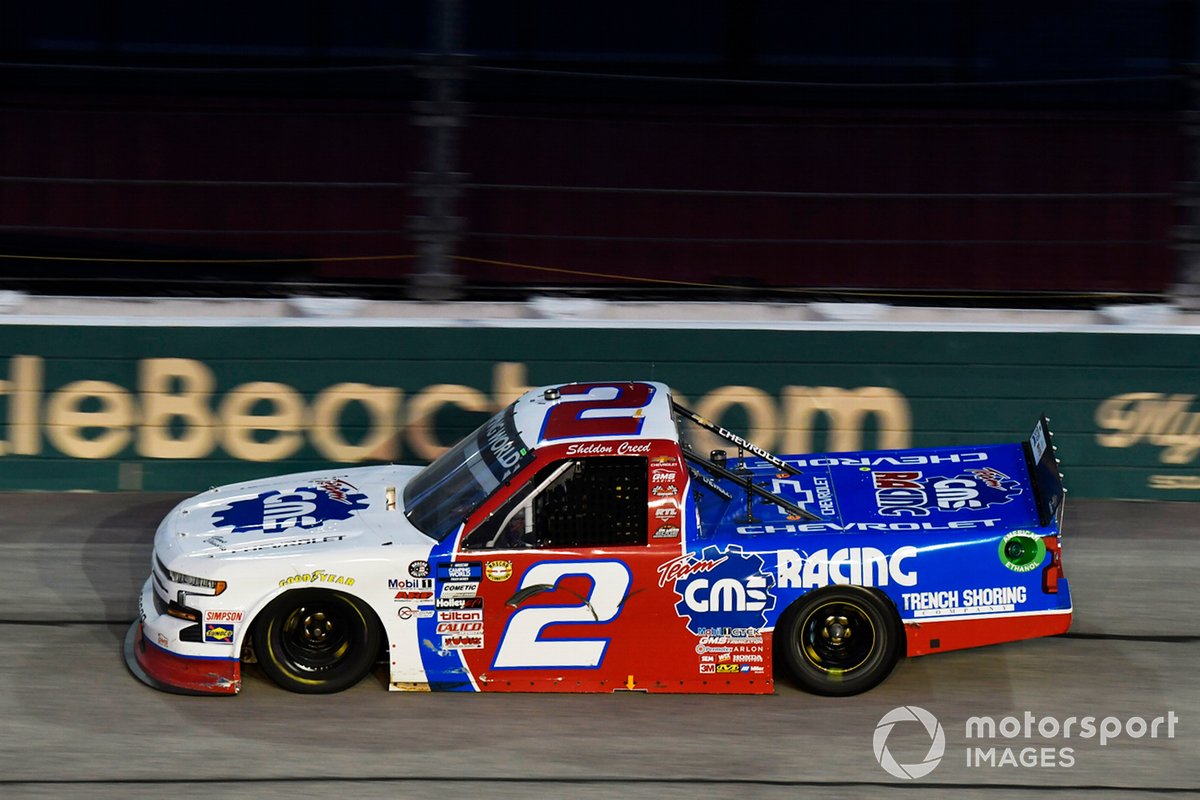