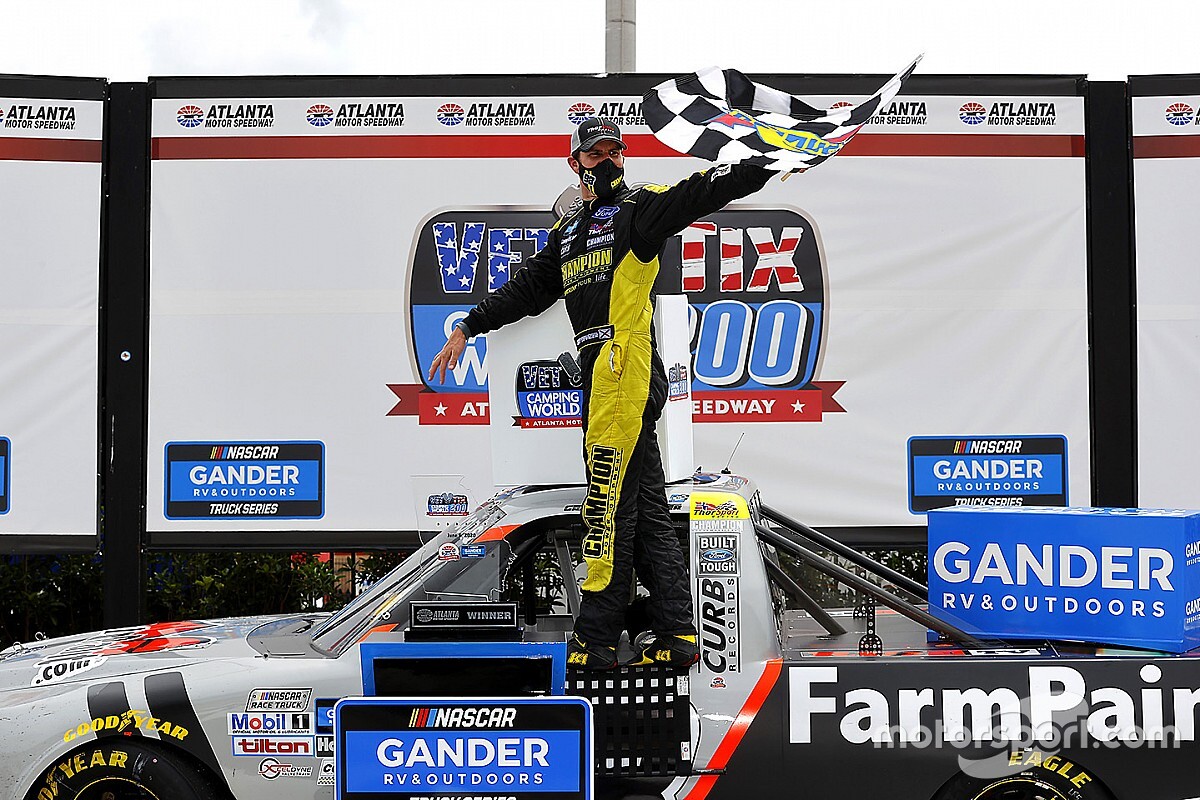 Kyle Busch appeared head to another series win but self-destructed in the final stage with multiple pit road speeding penalties, which left Austin Hill in command of Saturday’s race as it wound to a close.

Chase Elliott spun out with two laps left in regulation to send the race into a two-lap overtime. Enfinger, who restarted fifth, kept pace with Hill on the restart and powered around him on the outside on the final lap to secure the victory.

The win is the second of the season for Enfinger, who also won the season-opener at Daytona International Speedway. It’s the fourth win of his career.

“We didn’t have the best truck on the long run, but we had the best truck on the short run, I feel like,” Enfinger said. “It’s just been a special weekend. Congratulations to my grandparents who are celebrating their 70th wedding anniversary – sorry we couldn’t be there. This one is for them.

“Just an incredible turn of events there. We had the short-run speed and that’s what it came down to. This one means a lot.

“Duke and Rhonda Thorson kept everything going, kept everybody employed with a paycheck through this pandemic to hopefully put ourselves in a good position when we went back racing. Thank you to them.”

Saturday’s race was the second in the Truck series since NASCAR resumed racing without fans on May 17.

With 50 laps remaining in the race, Ross Chastain was working hard to keep Busch at bay. Busch had restarted the final stage on fresh tires and had set a blistering pace through the field.

On Lap 85, Busch – with 10-lap fresher tires than Chastain – finally got around him to move back into the race lead.

A final round of green-flag pit stops began with 36 laps to go. Busch came in as the race leader but was penalized for speeding on pit road and had to serve a pass-through penalty. Elliott also seemed to miss the entrance to pit road on his first attempt.

Busch sped again when serving his penalty and was forced to make a stop-and-go penalty the second time.

Once the cycle of stops was complete, Hill emerged as the leader followed by Chastain and Gilliland.

On Lap 107, Busch was forced to pit road again, this time for a flat tire.

With 20 laps to go, Hill held about a 2-second lead over Chastain with Gilliland in third. On Lap 114, Elliott moved into third.

With two laps remaining, Elliott – who was running third – spun around off Turn 2 to bring out a caution and send the race into a two-lap overtime.

All the lead-lap trucks elected to pit and Hill was the first off pit road. On the restart in overtime, Hill led the way followed by Gilliland, Eckes, Smith and Enfinger.

NASCAR officials disqualified Johnny Sauter's No. 13 Ford following Saturday's Truck race after it failed post-race inspection. Sauter was found to have unapproved modifications to his tires. The penalty moves Sauter from a 17th-place finish in the race to last in the 40-truck field.

Busch claimed the Stage 2 win after getting a jump on a restart with four laps to go and holding off Enfinger.

Kraus was third, Chastain fourth and Gilliland rounded out the top-five.

Following the break between Stage 1 and 2, most of the lead-lap trucks elected to pit but Smith stayed out and inherited the lead. Elliott was the first off pit road.

Both Sauter and Chastain were penalized for speeding on pit road and had to restart from the rear of the field. On the restart on Lap 38, Smith was followed by Elliott, Busch and Sheldon Creed.

Elliott quickly got around Smith on the restart to take the lead for the first time in the race.

On Lap 48, Busch and Elliott swapped the lead with Elliott earning back a small advantage with 9 laps remaining in the second stage.

On Lap 51, Austin Wayne Self spun around exiting Turn 4 and ended up stopped in the middle of the track to bring out a caution.

Many lead-lap trucks pit but Busch stayed out. Creed, Smith and Cory Roper all sped on pit road and had to restart from the rear of the field. On the restart on Lap 57, Busch led the way followed by Gilliland and Hill.

Busch held off a fast-approaching Elliott to take the Stage 1 win.

Eckes finished third, Smith was fourth and Hill rounded out the top-five.

Eckes, who started on the pole, led the first lap until the race was put under caution on Lap 2 when Bryan Dauzat spun on the backstretch.

The race returned to green on Lap 6 with Eckes out front followed by Enfinger and Brett Moffitt.

On Lap 12, Busch got around Eckes off Turn 2 to grab the lead for the first time. Shortly afterward, Dauzat spun again on the backstretch to bring out another caution. Jeb Burton received some damage from the incident.

NASCAR decided to utilize this caution as its competition caution. Most lead-lap trucks elected to remain on the track. On the restart on Lap 17 Busch led the way followed by Eckes and Moffitt.

Eckes quickly powered back into the lead on the restart as Moffitt moved into second.

With 10 laps remaining in the first stage, Eckes had built a 1.3-second lead over Moffitt, but Busch reclaimed second place with nine laps to go.

With 8 laps remaining, Busch reclaimed the lead from Eckes.