Erik Jones eyes a first NASCAR title for himself and KBM 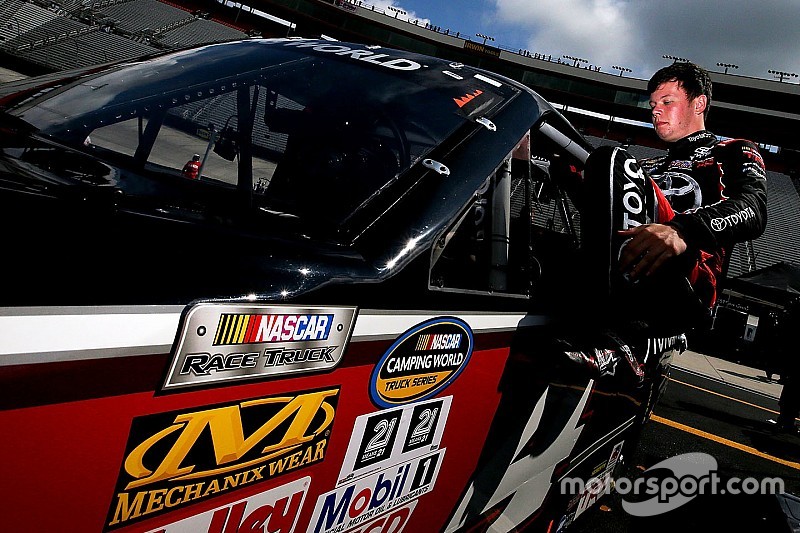 Erik Jones has already been a part of one NASCAR championship with Kyle Busch Motorsports but it’s the next one that can pay big dividends for both the driver and the organization.

There’s no question KBM has produced top-notch rides in both the NASCAR Camping World Truck and Xfinity Series since the organization’s inception in 2010.

In fact, KBM has already won three owner’s championships in the Truck series, most recently last season with its No. 51 team that featured drivers Jones and team owner Kyle Busch.

What KBM hasn’t yet produced – but is in excellent position to this weekend – is its first driver’s title.

Just needing a top 15 to secure the crown

Jones, running fulltime this season, can clinch the Truck championship by finishing 15th or better in Friday night’s season finale at Homestead, Fla. He holds a commanding 19-point lead over second-place Tyler Reddick.

The driver’s title is an honor anticipated as much by the owner as the driver.

“We knew that we had a great opportunity to go for a championship this year. It has worked out so far and we have one more week to see that come to fruition and celebrate our first driver owner championship together and being ‘one team’ up on stage in Miami,” Busch said.

“I look forward to that next week probably more so than Erik might. The pressure is off of me, it’s on Erik. It’s fun to see our organization run like that and compete for championships.”

The championship would be Jones’ first in NASCAR, but that’s a significant accomplishment for a 19-year-old upstart who is also running for rookie of the year honors.

“Obviously, I want to win the championship, but Kyle's wanted a driver's championship since he started his program in the Truck Series and hasn't been able to get it yet,” Jones said.

“If I could bring that back for him, you know, that'd kind of be just a nice ‘thank you’ for the last three years and what he's done for me over those three years.”

It’s been a whirlwind season for Jones, who began the year with a full Truck schedule as well as some planned Xfinity races.

His schedule ballooned with additional Xfinity races as well as a handful of starts in the Sprint Cup Series, standing in for Denny Hamlin at Bristol, Kyle Busch at Kansas, and a suspended Matt Kenseth in the last two events.

Jones has impressed in each series and is expected to run fulltime in the Xfinity Series next season with Joe Gibbs Racing. There have been bumps along the way, but there is no question Jones’ 2015 season has been a solid launching pad for what will likely be a long and productive NASCAR career.

“I think for me the biggest challenge at first was just trying to manage time away from the track, and at the track trying to learn more about truck racing in general and trying to figure out how to put myself in position at the end of the day to have a shot at (winning),” he said.