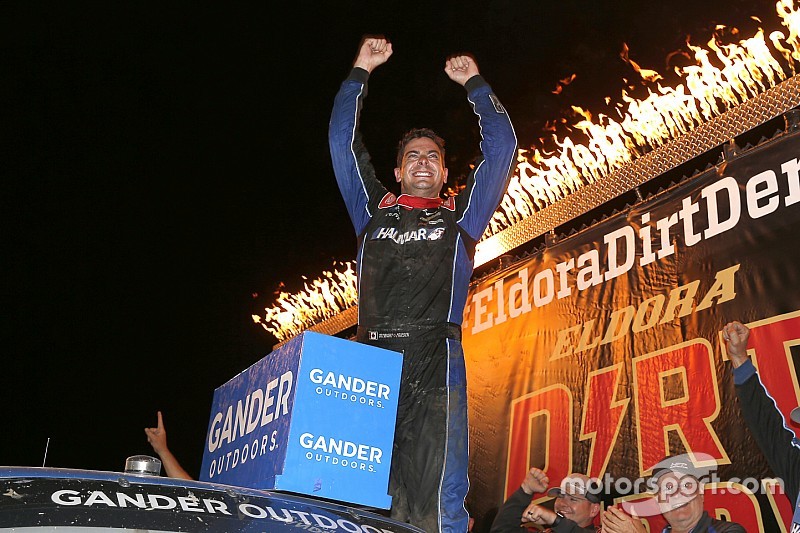 Stewart Friesen scores his maiden NASCAR Truck Series victory in his 63rd career start on the dirt at Eldora Speedway.

After several incidents, the race became a two-lap sprint to the checkered flag with Friesen fending off Sheldon Creed and Grant Enfinger for the win. He led 57 laps en route to the victory, his first in 63 starts.

"Thank you toall the race fans that stuck with us and kept pulling for us," Friesen said in Victory Lane. "Today is the day and this is the week.

"This was meant to be. We needed to get it done on the dirt. We missed it the last two years. What a special event."

With just one race remaining before the playoffs, Friesen is now locked in via Thursday night's victory. Ben Rhodes, Harrison Burton, Todd Gilliland are among those who find themselves in a must-win situation as they are too far out to make it above the cut line on points.

During the break before the final stage, Friesen gambled and stayed out while Briscoe dove for pit road from the race lead with several others.

Friesen restarted with the lead ahead of Ross Chastain and Gilliland, who also did not pit. Briscoe now found himself back in the 12th position.

Chastain went spinning down the backstretch following the restart and although the field avoided his spinning truck, Briscoe sustained rear-end and right side damage as drivers stacked up.

The race resumed with 49 laps to go with Friesen and Gilliland in control, but multiple incidents in rapid succession forced another caution soon after.

As two trucks spun in the back, Strickler spun on his own in Turns 1/2. On the backstretch, another spin by Tyler Dippel collected Johnny Sauter and Briscoe. The contact ended Sauter's night while Briscoe soldiered on, clawing his way back to the front.

The final 35 laps were marred by numerous incidents and eventually became a 12-lap shootout. But that run did not last long either as Briscoe spun off the nose of Rhodes while battling inside the top-five. Strickler and Cobb also spun, forcing the final caution and ultimately, final restart where Friesen would secure the victory.

After the race, tensions overflowed between Dippel and Ben Rhodes as they traded paint on the cool down lap, later escalating into a confrontation in the pits.

Briscoe led the race from pole position and went unchallenged in the early running.

Landon Huffman brought out the first caution for a single-truck spin. Jake Griffin would later spin and set-up a nine-lap shootout.

During the stage break, the strategy was split with the race leader opting to stay out while Gilliland and Moffitt led part of the field down pit road.

Briscoe, Crafton and Chastain were the top-three on the ensuing restart as the pack battled behind them.

Harrison Burton forced another yellow as he spun in the No. 18 machine. During that same yellow, Moffitt came to pit road with overheating issues and fell off the lead lap.

Halfway through the stage, Christian Eckes spun and multiple trucks piled into each other trying to avoid him. Colt Gilliam, Hocevar, Austin Hill and Burton all sustained significant damage in the pile-up.

In the closing laps, Sheldon Creed spun from seventh but the race remained green.

Friesen closed in on Briscoe for the race lead but ran out of time as the green and white checkered flag waved, handing defending race winner Briscoe another stage win.

Friesen and Creed to get dirt rematch after Eldora 1-2