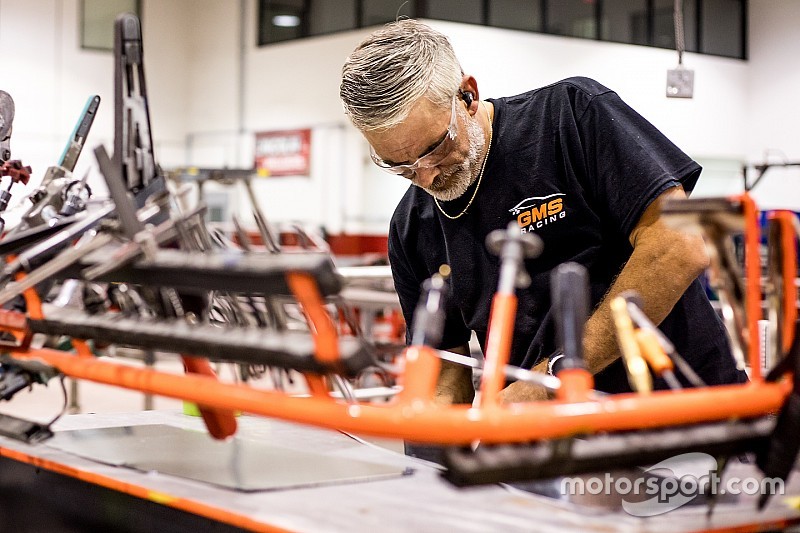 When Mike Beam became general manager of GMS Racing, one item he wanted to bring in-house was complete fabrication and building of the trucks his team would use in the NASCAR Camping World Truck Series.

Judging by the performance of the team over the past few seasons, it was a smart decision.

Beam brought in Swift to manage the fabrication and assembly shops as production manager and Swift enjoys the challenge.

“We have to be very organized and operate a tight schedule but we have a great group of people who work very hard,” said Swift. “You have to have good people, good communication and a good schedule and we have all of that here at GMS.”

Swift also added his team is one of the very few that has brought a lot of the fabrication in-house now in the Truck series.

“We feel it’s a big advantage to have our operations in house,” said Swift. “Not many teams build their own chassis and hang bodies anymore and we feel this helps us maintain race-winning and championship contending teams each week.”

Swift explains why having the ability to build everything at their shop located in Statesviile, N.C., makes a big difference.

“Almost everything on the truck is sheet metal and we can build everything within the tolerances we have set in our shop,” said Swift. “We feel building our own pieces we know for a fact that everything we produce meets our tolerances and this saves us time and resources.

“If we were to get some pieces from outside the shop, they could come in and not meet our specifications and we would have to rework them to fit our trucks like we want them and that would just take away time preparing and fine tuning our trucks for races.”

Sauter, who won the 2016 Truck Series championship driving for GMS, appreciates the hard work and dedication by Swift and his team.

“I’ve said it a 100 times and I’ll say it again, races are won on Mondays and Tuesdays back at the shop,” said Sauter. “The biggest thing you have in a team are the people that work there and how the team is structured and operates.

“The success we have as a team is a product of a lot of hard work by Barry and everyone at the shop. You have to have a good horse to ride each week and it means the world to me to have the quality of equipment I have to drive.”

Rookie contender Stewart Friesen echoes many of Sauter’s comments about the team, however he speaks as a newcomer and not a veteran, and that really helps him and his young team compete up front in the series.

“Our allegiance between our team (HFR) and GMS is awesome,” said Friesen who has competed for wins this season, highlighted by a pole and runner-up finish at Texas Motor Speedway earlier this year. “We have speed every time we go to the track and that helps me as I’ve had to compete on track for the first time a lot this season.”

Friesen is thankful for Swift and the entire group back at the shop.

“Everyone at GMS keeps pushing hard and giving us great trucks each week and I’m excited to get to go some tracks coming up on the schedule that I’ve been to before so I will have some experience on the track and great trucks prepared by Barry and his team at GMS.”

Swift credits several team members who lead various areas in his department in maintaining and building the vehicles for competition.

“We have a dedicated group of people at GMS who all care about the job they do and it shows,” said Swift. “We have some experienced people in various departments that do a great job each week and continue to work hard putting the best product we can on the track.

“You’re only as good as the people you have working with you and I’m fortunate to have a dedicated group of people who share the same vision Mike has for doing the best job you can and giving your best all the time,” said Swift.