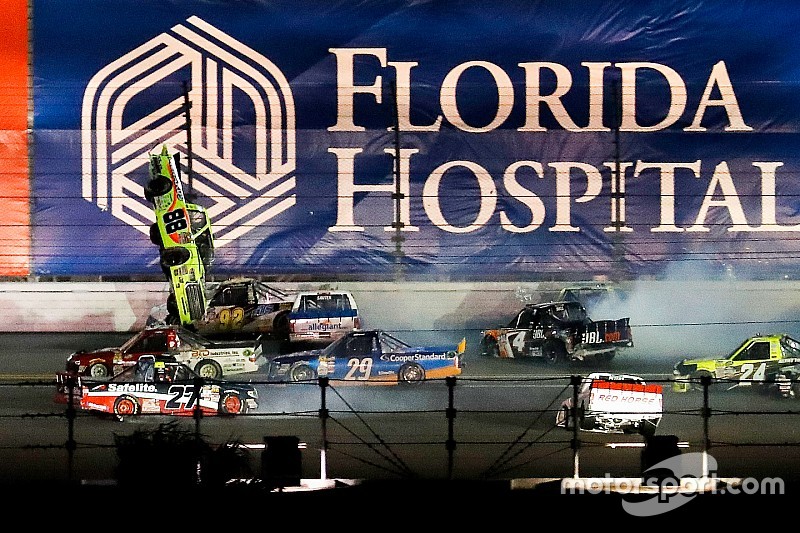 With the win, he became the youngest winner of a NASCAR national series race - Monster Energy Cup, Xfinity and Trucks - at Daytona.

Grala, who won the pole earlier in the day, emerged as the race winner when a multi-car wreck erupted on the backstretch and placed the NextEra 250 under caution.

Grala, 18, avoided the melee and was leading when the caution flag was displayed. It’s his first career win in his 10th career start.

“That was freaking awesome! I can’t believe we won Daytona,” Grala exclaimed in Victory Lane. “I couldn’t see a lot there. I knew it was a little bit risky. It was the last lap and we had to do what we had to do.

“I saw coming out of (Turn) 2 it was getting crazy. There wasn’t going to be any way I was going to be lifting (off the accelerator). I just went low, closed my eyes and crossed my fingers a little bit.

“Luckily, it worked out for me. I just can’t believe it. It’s so surreal.”

Austin Wayne Self finished second, Chase Briscoe third, John Hunter Nemechek – who was involved in a caution with six laps remaining – ended up fourth. His father, Joe Nemechek, rounded out the top-five.

“It feels pretty good, almost like a win,” said Self, who was never in contention for the win until the final lap. “I wanted one more spot. We put this (ride) together like three weeks ago. It’s been an exciting week leading up to this.

“You never know what to expect when you get to Daytona. When all hell broke loose, we were in the right spot.”

Matt Crafton led the way on the start of the final lap when Grant Enfinger tagged Ben Rhodes from behind to trigger the wreck, which sent Crafton’s truck airborne. It landed on all four tires, however.

Johnny Sauter dominated this 20-lap segment and easily held off his GMS Racing teammate, Grala, to take the checkered flag and the one playoff point that comes with it.

Just before the completion of the stage, John Hunter Nemechek appeared to cut a tire and was forced to take his truck down to pit road for repairs.

Gallagher tagged Brett Moffitt as the first 20-lap segment drew to an end which allowed Sauter to move past both to win the first stage and the one playoff point that comes with it.

Peters was second, Rhodes was third, Grala fourth and Briscoe ended up fifth.

The field had just completed the first lap of the race when Austin Cindric got in the back of Noah Gragson, which sent Gragson down the track and ignited what turned out to be a 17-truck wreck.

“I was riding probably around seventh or eighth at the time on the outside and just got popped from behind, it felt like, going through one and two. (Cindric) got me,” Gragson said.

“He hit me, got me sideways and then I tried not getting into (Ben Rhodes) in front of me, but it was not our night tonight I guess.”

Several other top contenders were collected in the incident, including Cindric, Gragson, John Hunter Nemechek, Ryan Truex and Tyler Young.

The race turned to green on Lap 11.

Alex Bowman gets a Truck ride for Atlanta