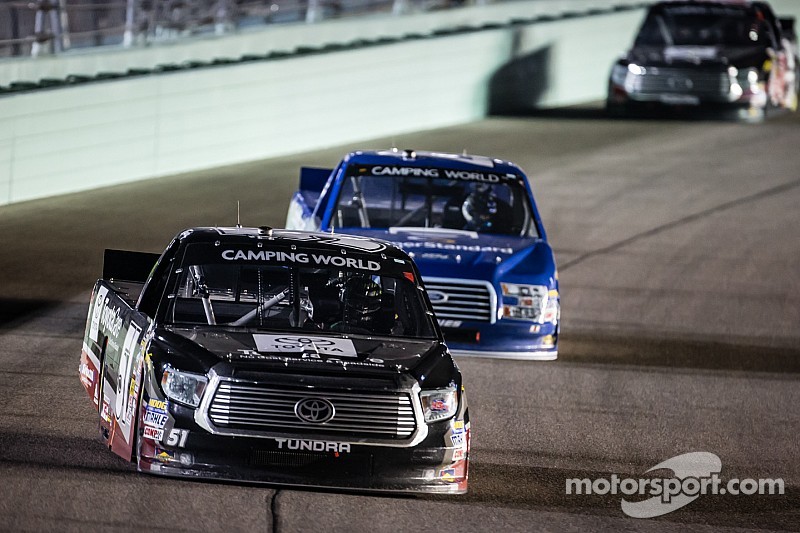 Jerry Baxter moves to the 51 team.

Kyle Busch Motorsports (KBM) announced today that veteran crew chief Jerry Baxter will move over to call the shots for the back-to-back reigning NASCAR Camping World Truck Series Owner's Champion No. 51 team and the addition of Shannon Rursch as crew chief for Sunoco Rookie of the Year candidate Justin Boston's full-time effort for 2015 in the No. 54 Tundra. The two join Ryan "Rudy" Fugle, who was previously announced as the crew chief for Erik Jones' full-time campaign next season behind the wheel of the No. 4 Tundra, as the signal callers for the team's three-truck effort next season.

Baxter joined KBM at the beginning of 2013 and served as crew chief for the No. 54 Tundra team with Darrell Wallace Jr. the last two seasons. Under the veteran's guidance, Wallace Jr. finished third in the Truck Series championship standings in 2014 and led all series regulars in wins (4), laps led (623), driver rating (109.5) and fastest laps run (280). Combined in two seasons, the duo posted five wins, three poles, 963 laps led, 14 top-five and 26 top-10 finishes across 44 starts. The California native, who will be one of six members that will be inducted into the West Coast Stock Car Hall of Fame in 2015, will have team owner-driver Kyle Busch, Daniel Suarez and Matt Tifft sharing the seat of his No. 51 Tundra next season.

"Jerry came to KBM with a history of success working with young drivers and Darrell thrived under his tutelage the last two seasons," said Busch. "Now, he'll get the chance to mentor Daniel (Suarez) and Matt (Tifft) -- two more young guys with a lot of potential -- and with Eric's (Phillips) departure he and Rudy will take on some added responsibility on the competition side."

"I'm proud of what we were able to accomplish with Darrell the last two seasons and looking forward to the opportunity to be able to continue to run up front and challenge for wins with Daniel, Matt and Kyle next year," Baxter said. "Kyle really puts a lot into this team -- not just as an owner, but as a driver and a teammate -- and I'm really excited about the opportunity to not only work with him in the development of two more talented young drivers, but to now also be able to work directly with him as his crew chief for his four races next year."

To KBM from TSM

Rursch comes to KBM from Turner Scott Motorsports (TSM), where he most recently served as crew chief for the No. 31 team in the NASCAR Nationwide Series. In addition to his time atop the pit box for the Nationwide Series team in 2014, he collected three top-10 finishes in four starts calling the shots for TSM in select Truck Series events last season. The Iowa native is a 2004 graduate of the NASCAR Technical Institute (NTI) and upon his promotion in July became the first alumnus of the school to be named a crew chief in one of NASCAR's top three divisions. The 10-year veteran of the sport got his start as a mechanic at Sadler Racing in 2004 and then served as a car chief at Evernham Motorsports, Phoenix Racing and Robby Gordon Motorsports before moving to the same position at TSM in 2010.

"Shannon is highly praised among his peers in the garage and before being promoted to the crew chief position last season had gained valuable experience as a car chief for several seasons working alongside some very smart people," Busch said. "While we had a very successful 2014 season, we know that the rest of the Truck Series will be gunning for us next year and in order to remain on top we need to continually improve our equipment and have a forward-thinking approach. We feel like bringing in a talented individual with a fresh perspective like Shannon and teaming him up with Jerry and Rudy, who have been key players in our recent accomplishments, will help us achieve continued success."

"I'm really honored to be joining KBM -- an organization that has a proven track record of being able to win races and championships," Rursch said. "I'm looking forward to the opportunity to come in and learn what has made them so successful and hopefully bring a few things to the table. I don't see any reason why Justin can't go out and win some races and be a leading contender for the Rookie of the Year Award with the equipment we have in place and the resources available to us from Toyota."

In 2014, KBM set a Truck Series record for wins by an organization in a single season with 14. The team's trio of Tundras will tackle the 2015 Truck Series season beginning with the NextEra Energy Resources 200 at Daytona (Fla.) International Speedway on Feb. 21.

German Quiroga, a Mexican racer fighting to make it in the world of NASCAR