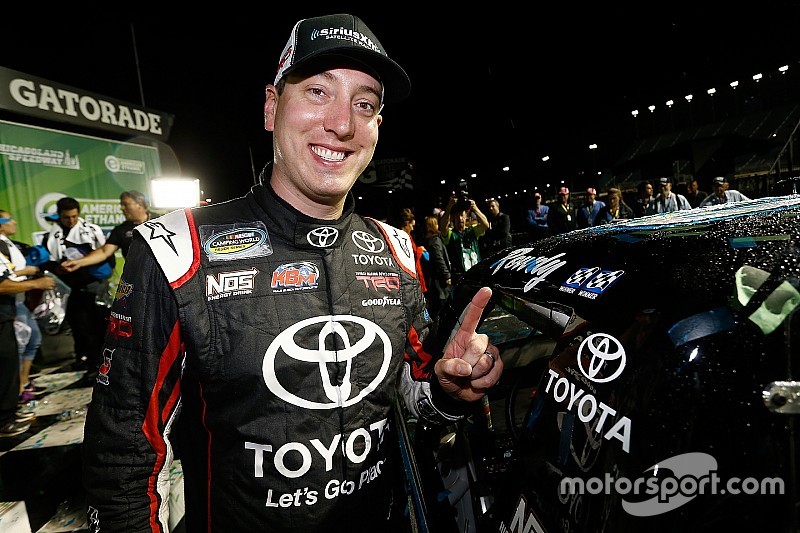 Kyle Busch wasn’t eligible to compete in the Camping World Truck Series’ inaugural championship Chase but he and his Kyle Busch Motorsports organization still had a large role to play.

Busch held off Daniel Hemric and a hard-charging Cameron Hayley – who needed a win to make the eight-driver Chase field – in a wild overtime to win Friday night’s American Ethanol 225 at Chicagoland Speedway.

Busch’s victory was assured when a caution was displayed on the final lap after Rico Abreu spun out. The win is the 46th for the all-time series leader and his second victory in four races this season.

Bell and his KBM teammate, William Byron, both qualified for the Chase. Joining them in the field are Matt Crafton, Sauter, Ben Kennedy, John Hunter Nemechek, Hemric and Timothy Peters.

“This has been a really good place for us and KBM over the years. We’ve been fast here and it was good to come out here again and get that speed going,” Busch said in Victory Lane.

“It was really important to see (Byron) and (Bell) make the Chase this year for KBM. We’ve got two opportunities to go after the championship.”

Hayley comes close, but no cigar

A KBM truck almost prevented Busch for earning the win. The truck Hayley was driving was a new KBM truck ThorSport Racing had recently purchased. “That thing was fast,” Busch said. “It was hard to hold him off.”

Hayley said his team worked throughout the race to give him a chance at the end to contend for the win.

“We really battled the whole race,” he said. “They gave me a great truck at the end. That’s why (Busch) is a great Cup driver. I’ve got a lot to learn from that guy. He blocked my every move and it was all I could do.

Hayley went to Victory Lane to congratulate Busch after the race.

Several contenders for the win were taken out in an incident with 39 of 150 laps remaining.

Sauter got into his GMS Racing teammate, Kennedy, while they were racing for second place, which sent Kennedy into the path of Ben Rhodes and Crafton, who both also got collected in the wreck.

“I don’t think I touched him that hard,” Sauter said over his team radio after the wreck.

The race was immediately placed under a red flag for an enormous amount of debris on the track and damage to the SAFER barrier.

The race returned to green with 33 laps remaining with Busch in the lead followed by Daniel Suarez and Spencer Gallagher.