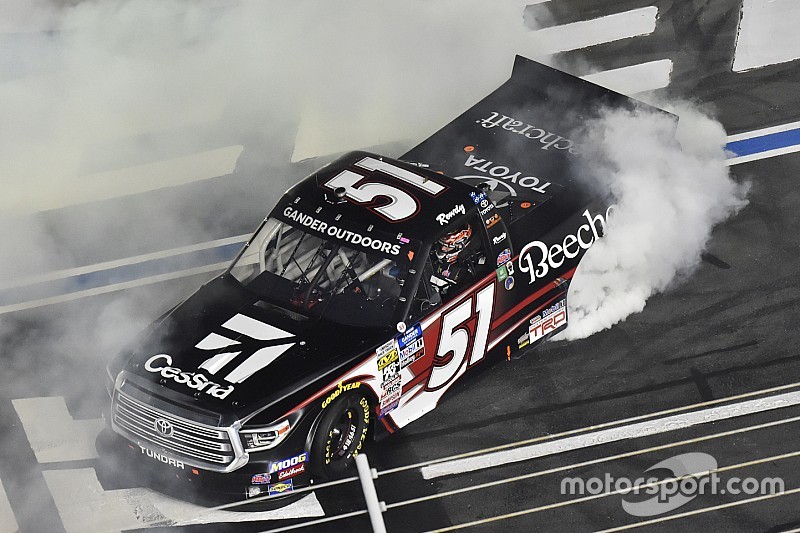 It was a perfect ending to a perfect abbreviated season for Kyle Busch in the Gander Outdoors NASCAR Truck Series.

Busch passed Ben Rhodes with 39 of 134 laps remaining and held off Brennan Poole in a three-lap shootout at the finish to win Friday night’s N.C. Education Lottery 200 at Charlotte Motor Speedway.

Busch, a regular in the Monster Energy NASCAR Cup Series, is only allowed five starts a year in Trucks and he completed his 2019 schedule with a victory in each one. He also won at Atlanta, Las Vegas, Martinsville and Texas.

"I wish I could do more," Busch said in Victory Lane. "I can't say enough about everyone at Kyle Busch Motorsports and Rowdy Manufacturing. This Tundra was awesome tonight - it was flying and it was fast.

"We worked on it a lot in practice. We were a little off when we unloaded and we tried to make it better and better and better. We made improvements. That's what's good about me driving and Rudy (Fugle) crew chiefing - these guys do a great job working on it and we just keep getting better.

"Happy Birthday to (his son) Brexton - he'll be four tomorrow. It's awesome to have him here tonight and we'll celebrate."

The win was the 56th of his career (he is the all-time series leader) and the eighth at Charlotte.

On Lap 78, a multi-truck accident involving Gus Dean, Korbin Forrister and Angela Ruch put the race under caution. Only a handful of lead-lap cars elected to pit.

The race returned to green with 52 laps remaining and Busch in the lead, followed by Crafton and Friesen.

On Lap 85, a caution was displayed for debris on the track. Most of the lead-lap trucks elected to pit with Todd Gilliland the first off pit road, thanks to taking just fuel-only.

The race restarted with 44 laps to go and Ross Chastain in the lead – one of several who elected to stay out.

On Lap 91, Johnny Sauter powered to the lead after a 3-wide battle for the lead and one lap later, Rhodes got around Sauter to take the lead.

Busch ran down and passed Rhodes on the outside off Turn 2 with 39 laps remaining to reclaim the top spot.

With seven laps to go, debris from Brett Moffitt’s truck brought out a caution. Most lead-lap cars stayed out and Busch still held the lead when the race restarted with three laps remaining.

Once Busch returned to the lead, he had little trouble out front and easily held off Chastain to win Stage 2.

“We worked really hard today to make this truck faster,” Busch said during the stage break. “We sought some balance, and we worked on it, made some good changes and now we’re haulin' here under the lights.”

Following the break between Stages 1 and 2, Crafton elected not to pit and remained in the lead when the race restarted on Lap 36.

Enfinger powered to the lead on the restart and Chastain then got around Enfinger to take the top spot on Lap 38.

Busch ran down Chastain on Lap 40 to retake the lead.

With 15 laps remaining in Stage 2, Busch maintained a 1.2-second lead over Chastain with Enfinger running in third.

Busch’s lead over Chastain ballooned to more than 2-seconds with 10 laps to go in the second stage.

Crafton passed Gilliland in Turn 3 on the final lap to take the Stage 1 victory.

Gilliland had led the way when the race restarted with two of 30 laps remaining in the stage but couldn’t hold off Crafton’s advance.

Enfinger was third, Rhodes fourth and Chastain completed the top-five.

Rhodes grabbed the lead on the start thanks to a 3-wide move only to see Gilliland grab it back on Lap 2.

On Lap 5, Busch got around Gilliland and took the lead for the first time.

Ten laps into the first stage, Busch had moved out to almost a 2-second lead on Gilliland with Rhodes running in third.

With 15 laps remaining in the stage, Busch’s lead over Gilliland had blossomed to more than 3 seconds.

On Lap 19, Busch reported a “subtle vibration” in his No. 51 Toyota but his speed was not affected.

Natalie Decker hit the wall on Lap 24 to bring out the first caution of the race. Crafton was the first off pit road but Gilliland elected not to pit and took over the lead when the race restarted with two laps remaining.

Both Spencer Boyd and Austin Wayne Self started the race from the rear of the field for unapproved adjustments to their trucks following qualifying.