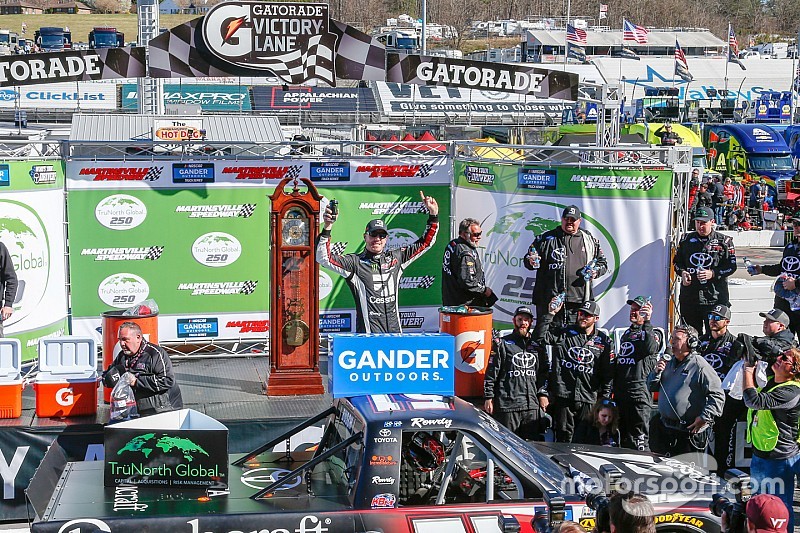 A last-lap caution secured Busch’s victory in Saturday’s TruNorth Global 250 at Martinsville (Va.) Speedway, making him a perfect 3-for-3 in the series so far this season.

Busch was fighting off a stiff challenge from Ben Rhodes on the last lap when Reid Wilson spun and brought out the caution after Busch had taken the white flag.

The win is the 54th for Busch, who is the series’ all-time wins leader.

"These guys worked really, really hard this weekend. When we unloaded, I didn't like where we were at," Busch said. "We made wholesale changes to this thing all weekend long. We just kept trying to make it turn better through the center.

"That's where it's at Martinsville, you have to be able to turn the center without getting too loose in (the corner) and too loose off. During the race, I would get underneath some guys and get loose and I saw some other guys get loose.

"We were able to get by them and get through them and have enough tire there at the end to be able to hold them all off."

With 65 of 250 laps to go in the race, Busch finally was able to get around Chastain and reclaim the lead.

Four laps later, Daniel Sasnett spun for the second time as Johnny Sauter dashed to pit road with a flat left-rear tire. Busch remained on the track and led the way on the restart on Lap 199, followed by Chastain, Rhodes and Myatt Snider.

Busch held a more than 2-second lead over Chastain with 40 laps to go in the race. Rhodes ran third, Moffitt fourth and Friesen.

On Lap 211, Cory Roper spun off Turn 2 to bring out a caution. Busch led the way on the restart with 35 laps remaining.

With 15 laps to go, Busch’s lead over Rhodes grew to more than a second as Chastain ran in third, nearly 3 seconds behind the leader.

Moffitt moved into the third position with 10 laps remaining as Busch maintained a 1.3-second led over Rhodes.

On Lap 243, Tyler Dippel spun off Turn 2 and ended up pointing the wrong way on the track. On the restart with three laps to go, it was Busch, Rhodes, Moffitt, Chastain and Friesen.

Chastain held off a fast-approaching Rhodes to earn the stage victory, his first in Truck Series competition.

Following the break between Stages 1 and 2, Busch was the first off pit road but Hill stayed out and took over the lead when the race returned to green on Lap 80. He was followed by Busch, Friesen and Chastain.

Matt Crafton was penalized for an uncontrolled tire during his stop and restarted from the rear of the field.

Busch quickly moved ahead of Hill to retake the lead as Chastain moved into second.

With 50 laps to go in the stage, Chastain remained in second but less than a second behind Busch. Friesen ran in third.

With 40 laps to go, Chastain remained close behind Busch as Friesen continued to run third and Hill in fourth.

Busch finally was able to push his advantage to over a season on Chastain with 30 laps remaining in the stage.

Sasnett spun in Turns 3 and 4 to bring out a caution with 23 laps remaining in the stage. Busch was the first off pit road, followed by Chastain. The race returned to green on Lap 124 with Friesen in the lead.

On Lap 132, Chastain got around Busch to move into the lead for the first time.

Friesen, the pole winner, was able to stay out front the first eight laps of the race before Busch finally got around him to take the lead on Lap 9. Sheldon Creed moved up to third.

With 40 laps remaining in the first stage, Busch had built up a more than 2-second lead, while Sauter had moved up to second. Friesen was in third, followed by Creed and Todd Gilliland.

Creed got shuffled back to 11th following contact with Gilliland and Hill with 30 laps to go in the stage. Busch continued with a sizable advantage over Sauter.

With 20 laps to go in the first stage, Busch had a more than 3 second lead over Sauter as Friesen remained in third.

Sauter began complaining he may have a cylinder down with 10 laps remaining in the first stage. He remained in the runner-up position behind Busch.

On Lap 63, caution was displayed for Dean, whose truck had flames erupt from the rear end going through Turns 1 and 2. A lot of fluid was dropped on the track and there appeared little chance the race would restart before the conclusion of the stage.

An afternoon to remember for Raphael Lessard