Matt Crafton looking for a second "sweet victory" at Eldora 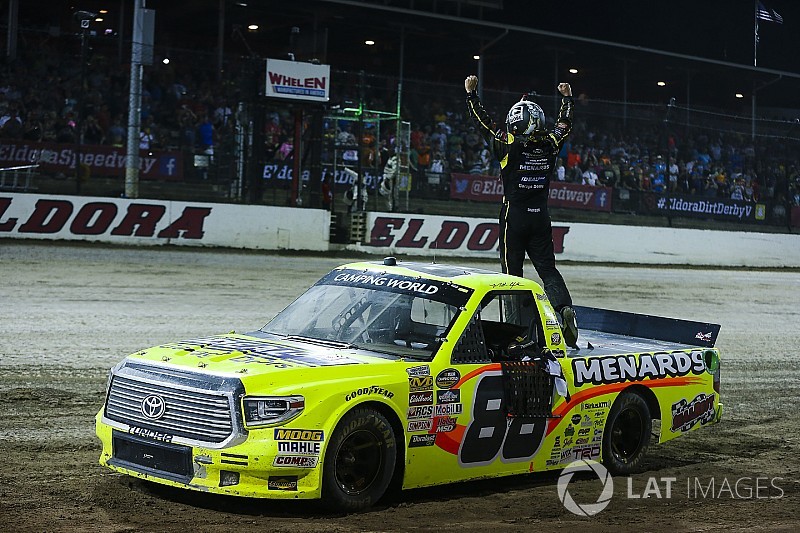 Matt Crafton’s most recent win in the NASCAR Camping World Truck Series is probably also his most unlikely.

Crafton’s only win in the 2017 came on the dirt at Eldora Speedway and it’s also his most recent. He remains without a victory so far this season.

Crafton, 42, is currently seventh in the series standings with five top-10 finishes in 12 races. He has won at least one race the last five consecutive seasons.

A repeat victory in Wednesday night’s Eldora Dirt Derby would again lock him into the series playoffs and perhaps this time, it wouldn’t seem so out of the blue.

“I came from an asphalt background, and I’ve raced some dirt in the last four or five years just because I knew we were going to Eldora,” Crafton said. “I just went and bought my own dirt car, just bought my own modified and went and raced, oh, 12, 15 races last year and put a lot of focus on it.

“I thought that was such a cool race to be able to win and get that golden shovel and that trophy and say we won on asphalt; we won on dirt; we’ve won some other places. So, that was a very sweet victory for sure.”

While Crafton believes many of the drivers entered in this year’s race have an advantage with their vast experience racing on dirt, he still sees an opportunity to leave Eldora a winner again.

“There’s got to be a lot of the dirt ringers, if you want to call them that, and the guys that race dirt every week. They’re going to be very tough, and hopefully they race with respect and don’t tear you up,” he said.

“That’s some of the things that I worry about. A lot of them are coming out here, and it’s going to be their one shot to drive a truck. They’re going to get to come to Eldora, and hopefully they respect us like we would respect them if we came into their series on one of their big shows.

“We definitely should be able to repeat if we put ourselves in the right position.”

Chase Briscoe to tackle the "Daytona of dirt racing" at Eldora