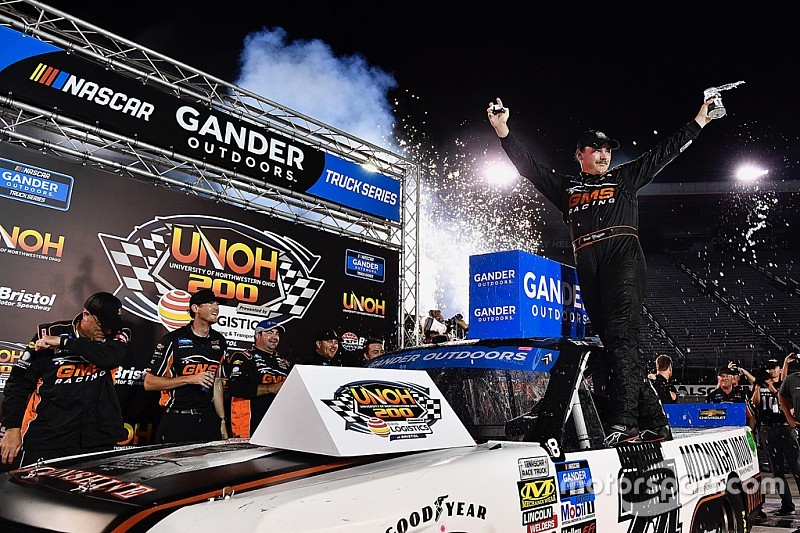 Moffitt led 66 laps en route to the win, his third of the 2019 season and tenth of his career. The victory also secures his place in the second round of the playoffs.

The final stage kicked off with a jumbled up running order. First, Chastain was sent to the rear of the field with a safety violation on pit road.

Ben Rhodes and Parker Kligerman were the first two drivers off pit road with two tires while Grant Enfinger and Sheldon Creed stayed out.

Chastain drove back up to 15th as Tyler Dippel and Brennan Poole collided behind him, forcing another yellow.

As the laps ticked away, the contact got more frequent and tempers flared throughout the pack. Two playoff drivers in Matt Crafton and Stewart Friesen ended up getting together, sending the latter spinning.

Several other incidents slowed the final stage including a spin by Raphael Lessard while battling for position with Chastain inside the top-five.

With 11 laps to go, the red flag was called after Natalie Decker's truck was actually spun out by a wrecker that was attempting to push her back to the pits.

The race resumed with 11 laps to go, but soon returned to yellow as Sam Mayer ended up against the outside wall.

This set-up a three-lap dash where Chandler Smith briefly challenged Moffitt before the reigning series champion drove off with the race win.

There was an incident within the first five laps as Gus Dean went spinning, causing Sheldon Creed to get into the back of Jesse Little, who went spinning as well.

Chastain was able to take the lead on the following restart and held off Moffitt for the stage win as they sliced through slower traffic.

While the leaders opted to stay out, Sauter pitted from third and a handful of trucks came with him.

On the restart, Moffitt was able to take the lead from Chastain on the outside just before another caution for a spinning Angela Ruch.

Soon after, a playoff contender would find himself in trouble as Sauter got into Nemechek, sending him into the outside wall. Nemechek came back across the track and clipped Sauter's truck, causing right side damage.

Chastain made his way back to the lead but had trouble getting around Sauter, who was desperately trying to stay on the lead lap. Moffitt and Chastain traded the lead multiple times as both drivers tried to find a way around the No. 13 truck, culminating in a last-lap pass on the outside by Moffitt to take the stage win.