GMS Take on Trucks: The winning combination of Sauter and Shear 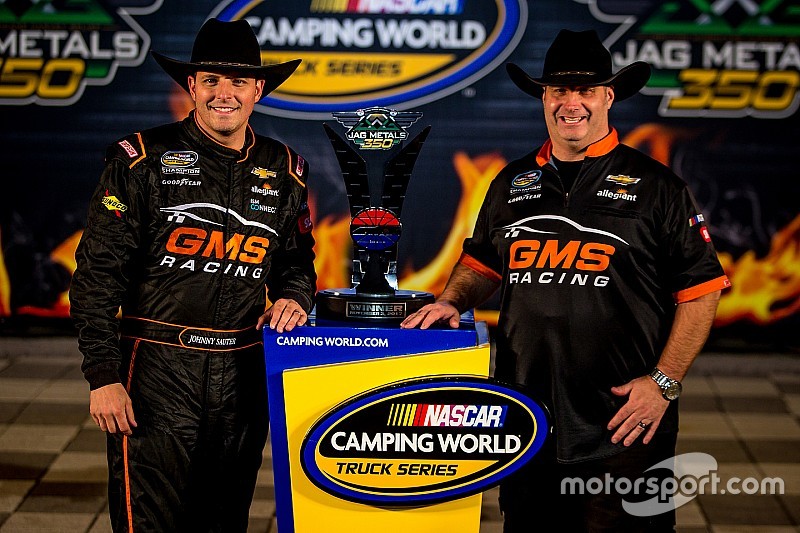 Joe Shear Jr. and Johnny Sauter are a potent combination for GMS Racing in the NASCAR Camping World Truck Series.

A lot of teams in the series have talented people and race-winning equipment. GMS Racing has all of those components, but they also have a pairing that separates them from everyone else - driver Johnny Sauter and veteran crew chief Joe Shear Jr.

No driver-crew chief combination has won more this season than those two and both men offer reasons why their close bond produces benefits for their race team.

Sauter has proven to be the class of the field this season in Trucks, having already scored three wins in the first seven races  and will compete Friday night at Texas Motor Speedway where Sauter has won two of the last three Truck races at the 1.5-mile track.

“Texas has become one of my favorite places to race,” Sauter said. “Whatever it is, we just seem to hit on something each time we go.”

Shear adds that the success at Texas is a product of doing what they do each week to prepare for a race.

“We really don’t do anything different when we go to Texas but what we do (to prepare for the race) seems to work there,” said Shear. “We just try not to screw it up.”

While GMS Racing provides the resources Shear needs to build Sauter fast Trucks, it takes more than speed to win in NASCAR. It also takes chemistry between the driver and crew.

“Johnny and I go way back as our families raced against one another years ago and we’re just two hard-nosed Midwest racers,” Shear said. “I think our family history and our history working together has built a mutual respect for one another.

“I also feel that we know each other so well sometimes he doesn’t even need to talk to me directly, I can tell he needs something (for the truck) just by the way Johnny is talking over the radio.”

Sauter is also quick to credit his friend and leader of the team that won the 2016 championship after Shear became crew chief seven races into the season.

“We have a good idea of where we need to be when we show up,” said Sauter. “Joe has a great feel for setups and knowing how the track is going to change and what direction we need to move in.

“As the race goes on we find ourselves in the right place balance-wise. Hopefully, I’ve done my part and we’ve got the track position to make something happen from there.”

As for Texas, he feels the track not only highlights his ability as a driver, but also displays the hard work done to build the GMS Racing program into a team that contends for wins in every race.

“You look back to when I got to GMS and how far we’ve come to this point,” said Sauter. “Texas is a place where it really shows. You know when we show up we’re going to be fast in qualifying and the race, it’s just a matter of which team.

“Last fall is a great example of that, running up front with Justin Haley, he won the pole for that race. Unfortunately, we had an incident that set both of us back early on. You hate to have that, especially with a teammate, but we got on our own pit strategy and both ended the race up front and that’s a testament to just how strong this organization is there.”

For Shear, racing in Texas this week also carries a personal presence.

Shear’s late wife, Chandra, was from the Dallas-Fort Worth area of Texas, will always have a special place in his heart for this race after losing her last December.

“I’ve looked forward to going back to Texas because Chandra was from the area and she has a lot of family there,” said Shear. “”It would be great to get a win there.”