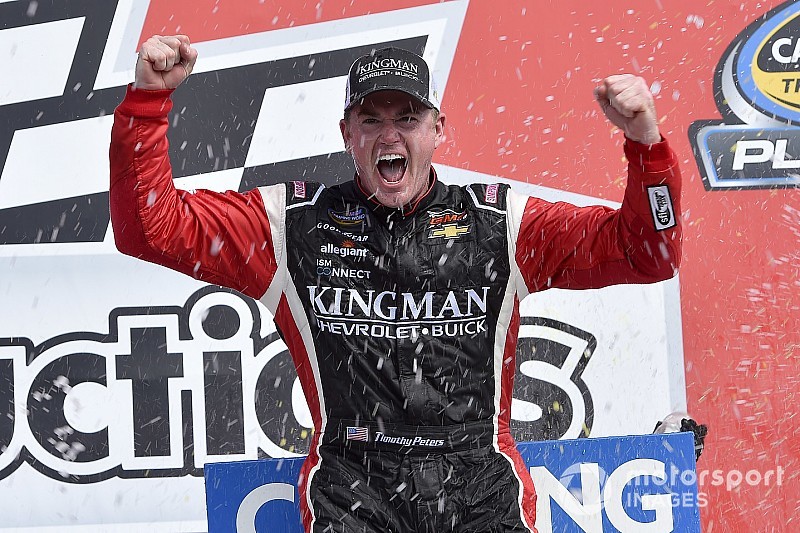 Timothy Peters had no intentions of curtailing his full-time career driving in the NASCAR Camping World Truck Series but he didn’t have a say in the decision.

Peters began the 2017 season competing once again with Red Horse Racing, but five races into the season, owner Tom DeLoach elected to shut the organization’s doors due to lack of sponsorship.

“You know Tom had to make a decision that really a lot of owners probably don’t like to make, and I respect that 100 percent,” Peters said Friday at Martinsville (Va.) Speedway.

“I had a nine-10 year run there and its’ more than probably what most folks can say and I’m still friends with Tom. I understand and were still really good friends to this day.”

Since then, Peters has competed sporadically in Trucks with various teams and made one start in the Monster Energy NASCAR Cup Series.

In 242 career Truck starts, Peters has 11 wins, 59 top-five and 125 top-10 finishes and won eight poles. He finished a career-best second in the series standings in 2012 and was fifth in 2017 when Red Horse Racing closed its doors.

Two weeks ago, Peters took part in what he thought would be his final racing opportunity of the 2018 season, driving a GMS Racing entry at Talladega (Ala.) Superspeedway and ended up in Victory Lane – his first series win since the 2015 season.

It served as a poignant reminder of how much he still wants to remain a fulltime competitor.

“Not that I lost confidence, but it rejuvenated it. Racing is a humbling sport,” Peters said. “The person that can take the good and the bad and if you can cope with that and don’t let it really play too many mind games with you, it makes you better going forward.

“I’m 38 years old and it’s like I said after Talladega, I feel like I’m 18. The fire still burns deep in me to win and want to be competitive.”

Although he thought the Talladega race was his last, GMS Racing presented him an unexpected opportunity to compete again this week at Martinsville, about 30 miles west of his home in the Danville, Va., area.

Asked if the continued opportunities with GMS Racing could lead to a full-time ride in 2019, Peters said, “I’d sure like to say I hope so. I’m enjoying the moment right now, but not that I know of.

“Hopefully, the win helped, but I’m very thankful for the chances I’m getting. I hope it turns it can turn into something because I want to be in this series. I love truck racing.

“I want to win races and have a shot at a championship.”

Take a lap around Martinsville Speedway courtesy of NASCAR Heat 3: