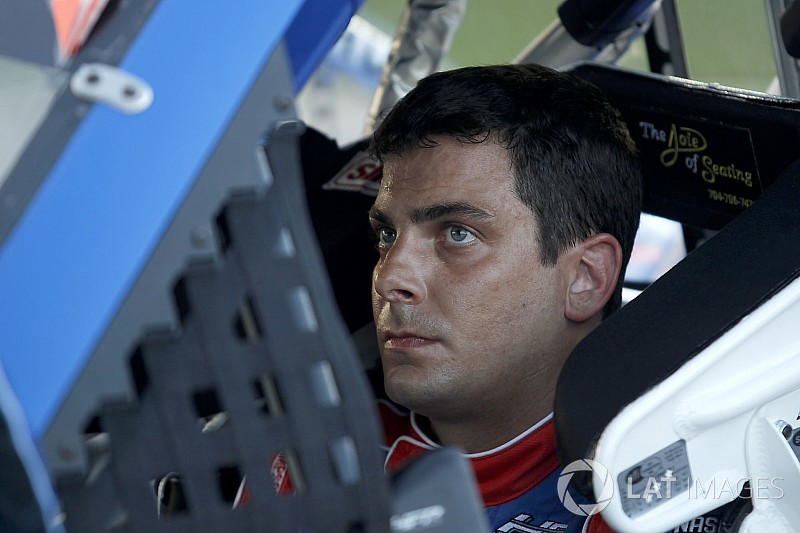 Friesen won the pole. He won his heat race. He led 95 of the 150 advertised laps at the Big E and even won the second stage. But the 33-year-old Niagara-on-the-Lake, Ontario native could not catch former Camping World Truck Series champion Matt Crafton in the closing laps of NASCAR’s only dirt race in a national series.

“We had a good day yesterday and we had that race circled on our calendar all year and we worked hard to get in contention,” said Friesen. “We got the truck really comfortable in practice and produced good results in qualifying and in the race.”

From the pole, Friesen quickly jumped out to the lead. He held the point for the first 33 laps of the race before Matt Crafton passed the No. 52 Halmar International Chevy Silverado and won Stage 1.

Friesen regained the lead twice. He was out front when the final caution was called with 15 laps remaining in the race. The yellow flag was a game changer for Friesen.

“The top groove came in late in the race and Matt was able to take advantage of that on the final restart and with that groove cleaned up he was able to use that and get a great run on me and take the lead,” said Friesen. “Second-place sucks but I’m proud of our performance yesterday as a team.”

Following three DNFs in four races, the Halmar Friesen Racing team took a two-race sabbatical to regenerate. The decision paid off with a career-best 12th-place performance for Friesen at Kentucky which the team topped with a second-place run from the pole at Eldora.

“We struggled a little bit and took some time off to regroup with (crew chief) Tripp Bruce and the guys and got our trucks better,” Friesen added.

While Friesen might have surprised some fans with his strong run at Eldora, his execution came as no surprise to his followers from southern Ontario, Canada and upstate New York where he’s been racing for years.

“I’ve gotten tons of messages and texts from people in Canada and New York today and it’s been great,” Friesen said. “I’m proud to represent southern Ontario and all the big block modified racers I’ve raced with and against in New York and all over the place.”

Friesen wasted no time returning to action. He climbed back in a modified on Thursday night. As for the remaining truck schedule, Friesen said the team will evaluate each event on a race by race basis.

“We’ll be at Pocono next week and then we’ll see from there,” said Friesen. “We just want to keep getting better.”

Matt Crafton relishes "out of the ordinary" Truck victory at Eldora