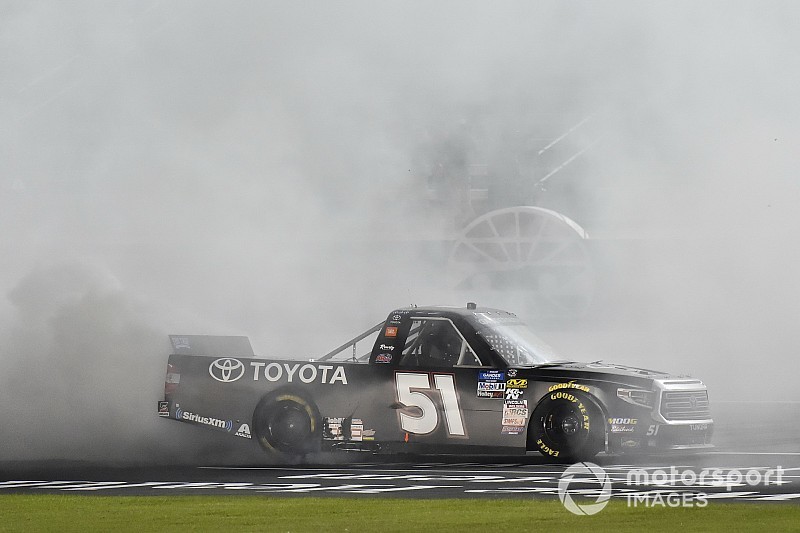 Has Greg Biffle’s return to Victory Lane in the Gander Outdoors NASCAR Truck Series opened the door to him doing more races?

Timing may not be on Biffle’s side.

Biffle’s win at Texas Motor Speedway in Kyle Busch Motorsports’ No. 51 Toyota was his first series start for the veteran since 2004 and first series win since October 2001.

The victory also netted him an extra $50,000 bonus as part of this year’s Triple Truck Challenge. If Biffle entered and won the next two races, he could walk away with a total of $500,000 – an interesting prospect for team owner Kyle Busch to consider.

“A lot of things would have to fall into place,” Busch said Saturday at Michigan International Speedway of Biffle running the next two events at Iowa and Gateway.

“If we had an off-week before Iowa it would be a hell of a lot easier. For me to have five trucks to go to Iowa? I don’t know if we can do it.”

Regardless if more races are to come, Biffle said he was impressed with the organization Busch had put together and was appreciative of the opportunity.

“It’s not easy to win these, but I can see how Kyle has done very well.”

'It was not easy'

Biffle ended up scoring the win by stretching his fuel after navigating a race that featured a race-record 13 cautions.

“It was not easy. I had my work cut out for me. At the beginning of the race, so much odd stuff happened,” he said. “We ran five laps at a time and then the caution would come out. There was a lot of people wrecking in front of me and behind me.

“I was just trying to keep the truck clean and stay out of trouble. Then we got four-wide off of Turn 2, and I didn’t know you could do that here. We beat the fenders in a bit, but the Mobil 1 Toyota ran really good.”

Asked if he thought he would show up at Iowa, Biffle said: “I don’t know. I think they have a plan together for all (four) of the trucks to run, but we will just have to wait and see what happens.”

NASCAR said Saturday afternoon that according to the entry blank, entries must be received for the Iowa race by June 4. Since there was no entry for Biffle made for that date, even if he ran the event, he would not be eligible to receive the Triple Truck Challenge bonus. There is still time, however, for him to enter the race at Gateway so if he ran it and won, he could receive the bonus.

Roundtable: The racing was closer at Michigan, but was it better?